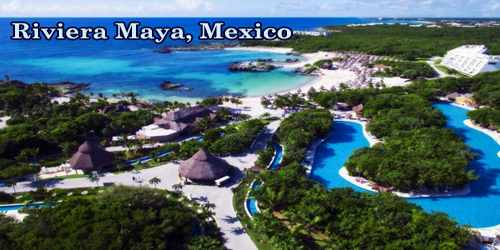 Riviera Maya (Spanish pronunciation: ri’βjeɾa ‘maʝa) is an area in Mexico located on the Yucatan Penisula. It is a tourism and resort district south of Cancun, Mexico. It straddles the coastal Federal Highway 307, along the Caribbean coastline of the state of Quintana Roo, located in the eastern portion of the Yucatán Peninsula. Historically, this district started at the city of Playa del Carmen and ended at the village of Tulum, although the towns of Puerto Morelos, situated to the north of Playa del Carmen, as well as the town of Felipe Carrillo Puerto, situated 40 kilometres (25 mi) to the south of Tulum, are both currently being promoted as part of the Riviera Maya tourist corridor.

The word ‘Maya’ or ‘Mayan’ that is associated with this geographic area pays homage to the indigenious culture that reigned over this area from 2000 BC until the Spanish arrived from Europe. Mayan art, architecture, mathematics and astronomical calendars still present some of the world’s greatest mysteries to researchers and historians. Decendents of the Mayans still live in area communities here today. Visitors can walk back in time and visit the ruins of the great Mayan pyramids and civilizations at places like Tulum, Chichen Itza and Coba. 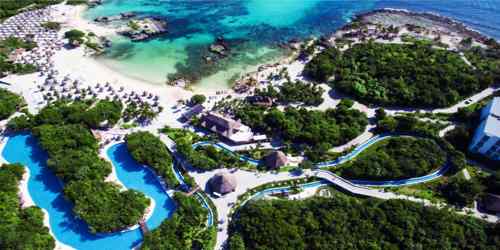 The Riviera Maya is famous for its large scale all-inclusive resorts and a historical tourism base of smaller boutique hotels as well as the many fine-dining restaurants available along the Fed 307 and on or near the beaches. Luxury travel entities have been instrumental in increasing luxury villa rentals and yacht charters in the area however these only represent a small fraction of the total tourism accommodation available.

Tourism is a huge revenue maker for the Mexican government and tourism areas like the Riviera Maya are very well protected. Government development plans include establishing a number of medium-sized cities of ~200,000 inhabitants within the Riviera Maya with initial planning spanning 20 years. Target areas for urbanization include the towns and villages of: Puerto Morelos, the Riviera Maya), Puerto Aventuras, Akumal, Chemuyil, and Tulum.

A major attraction throughout the Riviera Maya are coastal and reef aquatic activities dependent on the coastal water and the Mesoamerican Barrier Reef System (also known as the Belize Barrier Reef) which begins near Cancun and continues along the whole length of the Riviera Maya continuing southward to Guatemala. This barrier reef system is the second longest in the world.

Water sports abound here. Just offshore along the Riviera Maya is the Playacar reef. This is one of the largest barrier reefs in the world, second only to the great barrier reef of Australia (and a lot closer to home!). Snorkeling and scuba diving rank high on everyone’s “to do” list that visit here. The jungle here offers cenotes which are caves that offer even more unique diving and snorkeling experiences. In addition there are zip lines, quad tours, hiking, biking and ecological parks for your family to enjoy.

A cenote is a natural sinkhole developed over millions of years, the result of limestone rock collapses which uncover a body of water. Today, they serve as hidden subterranean swimming pools that make for a magical feeling of being lost in another world. Their waters are so pure and clear that underwater photographers go nuts to snap them.

Archeology is also a big tourist draw in the area, including the popular archeological sites operated by the Instituto Nacional de Archeological such as Tulum on the coast, and Chichen Itza and Coba located some distance inland. The self-named ecoparks of Xcaret and Xel-Ha also include some smaller archeological ruins as part of their attractions, but these natural water theme parks operated by private business consortia attract much larger crowds due to the diversity and range of activities provided, such as swimming with captive dolphins. 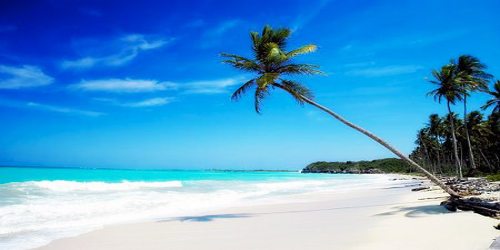 A trip to the Riviera Maya can’t be complete without a visit to Cobá’s 1,500-year-old Nohoch Mul, the Yucatán’s tallest pyramid or a visit to Chichen Itza, which was a large pre-Columbian city built by the Maya Civilization. Although climbing the top may prove difficult, it will be well worth it. While you’re here, enjoy breathtaking views of miles of jungles, lakes, and of other temples in the city. Be sure to bring enough water, a study pair of shoes, and insect repellents! All archaeological sites are only open from 8 am to 5 pm so make sure to come on time.

The average annual temperature in Mexico hovers around 26o C, which may reach to 35o C in the summer. The highest temperatures are recorded between the months of May and August, while September and October make up the raining season. While the Caribbean coast of the Yucatán experiences a large number of tropical storms and hurricanes, the storm tracks and therefore landfalls of these are divergent to both the north (Cancun) and the south (south of Tulum and down to Belize) striking generally outside the Riviera Maya. Groundwater and therefore cenote water temperatures are 25 °C (77 °F) year round. Coastal waters range from 26 °C (79 °F) in January to 29 °C (84 °F) in August.

The Riviera Maya is completely within the state of Quintana Roo on the Yucatán Peninsula of Mexico. The terrain is flat and covered by low tropical jungle. The geology is high purity carbonates down to a depth of 0.5 – 1.5 km below the surface. Mean annual rainfall is 1.5 m per year and the efficient infiltration results in the complete absence of any surface rivers.

Most tourists to the Riviera Maya arrive through Cancún International Airport, approximately 50 km (31 mi) north of Playa del Carmen. About 20 kilometres (12 mi) north of Tulum, a new international airport was announced. In March 2011, the bidding for construction contracts was to be concluded.

As of April 2014, all projects related with the Tulum Airport are no longer available through official sites. The high speed trans-peninsula train is now the main project for the area.