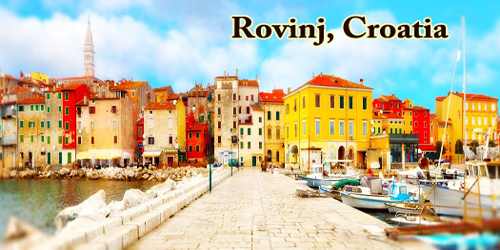 Rovinj (Croatian pronounced (rǒʋiːɲ); Italian: Rovigno, Istriot: Ruvèigno or Ruveîgno, Ancient Greek: Ρυγίνιον (Ryginion), Latin: Ruginium) is one of the most popular and most developed tourist resorts in Croatia. It is a jumble of pale yellow and pink buildings perched on a peninsula in the Adriatic Sea in Croatia’s northern Istria region. Winding cobblestone lanes crisscrossed with laundry hanging on the line lead up to the hilltop of St. Euphemia Church. The soaring bell tower that pierces the sky is a symbol of the city and the views from the top stretch all the way to Italy.

Located on the western coast of the Istrian peninsula, it is a popular tourist resort and an active fishing port. Istriot, a Romance language is once widely spoken in this part of Istria, is still spoken by some of the residents. The town is officially bilingual, Italian, and Croatian, hence both town names are official and equal.

The old town is built on the island, which was only connected with the mainland in the 18th century. Known as one of the most picturesque and romantic towns on Mediterranean, over the last few decades Rovinj attracts a large number of tourists, most of them faithfully returning year after year.

It is very likely that Rovinj is much older, emerging somewhere at the turn of the 3rd and the 4th centuries, and maybe even at an earlier period, since in the 1st and 2nd century B.E. proofs of life on the island had been found. “Castrum Rubini” was certainly located at today’s site of the parish church of St.Euphemia. During this period, Istria was occupied by the Romans who stayed there until 476, when the invasions of the Huns, the Ostrogoths and in 539 of the Byzantine started. The inhabitants refuged to the island of Rovinj (Ruigno, Ruginio, Ruvigno) which at that time had around a hundred inhabitants. Nearby, a place named Cissa existed, the so-called Rovinjian Atlantis, which probably somewhere in the 6th or 7th century sank as a consequence of an earthquake, so that the inhabitants of Cissa populated the island of Rovinj. Regarding the existence of Cissa many legends overlap, although its existence has never been proven. Cissa is still alive in the stories of local fishermen, whose nets very often catch a fragment of an amphora or a brick on the place where the town supposedly sank. 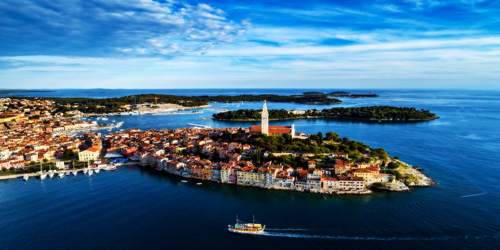 Rovinj was eventually incorporated into the Byzantine Empire, later becoming part of the Exarchate of Ravenna in the 6th century, before being taken over by the Frankish Empire in 788. For the following several centuries it was ruled by a succession of feudal lords, and in 1209 it was acquired by the Patriarchate of Aquileia under Wolfger von Erla.

From 1283 to 1797 Rovinj was one of the most important towns in Istria governed by the Republic of Venice. During this period three town gates were constructed and Rovinj was fortified by two rows of defensive walls, remains of which can still be seen today. Nearby the Rovinj pier one can find one of the old town gates, the Balbi’s Arch, dating from 1680, and a late-Renaissance clock tower. The first city statute was proclaimed in 1531.

In the mid 18th century Rovinj had more than eight thousand inhabitants and thus there were also more houses than there used to be in other similar towns at the Adriatic Sea. Because of the high number of inhabitants and pilgrims, today’s parish church St. Euphemus was built. In 1797 the Venetian republic lost its power and for a short time, Istria is first under Austrian (until 1805) and then under Napoleon’s rule. From 1809 to 1813 Istria was a part of Napoleon’s Illyrian Provinces.

In 1813 the Austrians took their power back and a period of industrial and urban development started. In 1852 Rovinj built cement production facilities, in 1872 a tobacco factory followed, in 1878 a wax factory was built and in 1882 a glass and sardine factory were erected. At that time, the shipbuilding industry was in full stride, and the southern part of the town even had six smaller shipyards, of which one is still working today. In 1865 Rovinj built a theater as well, in 1888 a hospital was built, and in 1891 the construction of a Sea biology institute followed. Many inhabitants of Rovinj went to Pula in the 19th century, which at that time was the biggest naval port in the Austria-Hungary monarchy.

According to the last Austrian census in 1911, 97.8% of the population was Italian-speaking. It then belonged to the Kingdom of Italy from 1918 to 1947, when it was ceded to SFR Yugoslavia, as part of SR Croatia. The original town name Rovigno was then changed into Rovinj. During the post-war period, many Italian inhabitants left Rovinj, which led to significant changes to the city’s demographic structure.

Following Croatia’s independence in 1991, the town became one of the most important centers of Istria County, an administrative unit encompassing most of Istria. Rovinj is today the third most populous town in the county, behind Pula and Poreč.

In the past 40 years, Rovinj has developed into a real tourist center thanks to its nature, the well-indented coast and a large number of islands, interesting surroundings, its pleasant Mediterranean climate, the variety of accommodations and tourist attractions and its cultural-historical values. All of this makes Rovinj an ideal holiday destination, which has been proven by many acknowledgments by a large number of guests and by many awards of various tourist associations and patrols.

From May to September Rovinj receives more than 10 sunshine hours a day. The rainfall averages 941 mm (37.05 in) a year and average air humidity is 72 percent. Originally the peninsula on which the city lies was an island, separated from the mainland by a channel. The latter was filled in 1763. Rovinj Archipelago includes 22 islets. 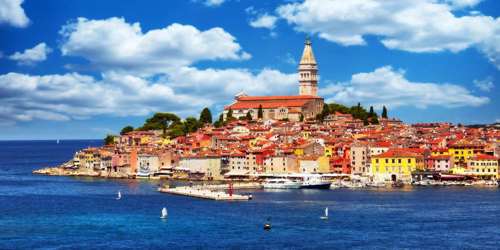 Along the rocky shore, the translucent sea splashes the coastline, which invites brave swimmers to dive in headfirst in the heat of the day. In the late afternoon, as the local fishermen head out to sea in hopes of a catch, people gather along the coastline to watch the sun sink into the horizon.

Scrumptious seafood is heaped on plates at sea view restaurants and family-run pizzerias hidden on small squares serve piping hot pies cooked in wood-burning ovens. The Italian influence is strong and so are the truffles and local brandy, called rakija.

The main economic activity in Rovinj is tourism and during peak season (May–September), its bars, restaurants, and art galleries work long hours, while operating limited hours off-season. The busiest area is the very center of Rovinj, extending from the main bus station towards the old part of town, where most bars and clubs are located. The town’s main central thoroughfare is the fully pedestrian Carrera Street, with many independent shops and art galleries. A farmer’s market is located at the edge of the historic part of town, near Valdibora Square.

Rovinj manages to combine, in a very interesting way, its rich tradition with modern times. As it is also an active fishing port, visitors can experience the atmosphere of a small fishing village, especially during the popular fishermen’s festivities or at one of the traditional taverns called Spacio (in the past, very popular among fishermen). On the other hand, the town has been developing exquisite gastronomy and offers a high standard of tourist services in general.

The city at the foot of the Church of St. Euphemia is the favorite gathering place of artists from around the world. Walking down its streets, visitors will bump into many art galleries and studios, whilst once a year, in August, you have the possibility to attend the largest open-air exhibition of the Adriatic coast, which takes place in one of the main old-town streets – Grisia.

The historic core of the city is limited to pedestrian foot traffic, and bikes can be used to explore the nearby vineyards and parks. Rovinj exudes simple pleasures and a peaceful atmosphere of life by the sea.