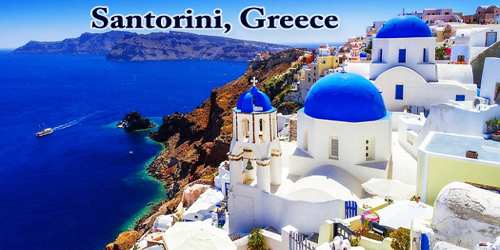 Santorini (Greek: Σαντορίνη, pronounced (sandoˈrini)), officially Thira (Greek: Θήρα (ˈθira)) and classic Greek Thera (English pronunciation /ˈθɪərə/), is a small Greek island that has become one of the most popular travel destinations all over the world. It is an island in the southern Aegean Sea, about 200 km (120 mi) southeast of Greece’s mainland. It is the largest island of a small, circular archipelago, which bears the same name and is the remnant of a volcanic caldera.

Santorini forms the southernmost member of the Cyclades group of islands, with an area of approximately 73 km2 (28 sq mi) and a 2011 census population of 15,550. The municipality of Santorini includes the inhabited islands of Santorini and Therasia, as well as the uninhabited islands of Nea Kameni, Palaia Kameni, Aspronisi and Christiana. The total land area is 90.623 km2 (34.990 sq mi). Santorini is part of the Thira regional unit.

Encircling a sea-filled caldera, spectacular Santorini scores top points for dramatic beauty. Bleached white villas tumble down volcanic cliffs. Blue-domed churches rise against the sparkling sea, and bright sprays of bougainvillea add to the eye-popping canvas of color. Perched atop the black lava cliffs, the settlements of Firá and Oia are the island’s most picturesque, and pricey, destinations, and Oia ranks among the most photographed locations in the world. Other highlights of the island include Akrotíri Archaeological Site, Ancient Thira, the black sand beach of Perissa, and of course, the sublime sunsets. Sailing into this stunning caldera surrounded by soaring sea cliffs makes an unforgettable first impression. 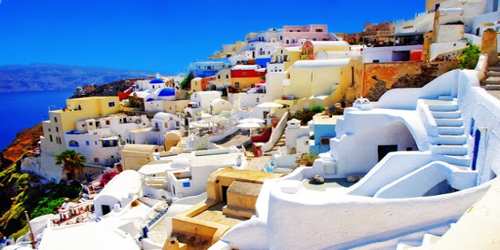 The islands that form Santorini came into existence as a result of intensive volcanic activity; twelve huge eruptions occurred, one every 20,000 years approximately, and each violent eruption caused the collapse of the volcano’s central part creating a large crater (caldera). The volcano, however, managed to recreate itself over and over again. Santorini islands is still an active volcano (the same as Méthana, Mílos and Nísiros).

The last big eruption occurred 3,600 years ago (during the Minoan Age), when igneous material (mainly ash, pumice and lava stones) covered the three islands (Thíra, Thirassiá and Asproníssi). The eruption destroyed the thriving local prehistoric civilization, evidence of which was found during the excavations of a settlement at Akrotíri. The solid material and gases emerging from the volcano’s interior created a huge “vacuum” underneath, causing the collapse of the central part and the creation of an enormous “pot” today’s Caldera with a size of 8×4 km and a depth of up to 400m below sea level.

The eruption of the submarine volcano Kolúmbo, located 6.5 km. NE of Santorini, on 27th September 1650, was actually the largest recorded in Eastern Mediterranean during the past millennium! The most recent volcanic activity on the island occurred in 1950. The whole island is actually a huge natural geological/volcanological museum where you can observe a wide range of geological structures and forms!

Santorini was named by the Latin Empire in the thirteenth century, and is a reference to Saint Irene, from the name of the old cathedral in the village of Perissa the name Santorini is a contraction of the name Santa Irini. Before then, it was known as Kallístē (Καλλίστη, “the most beautiful one”), Strongýlē (Greek: Στρογγύλη, “the circular one”), or Thēra. The name Thera was revived in the nineteenth century as the official name of the island and its main city, but the colloquial name Santorini is still in popular use.

A visit to Santorini is the ultimate gastronomic experience, as the island is a true culinary paradise! Treat visitor’s taste buds to some famous traditional products like cherry tomatoes, white egg plants, fava, caper and “hloró tyrí”, a special kind of fresh goat cheese found on the island, or why not try some of the exceptional wines produced from grapes grown in the volcanic soil of the island! Assyrtiko, Athyri, Aidani, Mantilaria and Mavrotragano are just some of the distinctive varieties that visitor can taste at the island’s famous wineries (some of them operate as a museum as well) or at restaurants.

The present municipality of Thera (officially: “Thira”, Greek: Δήμος Θήρας), which covers all settlements on the islands of Santorini and Therasia, was formed at the 2011 local government reform, by the merger of the former Oia and Thera municipalities.

Santorini is considered to be the most sought after place for a romantic getaway in Greece, since there are not many places in the world where visitor’s can enjoy exquisitely clear waters while perched on the rim of a massive active volcano in the middle of the sea! The island has a growing reputation as a “wedding destination” for couples not only from Greece but from all over the world. A trip to Santorini with the other half is a dream for anyone who has seen at least one photo of the island’s famous Caldera and exchanging kisses beneath Santorini’s famous sunset is the ultimate romantic experience!

Fira also plays a significant part in the history of Santorini. It was a very important base for naval officers. The scenic town has some old ruins which include some Greek and Roman architecture. Also, some relics which were used during the Byzantine era were also displayed here. After the Strongoli sank, the remaining part of the island which was inhabited by the Phoenicians who lived in Fira for over a century before the Laconians which migrated from Peloponnese overtook the town.

Other famous smaller villages are Akrotíri and Méssa Vounó, with their famous archaeological sites, Pýrgos, Karterádes, Emporió, Ammoúdi, Finikiá, Períssa, Perívolos, Megalohóri, Kamári, Messariá and Monólithos: some of the villages are cosmopolitan some more peaceful; they are surrounded by vast vineyards; whitewashed cliff-top towns with castles affording amazing views out over the Aegean. Soaking up the villages’ distinctive traditional atmosphere is a very rewarding experience. 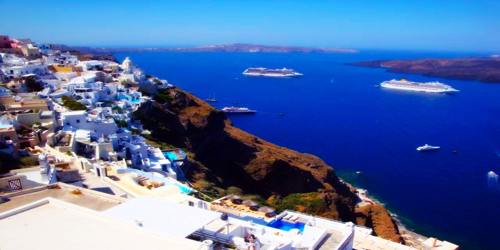 A landmark structure in Santorini that has stood the test of time is the Monastery of Profitilis. The Monastery has been in existence since the Ottoman era. The monastery has a museum and provides sweeping views of the entire island. Other hallmarks structures include a castle that was built during the Venetian era and some Byzantine churches. Prior to the volcanic eruption that occurred on the island. It was initially called Strongoli. Strongoli was called ‘home’ by the Minoans during the Neolithic era. Years later, the island’s name was changed to Thera(Thira) and the Kalliste which translates to ‘the most beautiful one’ before the current name, Santorini was adopted.

Volcanism on Santorini is due to the Hellenic Trench subduction zone southwest of Crete. The oceanic crust of the northern margin of the African Plate is being subducted under Greece and the Aegean Sea, which is thinned continental crust. The subduction compels the formation of the Hellenic arc, which includes Santorini and other volcanic centres, such as Methana, Milos, and Kos. Santorini has a semi-arid climate (Bsh in the Köppen climate classification) with Mediterranean characteristics. Total rainfall averages 371 mm (14.6 in) per year. In the summer season, strong winds can also be observed.

During the Second World War, Santorini was occupied in 1941 by Italian forces, and in 1943 by those of the Germans. In 1944, the German and Italian garrison on Santorini was raided by a group of British Special Boat Service Commandos, killing most of its men. Five locals were later shot in reprisal, including the mayor.

The name ‘Santorini’ was coined from two words ‘Santa’ which means ‘Saint’ and Irenene which means ‘Irene.’ The name is believed to be that of a church located in the Valley of Therassia. The cataclysmic eruption caused the middle of the island to sink resulting in a very deep crater known as ‘the Caldera.’ The Crater is 1,310 feet deep. The volcano which caused the Caldera some 3,000 years ago is still very active. The most recent eruption occurred in 1956. The resulting earthquake caused a tiny village called Rocca to sink into the sea.

Venture into Santorini’s seaside treasures and enjoy deep blue waters and beaches with white, red or black sand or volcanic pebbles, spectacular rock formations and impressive lunar landscapes. The island was featured in The 2005 film “The Sisterhood of the Traveling Pants”. Santorini Film Festival held annually at the open air cinema, Cinema Kamari in Santorini.