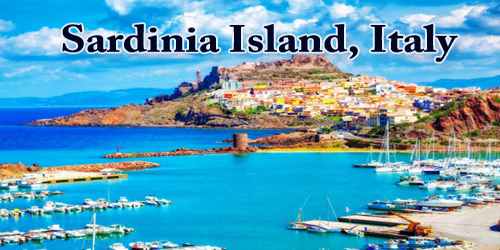 Sardinia (/sɑːrˈdɪniə/ sar-DIN-ee-ə; Italian: Sardegna (sarˈdeɲɲa); Sardinian: Sardigna (saɾˈdiɲɲa) or Sardìnnia (saɾˈdinja); Sassarese: Sardhigna; Gallurese: Saldigna; Algherese: Sardenya; Tabarchino: Sardegna), island and regione (region) of Italy, second in size only to Sicily among the islands of the western Mediterranean, and is located west of the Italian Peninsula, north of Tunisia, and to the immediate south of the French island of Corsica. It lies 120 miles (200 km) west of the mainland of Italy, 7.5 miles (12 km) south of the neighboring French island of Corsica, and 120 miles (200 km) north of the coast of Africa. The capital is Cagliari. Area 9,301 square miles (24,090 square km). Pop. (2015 est.) 1,658,138.

Sardinia is home to the largest canyon in Europe, Gola su Gorropu; prehistoric archaeological sites; the captivating Catalan-tinged town of Alghero; and the medieval streets of Cagliari, the capital. 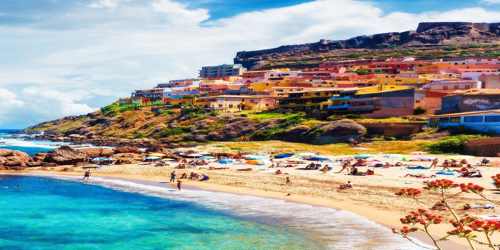 The region of Sardinia is one of the five in Italy that enjoy some degree of domestic autonomy, granted by a specific Statute. Its official name is Regione Autonoma della Sardegna (Sardinian: Regione Autònoma de Sardigna, lit. “Autonomous Region of Sardinia”). It is divided into four provinces and a metropolitan city, with Cagliari being the region’s capital and also its largest city. Sardinia’s indigenous language and the other minority languages (Sassarese, Gallurese, Algherese Catalan, and Ligurian Tabarchino) spoken on the island are recognized by the regional law and enjoy “equal dignity” with Italian.

Italian is the primary language in Sardinia today, although the rich Sardinian language, Sardo, is still widely spoken by 78% of the population. In the city of Alghero, Catalan is still widely spoken. It’s known as the last bastion of the Catalan language in Italy. The Spanish influence is all around the city, including the architecture and the flag.

Sardinia has been inhabited since the Paleolithic. The island’s most iconic civilization is the indigenous Nuragic one, which lasted from the 18th century BC to either 238 BC or the 2nd century AD in some areas and to the 6th century AD in the region known as Barbagia. After a period under a political and economic alliance between the Nuragic Sardinians and the Phoenicians, the island was partly conquered by Carthage and Rome, in the late 6th century BC and in 238 BC respectively; the Roman occupation lasted for 700 years, followed in the Early Middle Ages by the Vandals and the Byzantines. Since the island was finding itself disconnected from Byzantium’s scope of territorial influence, the Sardinians provided themselves with a self-ruling political organization, leading to the birth of the four Judicates. As the Italian maritime republics of Pisa and Genoa struggled to exercise increasing political interference upon the indigenous states, the Crown of Aragon subsumed the island as the Kingdom of Sardinia in 1324. The such Iberian Kingdom was to last until 1718 when it was ceded to the House of Savoy and later politically merged with the Savoyard domains based on the Italian Mainland. During the Italian unification, the Savoyards pursued a policy of expansion to the rest of the Italian peninsula, having their Kingdom be later renamed into the Kingdom of Italy in 1861, which became the present-day Italian Republic in 1946.

Sardinia is united geologically with Corsica, both being aligned along a mountain belt rising over 13,000 feet (3,950 meters) from the surrounding seafloor, with a continental slope deeply fretted by submarine canyons. The island is a remnant of a Hercynian block known as the Tyrrhenian continent; its rocks are mostly from the Paleozoic Era (about 541 to 252 million years ago). Cambrian Period (about 541 to 485.4 million years ago) slates predominate in the southwest, while Carbo-Permian granites constitute more than one-third of the total area of the island, chiefly in the eastern highlands of Gallura, Goceano, Nuoro, and Sarrabus.

The island’s relief is dominated by mountains of granite and schist. The highest point is Mount La Marmora (6,017 feet (1,834 meters)) in the Gennargentu massif. The climate is subtropical and Mediterranean. Precipitation ranges from 24 inches (600 mm) on the plains to 39 inches (990 mm) in the mountains. Sardinia’s rivers, of which the Tirso and Flumendosa are the most important, are short and full of rapids.

Sardinia has few major rivers, the largest being the Tirso, 151 km (94 mi) long, which flows into the Sea of Sardinia, the Coghinas (115 km) and the Flumendosa (127 km). There are 54 artificial lakes and dams that supply water and electricity. The main ones are Lake Omodeo and Lake Coghinas. The only natural freshwater lake is Lago di Baratz. A number of large, shallow, salt-water lagoons and pools are located along the 1,850 km (1,150 mi) coastline. 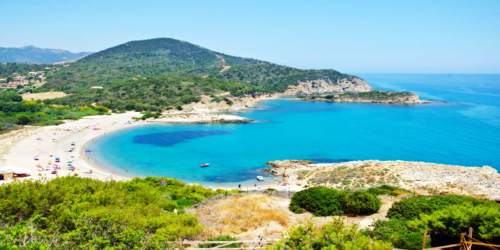 Much of the island’s arable land is devoted to cereal cultivation and fruit growing. Macchia grasslands mingled with a scrub of cistus, lentisk, myrtle, prickly pear, and dwarf oaks cover most of the uncultivated countryside. Rich salt-loving vegetation is found along the shores and cliffs, and salty marshes extend along the coast. Most of the mammals are like those found in Italy, but some of those deserving special mentions are a Sardinian weasel, a native wild cat, the mouflon (a wild sheep found only in Sardinia, Corsica, and Cyprus), and the Cape hare.

Sardinia’s capital and largest city ‘Cagliari’ is located in the south of Sardinia, a port town facing out towards the north of Africa. Cagliari is known as the city of lights and is home to one out of every seven Sardinians. Cagliari is known for its hilltop Castle, a walled medieval quarter, that stands high above the city. The city brings many tourists to the island. ‘Sassari’ and ‘Olbia’ are the next largest cities in Sardinia. They are both in the north of Sardinia.

The western coast has a higher distribution of rainfalls even for modest elevations (for instance Iglesias, elevation 200 m (656 ft), average annual precipitation 815 mm (32.1 in)). The driest part of the island is the coast of Cagliari gulf, with less than 450 mm (17.7 in) per year, the minimum is at Capo Carbonara at the extreme south-east of the island 381 mm (15.0 in), and the wettest is the top of the Gennargentu mountain with almost 1,500 mm (59.1 in) per year. The average for the entire island is about 800 mm (31.5 in) per year, which is more than enough for the needs of the population and vegetation. The Mistral from the northwest is the dominant wind on and off throughout the year, though it is most prevalent in winter and spring. It can blow quite strongly, but it is usually dry and cool.

Sardinia is even known as a Blue Zone, meaning that the people of Sardinia, on average, live longer than the rest of us. It’s believed the long life comes from a combination of lifestyle factors, such as the importance of family, inclusion, and reverence to the elderly, a healthy diet (locally sourced food), and a connection to nature.

According to the ISTAT census of 2001, the literacy rate in Sardinia among people below 64 years old is 99.5 percent. The total literacy rate (including people over 65) is 98.2 percent. The illiteracy rate among males below 65 years old is 0.24 percent and among women 0.25 percent; the number of women that annually graduate at secondary high schools and universities is about 10-20 percent higher than men. Sardinia has the 2nd highest rate of school drop-out in Italy. Sardinia has two public universities: the University of Sassari and the University of Cagliari, founded in the 16th and 17th century. 48,979 students were enrolled at universities in 2007-08.

Agriculture remains an important branch of the economy. Natural pastures cover more than half the area of Sardinia. Sheep and goats are widely raised. Wheat, barley, grapes, olives, cork, and tobacco are produced. Fishing for tuna, lobster, and sardines is important. Sardinia is rich in minerals, but the island’s traditional mining industry suffered in the 21st century. Processing industries include the smelting of lead and zinc and the production of aluminum and alumina. There are petroleum refineries and petrochemical complexes. Among other industries are food processing, textile and leather production, woodworking, and electrical engineering. Services and government administration became increasingly important economic sectors in the 21st century.

Over 600,000 hectares of Sardinian territory is environmentally preserved (about 25% of the island’s territory). The island has three national parks: Asinara National Park, Arcipelago di La Maddalena National Park, and Gennargentu National Park. There are 60 wildlife reserves, 5 W.W.F oases, 25 natural monuments, and one Geomineral Park, preserved by UNESCO. Northern Sardinian Coasts are included in the Pelagos Sanctuary for Mediterranean Marine Mammals, a Marine Protected Area, that covers a surface of about 84,000 km2 (32,433 sq mi), aimed at the protection of marine mammals.

Tourism is essentially concentrated on the coast, though the road network has been extended and much improved. The island is connected with continental Italy by both air and sea, but the relative isolation of the island has preserved many traditions.