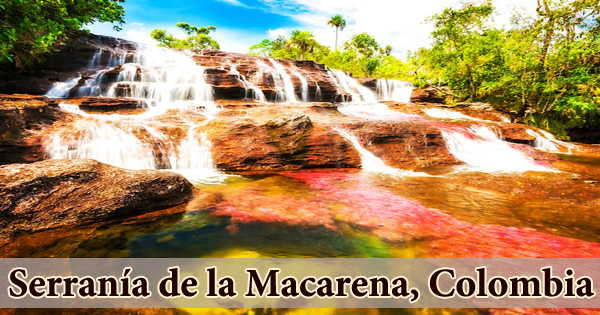 The Sierra de la Macarena, a remote geological oddity cloaked in a living evolutionary laboratory in Colombia, is one such location. It is, however, scarcely unknown outside of Colombia. It is an isolated mountain range in Colombia’s Meta Department. It was called after Macarena’s Virgin of Hope. A hidden location where enchantment still survives resides deep in the Sierra de la Macarena mountain range in the wilderness of Meta, Colombia.

Rare and abundant fauna inhabit in highly diversified environment that produces one of the world’s most fascinating natural wonders, the Cao Cristales liquid rainbow, for a few months of the year. The Macarena is where six primary biological and geological factors collide, each putting its own distinctive strain on the indigenous flora and wildlife. As a result, there is a high mutation rate. A biological hothouse has been described as the Sierra de la Macarena. And there’s a fire in this biological hothouse. At their northernmost point, the mountains are separated from the East Andes by roughly 40 kilometers (25 miles).

The range stretches 120 kilometers (75 miles) from north to south and is 30 kilometers (19 miles) broad. The tallest mountain, known as “El Gobernador,” stands at 2,615 meters (8,579 feet) and is the highest point in the Orinoqua Region. The Sierra de la Macarena is on the verge of being destroyed by fire. This unique planet, with its vast biodiversity waiting to be discovered, is on the verge of being lost forever. Cao Cristales is a rapid-flowing river with several waterfalls and rapids. Many areas of the riverbed feature small circular holes known as giant’s kettles, which were created by pebbles or pieces of tougher rocks.

When one of these tougher rock fragments falls into one of the cavities, it is twisted by the water circulation and begins to cut away at the hollow wall, expanding the pit’s size. According to a Congressional Law passed in 1948, the first national reserve in Colombia was formed in the middle section of the mountain range. In 1971, the park was established as a National Natural Park, with a protected area of 6,200 km2 (2,400 sq mi).

The Serranía de la Macarena lies on the boundary of three huge ecosystems, each with rich flora and fauna diversity: the Andes, the Eastern Llanos, and the Amazon rainforest. The national park contains an ecologically unique meeting place for the Amazon, Orinoco, and Andes regions’ flora and wildlife. The region has a tropical environment, with temperatures ranging from 42 degrees Fahrenheit (5.5 degrees Celsius) to 88 degrees Fahrenheit (31 degrees Celsius). These factors contribute to the preservation of a high degree of biodiversity, including several indigenous and uncommon species.

The hydrophytic rainforest, which can be hot, warm, or chilly, is the Serranía de La Macarena’s representative biome. Around 420 bird species, 10 amphibian species, 43 reptile species, and eight primates live on the tableland. The Colombian national army tracked down the guerilla hideaway over the next few years and the conflicts that ensued transformed the entire area into a virtual war zone.

Tourist activity in the Serrana de la Macarena was completely forbidden for safety concerns in the late 1980s and stayed that way until 2002, but because air transport was not readily available in the region until 2009, it did not become a popular tourist destination until recently. Rainforest, dry forest, shrublands, and savanna are among the habitats found within the park. Around 50 orchid species have been detected in the highlands, while botanists researching the region have identified over 2,400 additional plant species. The Cao Cristales River is home to a diverse array of aquatic vegetation. Due to a lack of nutrients and tiny particles, the river’s water is crystal pure.

Anteaters, jaguars, cougars, deer, 8 species of primates, 500 species of birds, including the gray-legged tinamou, 1,200 kinds of insects, and 100 species of reptiles are among the fauna of the environment. According to a Congressional Law passed in 1948, the first national reserve in Colombia was formed in the middle section of the mountain range. In 1971, the park was established as a National Natural Park, with a protected area of 6,200 km2 (2,400 sq mi).

Only the Venezuelan highlands, Surinam to the north, the Guyanas to the east, and the Sierra de la Macarena to the west remain. The enormous grass plains of Venezuela and Colombia, known as the ‘Llanos,’ lie between the two. The Botanical Gardens of La Macarena and the private reserve La Madrevieja de El Carmen, both located just outside of the city of La Macarena, provide opportunities for environmental tourism by immersing tourists in restoration operations. The Sierra de la Macarena is one of the world’s most biologically varied regions, with the jungle, grasslands, river basins, the Andes, dry plains, and rain forests all bringing their own biological and physical effects to bear at one specific confluence point.

The Precambrian granite of the Guyana Shield in the Guaviare River basin and the San Jose del Guaviare region are among the basement rocks on the east side of the Macarenas. To truly appreciate all that the Serrana de la Macarena has to offer, it is advised that you spend two or three full days in this town. There are numerous hotels in Macarena’s close vicinity.