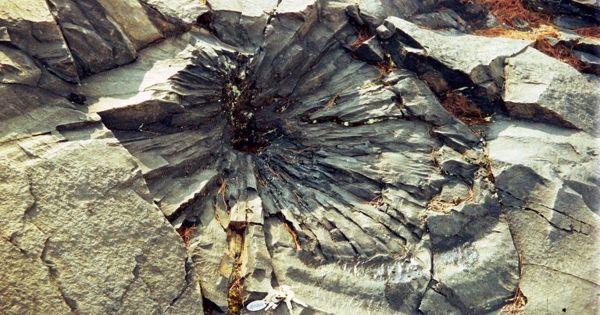 Shatter cones are distinctive cone or fan-shaped features in rocks, with radiating fracture lines that resemble a horsetail. These are rare geological features that are only known to form in the bedrock beneath meteorite impact craters or underground nuclear explosions. They are found in only two places on Earth, 1) in nuclear test sites and 2) meteorite impact structures. They are evidence that the rock has been subjected to a shock with pressures in the range of 2–30 GPa (290,000–4,350,000 psi). They are formed as a result of the high pressure, high-velocity shock wave produced by a large impacting object or a large explosion.

A shatter cone is a fluted conical structure produced in the rock by intense mechanical shock, such as that associated with meteoritic impact.

Shatter cones have a distinctively conical shape that radiates from the top (apex) of the cones repeating cone-on-cone in large and small scales in the same sample. The exact formation mechanism of shatter cones is still not well understood. Sometimes they have more of a spoon shape on the side of a larger cone. In finer-grained rocks such as limestone, they form an easily recognizable “horsetail” pattern with thin grooves (striae). The first man-made shatter cone was produced in 1959 during an underground nuclear explosion.

A shatter cone is a conical fragment of rock that has striations radiating from the apex and that is formed by high pressure (as from volcanism or meteorite impact). Coarser grained rocks tend to yield less well-developed shatter cones, which may be difficult to distinguish from other geological formations such as slickensides. Shatter cones can be found within the central uplifts of large impact structures and occasionally within the crater-fill deposits.

Shatter cones are best developed at relatively low shock pressures (5–10 GPa) and in fine-grained, structurally homogeneous rocks, such as carbonates, quartzites, and basalts. Geologists have various theories of what causes shatter cones to form, including compression by the wave as it passes through the rock or tension as the rocks rebound after the pressure subsides.

Shatter cones are the only shock indicators that can be seen with the naked eye. Shatter cones can range in size from microscopic to several meters. Others, such as planar deformation features (PDFs) can only be seen with the aid of a microscope. The largest known shatter cone in the world (more than 10 metres in length) is located at the Slate Islands in Terrace Bay, Ontario, Canada. It is a small, radially striated rock structure produced by intense shock, such as generated by meteorite impact.