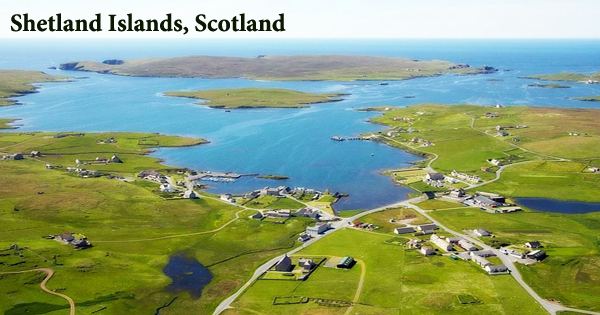 Shetland (Old Norse: Hjaltland; Scots: Shetland; Norn: Hjetland), also known as Zetland or Shetland, is a group of around 100 islands in Scotland, with less than 20 of them inhabited, situated 130 miles (210 kilometers) north of the Scottish mainland and at the northernmost point of the United Kingdom. The islands are located 80 kilometers (50 miles) northeast of Orkney, 170 kilometers (110 miles) west of Scotland, and 300 kilometers (190 miles) west of Norway. The Shetland Islands council area and the ancient county of Shetland are made up of them. Scalloway, a fishing port, is one of the settlements on Mainland, the largest island. Lerwick, which is also on the mainland, is the largest town and commercial and administrative center of the islands.

The local accent has a Scandinavian tinge to it, and streets called King Haakon or St Olaf serve as reminders that Shetland was ruled by the Norse until 1469, when it was given to Scotland as a dowry for a Danish princess. The islands are part of the Scottish Parliament’s Shetland constituency. The Shetland Islands Council, one of Scotland’s 32 council districts, is in charge of the local government. Lerwick, the islands’ administrative center and only burgh, has been the capital of Shetland since 1708, when Scalloway acted as the capital.

The islands of Whalsay and Bressay are located east of Mainland. The islands of Yell, Fetlar, and Unst, the most northerly island, are situated north of Mainland. Muckle Flugga, a lighthouse and group of rocks one mile off the coast of Unst, is the UK’s most northerly point. The largest island, referred to as “the Mainland,” covers 967 km2 (373 sq mi), making it the third-largest Scottish island and the fifth-largest in the British Isles. In Shetland, there are an additional 15 populated islands. The archipelago has an oceanic climate, complicated geology, a rugged coastline, and a lot of gentle, rolling hills.

The archipelago is known for its stunning beaches as well as the diverse bird and marine life that can be seen on a small ship cruise. Whales, dolphins, seals, and a variety of curious sea birds, including the adorable puffin, can be seen not only on the main island, but also on the remote islets that can be reached easily on a Shetland Islands cruise. Shetland has been inhabited since the Mesolithic period. Scandinavian influences, especially from Norway, dominated the islands in early medieval times. Later, the islands were eventually assimilated into Scotland.

The National Trust for Scotland owns Fair Isle, which is 24 miles (39 kilometers) south of Mainland and home to an important ornithological observatory. The scenery of the Shetland Islands is wild and majestic, with steep hills enclosing deeply indented coasts (sea lochs, or fjords, are locally known as voes). The islands’ economy has always relied heavily on fishing. The isles’ Norse and Scottish heritage is expressed in the local way of life, which includes the Up Helly Aa fire festivals and a strong musical tradition, especially the traditional fiddle style. Because of the warming influence of the North Atlantic Current, a branch of the Gulf Stream system, the climate is mild for such a high latitude just 400 miles (640 km) south of the Arctic Circle.

The islands also produced a number of prose and poetry authors, many of whom wrote in the Shetland dialect of the Scots language. Since the islands have been occupied by humans for about 6,000 years, many of these sites are ancient and well preserved as a result of the lack of development in this part of the world. Traditional buildings and farms still exist on the islands, preserving many of the ancient traditions. Several areas on the islands, including a number of important seabird nesting sites, have been set aside to protect the local fauna and flora. Two well-known Shetland animal breeds are the Shetland pony and the Shetland Sheepdog. Shetland sheep, cows, geese, and ducks are examples of animals with local breeds.

Crofting is the most common form of agriculture, with each croft having a few acres of arable land as well as the right to graze sheep on the “scattald,” or common grazings. The Old Norse words hjalt (‘hilt’) and land (‘land’) may have been used to create the name “Shetland.” Another explanation is that the first syllable comes from an ancient Celtic tribe’s name. The Shetland breed of sheep produces fine wool, which is spun and knitted into the distinctive Shetland and Fair Isle patterns by island staff. Since many crofts are unable to sustain a family, islanders look for jobs in the North Sea oil industry, overseas, or in the Royal Navy.

Hetlandensis, the Latinized adjectival form of the Old Norse name, is the oldest known variant of the modern name Shetland. It is mentioned in a letter written in 1190 by Harald, Count of Shetland. Fishing has always been important on the islands, and crofters fish to supplement their diet or supplement their income. Since the mid-twentieth century, the Lerwick herring fishery has declined, and fishing for other species has become more significant. Most of the islands have Norse names, but the roots of some of them are uncertain, and they may be pre-Norse, probably Pictish, or even pre-Celtic names or elements.

The long-running depopulation slowed only after oil was discovered in the North Sea northeast of Shetland. When a major oil terminal was constructed in the 1970s at Sullom Voe in the north of Mainland, it brought cutting-edge technology into Shetland’s traditional way of life. Shetland is located about 170 kilometers (106 miles) north of Scotland and 350 kilometers (217 miles) west of Bergen, Norway. It has a coastline of 2,702 km (1,679 mi) and occupies an area of 1,468 km2 (567 sq mi). Just 16 of the group’s approximately 100 islands are inhabited; the main island is known as Mainland. The wild birds and sheep that live here are well-known for outnumbering the human population. On a Shetland Islands cruise, keen birdwatchers can see Auks, Kittiwakes, and Great Skua swooping and diving along the island’s spectacular coastline.

The islands’ economy is based on fishing, with a total catch of 75,767 t (83,519 tons) estimated at over £73.2 million in 2009. Pipelines connect the North Sea fields to the depot, which is reached by tankers using Yell Sound’s sheltered deep water. The importance of Sumburgh Airport in the southern tip of the Mainland has grown as a result of the oil discoveries, and the Shetlands’ economy has benefited from supplying goods and services to the oil industry. Shetland’s oil sales have helped to support the Shetland Charitable Trust, which then helps to fund a number of local programs.

The islands were annexed to the Scottish crown in 1472, along with Orkney. Despite this, the islands have remained outside the mainstream of Scottish culture and tradition. Shetland sheep, renowned for their extremely fine wool, are the main subject of farming. Shetland Islands Council operates numerous inter-island services, with ferries serving the majority of the islands. Artifacts from the islands’ history can be found at the Shetland Museum and Archives in Lerwick, which opened in 2007.