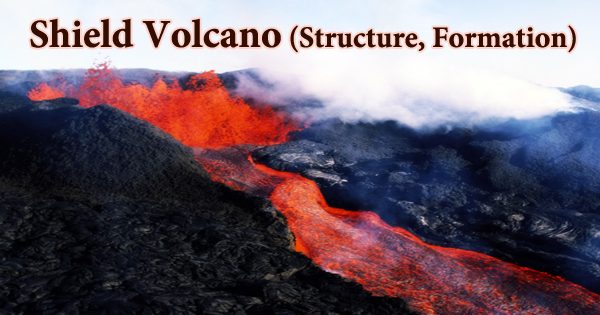 Shield volcanoes are the largest in terms of volume, and their diameter can range from tens to hundreds of kilometers. It is generated by the eruption of very fluid (low viscosity) lava, which travels longer and generates thinner flows than stratovolcano lava, which is more viscous. The shield volcano’s characteristic shape is formed by the slow deposition of large sheets of lava caused by several eruptions. The name “shield volcano” comes from the shape of the volcano. It has a larger surface area than the other two types of volcanoes, but it is more flatter.

From above, it resembles a warrior’s shield, with a slightly raised center and long, gently sloping sides. Because of the way lava flows down their flanks, both shield volcanoes and stratovolcanoes feature radial drainage patterns. Shield-building lava flows, on the other hand, create a rubbly base and blocky brecciated summits, and such interflow breccia zones serve as groundwater conduits. On constructive plate borders, where two plates are moving away from one another, shield volcanoes can be found.

They are, however, most common in ocean island volcanism linked to hot areas or continental rift volcanism. The largest volcanoes on the planet, such as Tamu Massif and Mauna Loa, are among them. The radial drainage pattern can be interrupted as the volcano is cut by sills and dykes that invade the rising edifice. These features deflect groundwater along interflow breccias and may lead to irregular drainage.

Some shield volcanoes are tall enough to produce year-round snow and even glaciers, which serve as a major source of groundwater replenishment. On large volcanic massifs, differences in climate, particularly precipitation, can lead to increased erosion on the windward, as opposed to the leeward, sides. Other planets in the Solar System include giant shield volcanoes, such as Mars’ Olympus Mons and Venus’ Sapas Mons. The word “shield volcano” comes from the German term Schildvulkan, which was coined in 1888 by Austrian geologist Eduard Suess and had been calqued into English by 1910.

A shield volcano’s lava is typically basaltic, meaning it has a low viscosity. The ability of a fluid to flow is measured by its viscosity. Consider the flow of molasses out of a jar and compare it to the flow of water. Water, in this case, has a low viscosity compared to molasses, which has a high viscosity. Shield volcanoes differ from the other three primary volcanic types, stratovolcanoes, lava domes, and cinder cones, due to their structural structure, which is a result of their magmatic composition.

Mauna Kea and Mauna Loa are shield volcanoes that rise nearly 9 kilometers above the sea bottom encircling the island of Hawaii. They are the world’s largest active volcanoes. The origins of shield volcanoes are comparable to those of enormous lava plateaus and flood basalts seen all over the planet. The lack of an obvious primary eruptive core distinguishes these eruptive structures from shield volcanoes, which form along linear fissure vents. In comparison to lava, ash, and rock erupting from other types of volcanoes, the basaltic lava of a shield volcano has a low viscosity. Because of its low viscosity, it can flow swiftly and cover a big area.

Each eruption’s lava hardens, and the lava from the following one flows over and hardens on top of the preceding one. Multiple eruptions build up over time, one on top of the other, to form a shield volcano. Active shield volcanoes have near-constant eruptive activity over exceptionally long periods of time, resulting in the progressive formation of edifices of enormous dimensions. Mature shields are the greatest volcanic landforms on Earth, excluding flood basalts.

Radial drainage patterns arise in normally sheltered volcanoes (as well as strato-volcanoes). The lava armors the surface as it flows over it, and the volcano forms a radial drainage system with uniform precipitation. Shield volcanoes have a mild (typically 2° to 3°) slope that steepens with elevation (to about 10°) before flattening near the peak, giving an overall upwardly convex shape. They are typically a tenth of their width in height. The shield-building flows, on the other hand, generate a rubbly base and blocky, brecciated tops, and these interflow breccia zones serve as ground water conduits.

Shield volcano eruptions are only explosive if water gets into the vent; otherwise, they are characterized by low-explosivity fountaining that generates cinder cones and spatter cones at the vent; however, lava rather than pyroclastic material makes up 90% of the volcano. Shield volcanoes can grow to be as huge as they are because they erupt on a regular basis for lengthy periods of time. Shield volcanoes, unlike cinder cones, which can erupt abruptly and unexpectedly and then go silent for hundreds or thousands of years, release a near-constant and steady flow of lava. As a result, layer upon layer of protection is gradually built up to form a massive shield.

At low latitudes, some shield volcanoes are high enough to support perennial snow and even glaciers. Snow and ice can serve as a groundwater recharge source as well as a surface water supply in some instances. The lava is hot and hasn’t changed much since it was formed, therefore these volcanoes are the result of high magma supply rates. Hotspot volcanism produces shield volcanoes, although they can also be found along subduction-related volcanic arcs or on their own.

A lava tube is another feature that permits shields to grow so huge. Lava cools as it travels away from the eruption site. The lava that is exposed to the air cools and hardens faster than the lava that is not. The generally low, broad profile of a mature shield volcano is progressively constructed by low volumes of such lavas deposited over extended periods of time. That outer lava can harden into a shell that protects the deeper lava depending on the conditions.