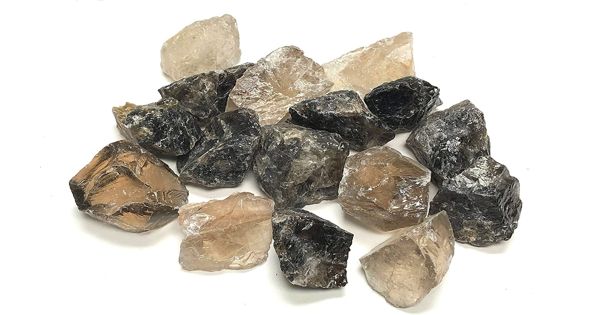 Smoky quartz is a gray, translucent version of quartz. The Smoky Quartz crystal is a grounding stone known for its ability to help you move on from difficult or painful experiences. It is a form of Quartz, one of the most common and popular crystals in nature. Some types of Smoky Quartz are very clear, while others are almost opaque, and some pieces are nearly black. It is found in Australia, Brazil, Madagascar, Scotland, the United States, and many other places.

Smoky quartz is a color-variety of crystalline quartz. It is a relatively inexpensive gem material because it is abundant, found in many locations, and its brown color is not currently in high demand.

It ranges in clarity from almost complete transparency to a brownish-gray crystal that is almost opaque. Some can also be black. Because of its darker color, the Smoky Quartz crystal healing properties are well-suited to removing negative energy or unwanted energy. It is a crystal representing our connection to Mother Earth, the chthonic energies lying in the lower worlds, and the transmutation of negative energies back into positive ones. The stone cleanses and purifies your energy field and allows you to hand over the energies you want to release to your crystal – whether it’s stress, anxiety, fear, sadness, or other negative vibrations.

While traditional Quartz has a clear or whitish cloudy color, Smoky Quartz has a grey color. The translucency results from natural irradiation acting on minute traces of aluminum in the crystal structure. The supportive quality of this stone is what makes it such a great energy stabilizer, as well. It was used for similar purposes by placing it outside of houses or in windows to prevent drifting spirits from entering a family’s space.

Smoky Quartz is the national gem of Scotland. In Celtic cultures, Smoky Quartz was sacred to the Druids. While the name Smoky Quartz is the most popular for this dark, brownish-black variety of Quartz, in Scotland and other European countries, it goes by Morion, the original term which the druids gave to this beautiful crystal. This stone represented the dark power of the Earth gods and goddesses. It was also associated with the ancient Greek goddess, Hecate, the goddess of magic. It’s important to remember that ancient views of darkness often encompassed a much more holistic approach to the concepts of light and dark and were not dualistic or connoting evil.

Smoky Quartz regained popularity during the Victorian era in Britain. It was often worn in mourning jewelry in the 19th century. Mourning jewelry were decorative pieces worn by those who had suffered a loss. Finally, it represents the power of the sacred, divine feminine – particularly in her most natural form.