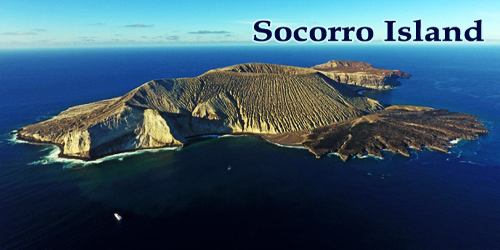 Socorro Island (Spanish: Isla Socorro) is a group of four volcanic islands situated in the Pacific Ocean about 400 km (250mi) off the coast of the southern tip of Baja California, a south-western state of Mexico, or officially known as the Revillagigedo Archipelago. The size is 16.5 by 11.5 km (10.25 by 7.15 miles), with a region of 132 km2 (51 sq mi). A Mexican possession lying some 335 nautical miles almost west and a small amount north of Banderas Bay & Puerto Vallarta. The island GPS coordinates are 18°48’N, 110°59’W. 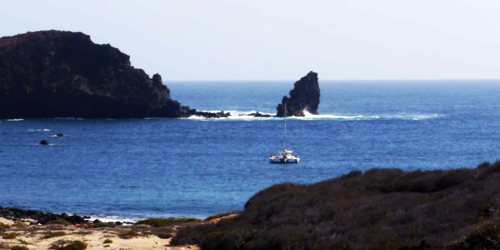 For many large species of pelagic species, such as many species of sharks, including hammerheads, silky, silvertip and white tips, humpback whales, dolphins, Socorro Island is a paradise, and they are also particularly known for the many large Manta Rays that inhabit this area. The island rises abruptly from the ocean to 1050 meters (3,445 ft) in elevation at its summit. Isla Socorro could be a shield volcano which last erupted in late January-early February 1993. The island is part of the northern Mathematicians Ridge, a mid-ocean ridge that, as activity shifted to the East Pacific Rise, became mostly inactive 3.5 million years ago. All four islands are post-abandonment alkaline volcanoes along with the several seamounts on the ridge. Socorro Island is the only dominant silicon peralkaline volcanic island in the Pacific Ocean, which is rare.

The Revillagigedos archipelago is probably best renowned for the massive population of the Pacific Giant Manta Ray’s. The island’s surface is broken by furrows, small craters, and diverse ravines, and covered in lava domes, lava flows, and cinder cones. These islands can only be accessed via liveaboard, and since the islands are all mostly uninhabited, with these incredible dive cruises, this is the perfect way to get away from busy cities and get a nice quality experience with some of the best the oceans have to offer. There is a naval station, founded in 1957, with a population of 250 (personnel and families), located in a village with a church, on the western side of Bahia Vargas Lozano, a small cove with a rocky beach, about 800 meters east of Cabo Regla, the southernmost point of the island. 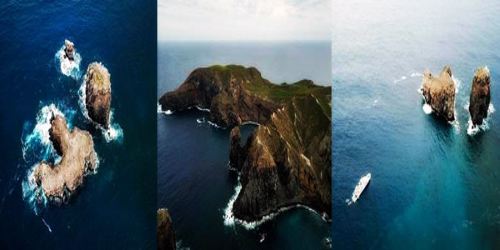 The water visibility here ranges from 15-50 m (49-164 ft) and the temperature of the water ranges from 21 degrees Celsius (70 degrees Fahrenheit) to 28 degrees Celsius (82 degrees Fahrenheit). There is a water spring about 5 km northwest of Cabo Regla, at the shoreline of Ensenada Grayson (or Caleta Grayson), an inlet. This is often brackish and sometimes covered by the ocean at the tide. They are part of a protected biosphere reserve and several conservation groups are working to conserve the rare wildlife that inhabits and passes here around here. The diving region of Socorro is not a coral reef, so don’t expect bright colors anywhere.

Prior to its discovery by Spanish explorers, there was no proof of human habitation on Socorro. Socorro is a more experienced diving area, as there are often strong currents and large waves, and most dive spots are very deep, but each ship has its own minimum level of diving experience. At the start of the 20th century, Barton Warren Evermann, director of the California Academy of Sciences in urban center promoted the scientific exploration of the island. 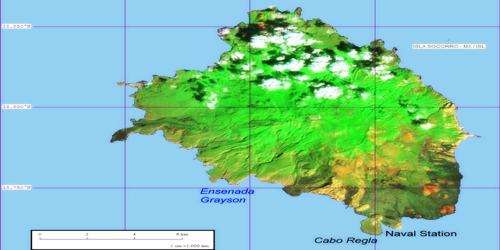 If we look at a map of Isla Socorro, the most recent being drawn in the 1800s, and see the rocks of Oneil, then go a little south, then east to the northwest point of the island, what the topography of the map tells us is that there is actually no Blue Lagoon of Socorro. The human activity introduced the island to cattle, cats, and rodents; more recently, the Schistocerca piceifrons locust has also established itself on the island. The western beach and then the Grand Arch lie to the east of the lagoon. Directly between the Blow Hole and the Grand Arch is the real opening to the lagoon. The lagoon itself is a rocky reef, and the eastern beach provides decent snorkeling. Socorro is a very important breeding location for several seabirds, many of which have here one in every of their north(east)ernmost breeding colonies. The current status of those birds isn’t well-known, and that they presumably have suffered from cat predation.