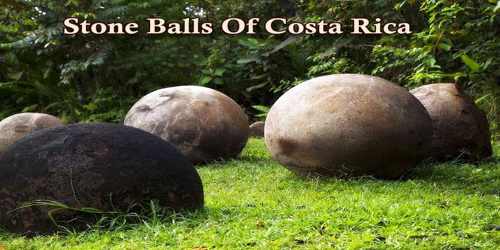 Stone Balls (or the stone spheres) of Costa Rica are an assortment of over three hundred petrospheres in Costa Rica, located on the Diquís Delta and on Isla del Caño. Locally, they are known as Las Bolas (literally The Balls). They are thought to have been built in lines leading to the house of chiefs, but their certain purpose remains unclear. The sphere stones are part of the Precolumbian Chiefdom Settlements of the Diquis that were added to the UNESCO’S World Heritage List, in June 2014. And in July 2014, a project proposed in 2011 to declared the spheres as a national symbol of the country was approved.

In the 1930s, workers from the United Fruit Company, clearing land in the Diquís Valley of Costa Rica, began unearthing large numbers of almost perfectly round stone spheres. The largest of these apparently man-made balls is over two meters in diameter and weighs over 16 tons. No one is sure exactly when or how they were made, or for what reason, but, according to University of Kansas archeologist John Hoopes, “The balls were most likely made by reducing round boulders to a spherical shape through a combination of controlled fracture, pecking, and grinding.” The Palmar Sur Archeological Excavations are a series of excavations of a site located in the southern portion of Costa Rica, known as the Diquís Delta. The excavations have centered on a site known as “Farm 6”. They were likely the product of an extinct civilization of people that existed in the area between 700 CE and 1530 CE. 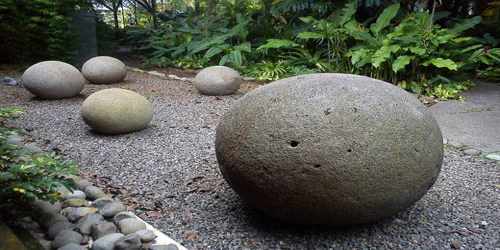 The spheres range in size from a few centimeters to over 2 meters (6.6 ft) in diameter and weigh up to 15 tons. Most are sculpted from gabbro, the coarse-grained equivalent of basalt. There are a dozen or so made from shell-rich limestone, and another dozen made from sandstone. They appear to have been made by hammering natural boulders with other rocks, then polishing with sand. The degree of finishing and precision of working varies considerably. The stones appear to be extremely smooth and almost perfectly round and are likely to have been hand-made by the ancient people of the Diquis Valley. The gabbro came from sites in the hills, several kilometers away from where the finished spheres are found, though some unfinished spheres remain in the hills. They are used for decoration.

The Site is located in Palmar Sur, southern Costa Rica. The site is located on approximately 10 hectares of property that was previously owned by the United Fruit Company in the alluvial plain of the Térraba River.

The exact origin and purpose of the stones is debated by archaeologists. Some excavation around the stones still in their original position has revealed pre-Columbian pottery, linking their existence to ancient pre-conquest cultures, but so many have been moved from their original sites that analysis of their origin and pin-pointing their date of creation has become difficult. Some of the stones were discovered in seemingly astronomically significant alignments, leading some archaeologists to propose that they may have been used for astronomy or navigation.

The stones are made of hard igneous (solidified from lava or magma) rock such as granodiorite and were shaped by humans rather than nature. Unfortunately, many of the balls have been damaged or moved by trophy hunters and so today very few remain in their original position two have even been transported to the U.S., one at museum of the National Geographic Society in Washington, D.C. and the other at a courtyard near Harvard’s Peabody Museum of Archaeology and Ethnography in Cambridge, Massachusetts.