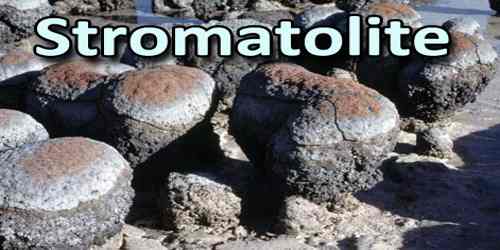 Stromatolite is a dome-shaped structure consisting of alternating layers of carbonate or silicate sediment and fossilized algal mats. Stromatolites are one of the oldest fossils known, some dating to over 3.5 billion years old. Stromatolites are produced over geologic time by the trapping, binding, or precipitating of sediment by groups of microorganisms, primarily cyanobacteria. Cyanobacteria are prokaryotic cells, which is the simplest form of modern carbon-based life in that they lack a DNA-packaging nucleus.  Bacteria, including the photosynthetic cyanobacteria, were the only form of life on Earth for the first 2 billion years that life existed on Earth. Stromatolites are actually structures formed by huge colonies of blue green algae (or cyanobacteria). Some scientists consider these bacteria to be the earliest life form on Earth. These structures are usually characterized by thin, alternating light and dark layers that may be flat, hummocky, or dome-shaped. The cyanobacteria which dominate stromatolites process many of the building blocks of life, including oxygen, carbon, and nitrogen.

Although stromatolites continue to form in certain areas of the world today, they grow in greatest abundance in Shark Bay in Western Australia. A matlike layer of blue-green algae is able to grow on the surface of sediments in the shallow waters there because evaporation causes high concentrations of salt that discourage snails and other organisms from eating the blue-green algae.

Occurrences and Fossil records of Stromatolite

The occurrence of stromatolites in calcarenites clearly suggests a marine origin. The presence of pellets and clastic sediments in the matrix of columnar stromatolites, and their restricted nature of occurrence indicate that they were formed in microprotected basins within a macro-tide dominated, highly turbulent marine environment, presumably under inter-tidal flat conditions. The presence of fenestrae indicates the generation of gas bubbles during photosynthesis or bacterial decomposition at the time of stromatolitic growth. The brownish to pink colour of the algal laminae may be attributed to algal pigmentation. Modern stromatolites are mostly found in hypersaline lakes and marine lagoons where extreme conditions due to high saline levels prevent animal grazing. One such location is Hamelin Pool Marine Nature Reserve, Shark Bay in Western Australia where excellent specimens are observed today, Pampa del Tamarugal National Reserve in Chile and another is Lagoa Salgada (“Salty Lake”), in the state of Rio Grande do Norte, Brazil, where modern stromatolites can be observed as bioherm (domal type) and beds. Inland stromatolites can also be found in saline waters in Cuatro Ciénegas, a unique ecosystem in the Mexican desert, and in Lake Alchichica, a maar lake in Mexico’s Oriental Basin. The only open marine environment where modern stromatolites are known to prosper is the Exuma Cays in the Bahamas. In 2010, a fifth type of Chlorophyll, namely Chlorophyll f was discovered by Dr. Min Chen from stromatolites in Shark Bay.

Fossilization is actually a rare occurrence because organic materials tend to decompose and the process requires the relatively quick preservation of bodily remains. Normally, the remains need to be covered by sediment or trapped in resin as soon as possible. Stromatolites are a major constituent of the fossil record of the first forms of life on earth. The earliest fossils date to 3.7 billion years ago. They peaked about 1.25 billion years ago and subsequently declined in abundance and diversity, so that by the start of the Cambrian they had fallen to 20% of their peak. The most widely supported explanation is that stromatolite builders fell victim to grazing creatures; this theory implies that sufficiently complex organisms were common over 1 billion years ago. History and Uses of Stromatolite

Stromatolites provide some of the most ancient records of life on Earth by fossil remains which date back more than 3.5 billion years. A Stromatolite is a microbially mediated rock – so it is both biological and geological.

Fossils (from Latin fossus, literally”having been dug up”) are the mineralized or otherwise preserved remains or traces of animals, plants, and other organisms. In ancient times they were believed to be a gift from the stars and were revered by many cultures. Because of their age they have been used throughout the centuries as a talisman for protection and long life.