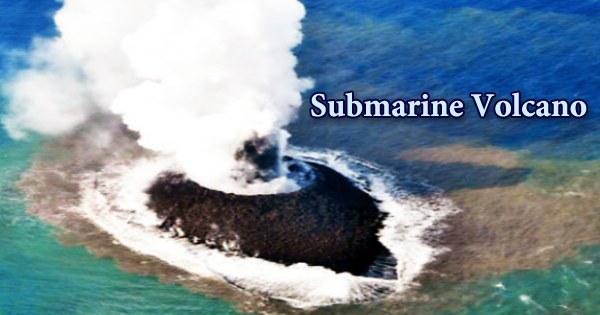 Under an average of 8,500 feet (2,600 meters) of water, the most productive volcanic systems on Earth are hidden. Underwater vents or fissures in the Earth’s surface from which lava can erupt are known as submarine volcanoes. Many undersea volcanoes are found around mid-ocean ridges, which are sites of tectonic plate development. A global system of mid-ocean ridges produces an estimated 75% of the annual output of magma beneath the oceans. Only 119 submarine volcanoes have been documented as active throughout the Holocene Epoch, however, there could be over one million geologically young submarine volcanoes on the ocean floor.

A total of 0.7 cubic miles (3 cubic kilometers) of lava is estimated to have erupted. Magma and lava form the boundaries of new oceanic plates and provide heat and chemicals to some of the most bizarre and exotic organisms on the planet. Although the majority of submarine volcanoes are found deep inside seas and oceans, some do occur in shallow water and can spew material into the atmosphere during an eruption. Active volcanoes generate seismic and acoustic signals that are crucial for understanding volcanic physics as well as providing eruption forecasts and early warnings.

One of the world’s greatest volcanoes, Havre, is located 3,000 feet (900 meters) beneath the sea surface in the midst of the Pacific Ocean. Over one million undersea volcanoes are thought to exist (most are already extinct), with 75,000 rising more than one kilometer above the seafloor. More than 70% of all volcanic eruptions take place underwater, and scientists are baffled when it comes to understanding them because the eruptions are hidden beneath thousands of feet of water.

There are more than a million undersea (underwater) volcanoes if an estimate of 4,000 volcanoes per million square kilometers on the Pacific Ocean’s floor is generalized to all oceans. In comparison to those on land, the presence of water can significantly affect the features of a volcanic eruption and the explosions of underwater volcanoes. Water, for example, allows lava to cool and solidify more faster than it would in a terrestrial eruption, resulting in volcanic glass.

Volcanoes are frequent near the tectonic plate borders of the Earth. These limits allow magma, a super-heated molten rock, as well as ash and gases, to ascend through the Earth’s crust and emerge on the surface, often spectacularly. Due to the fact that many plate borders are submerged, approximately three-quarters of all volcanic activity on Earth occurs underwater. Lava erupted by undersea volcanoes has different shapes and textures than lava erupted on land. When lava comes into touch with water, a solid crust forms around it. Pillow lava is formed when advancing lava flows into this crust.

Submarine volcanoes, also known as seamounts (underwater mountains), can be just as powerful and, in some situations, larger than land-based volcanoes. According to some estimates, there could be one million volcanoes on the Pacific Ocean floor alone, almost 750 times the number on dry land. Magma (molten rock beneath the Earth’s surface) rises from the depths of the Earth to the surface of the land or the seafloor in any volcanic eruption. The Havre volcano, which is 3,000 to 4,000 feet below sea level and has a pressure of 92 to 122 times that of sea level, is thought to have reduced its explosiveness and sculpted the many types of lava flows.

It can no longer boil beyond 2200 m in the ocean, where the pressure exceeds the critical pressure of water (22.06 MPa or around 218 atmospheres for pure water). It becomes a supercritical fluid. Deep-sea volcanoes can be difficult to detect with hydrophones at large distances if they don’t emit boiling sounds. Despite the fact that most submarine volcanoes do not produce the same spectacular eruptions as their terrestrial counterparts, undersea volcanic activity is an ongoing process that affects the ocean’s features.

Not only does pressure affect how lava forms, but it also affects how water interacts with cooling magma, which is very different from how magma interacts with air. When water comes into contact with molten lava at 800 degrees Celsius, it vaporizes instantly. When magma hits the seafloor, it comes into contact with cold ocean water and swiftly cools, forming basaltic rock, often known as “pillow lava” because of its spherical appearance. The great majority of oceanic crust is made up of pillow lava and slower-cooling magma beneath it.

Many submarine volcanoes are seamounts, which are usually extinct volcanoes that rise suddenly from the seafloor at a depth of 1,000 to 4,000 meters. Oceanographers define them as autonomous features that rise at least 1,000 meters above the seafloor. Seamounts can be found all over the ocean, when magma rises to the surface and explodes. New sea-floor material is formed when lava or magma has erupted and hardened. The mid-ocean ridge volcanoes eject far more lava than the rest of the world’s volcanoes combined.

In a process known as seafloor spreading, frequent eruptions along divergent plate boundaries such as the Mid-Atlantic Ridge generate new ocean bottom. There are an estimated 30,000 seamounts on the planet, but only a few have been researched. Some seamounts, on the other hand, are peculiar. Volcanic activity occurs halfway around the world, along the Pacific Ring of Fire, as plates collide, forming subduction zones.

When magma comes into touch with water, however, the temperature difference is so great that the magma rapidly hardens, a process known as quenching. Submarine eruptions can be divided into two types: those caused by the slow release and bursting of enormous lava bubbles, and those caused by the rapid explosion of gas bubbles. Because lava has a distinct impact on marine organisms and ecosystems than gas, it’s critical to be able to tell the two apart. Volcanic activity in one region can lead to the formation of underwater mountains known as seamounts or even islands that break the surface of the ocean.

A volcanic island is a seamount that has grown large enough to breach the ocean’s surface. The Hawaiian Islands are an excellent illustration of this process; in fact, just south-east of Hawaii, a juvenile seamount known as Loihi has risen to 3300 feet (1000m) and is expected to reach the surface in around 50,000 years. In both types of eruptions, scientists have been able to link noises to sights. Seamounts are responsible for more than just the development of fresh oceanic crust. Hot springs known as ‘hydrothermal vents’ emerge when magma near the seafloor or erupting lava mixes with seawater.