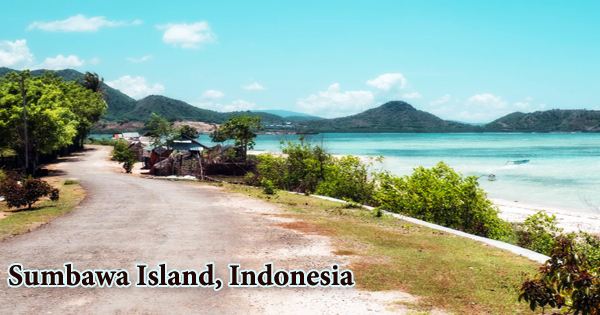 Sumbawa is all volcanic ridges, terraced rice fields, arid stretches, and sheltered bays, all intricately deformed and spilling into the sea. It’s an Indonesian island in the Lesser Sunda Islands series, sandwiched between Lombok to the west, Flores to the east, and Sumba to the southeast. The surf, sandy beaches, and rugged landscape of this island are its most well-known features. The bulk of visitors to Sumbawa come to surf and dive because of the great surf and magnificent coral reefs.

Traditionally, the island has been noted for its sappanwood, honey, and sandalwood. The extensive grasslands and savanna-like environment are ideal for breeding horses and cattle, as well as hunting deer. Sumbawa was historically divided into east and west, with the western Sumbawans influenced by the Balinese and Sasaks of Lombok, and the eastern Bimans sharing linguistic and cultural commonalities with the Makarese of Sulawesi and the Flores and Sumba peoples. However, because the entire island is Muslim, conservative attire is advised.

Despite its proximity to Bali and Lombok, it is a totally different kind of country, significantly less developed, usually very dry, much poorer, exceedingly conservative, and divided between two distinct peoples. Sumbawa covers 15,414.50 square kilometers or 5,951.57 square miles (three times the size of Lombok) and has a population of 1,561,461 people (according to the 2020 Census). It demarcates the divide between the islands to the west, which were influenced by Indian religion and culture, and the region to the east, which was less influenced.

The 14th-century Nagarakretagama described many Sumbawa monarchies, including Dompu, Bima, Sape, and one on the Sang Hyang Api island off the northeast coast of Sumbawa. The Dutch came in 1605, although Sumbawa was not properly ruled until the early twentieth century. Despite the fact that Sumbawa is largely Islamic, underground adat (traditional law and legend) still thrives in rural areas. The Sultanate of Bima, on the other hand, was a Malay-Islamic polity with relations to the Bugis and Makassar peoples of South Sulawesi, as well as other Malay-Islamic polities throughout the archipelago.

Sumbawa Besar, or just Sumbawa, is the island’s largest town, despite the fact that it sprawls without a true center. The main streets create a one-way loop in the nights, making for a perfect racetrack for ojek drivers, however the side lanes are peaceful and leafy. People on Sumbawa Island were known in the East Indies for their honey, horses, sappanwood, which is used to manufacture red dye, and sandalwood, which is used for incense and medicine, according to historical sources. Agriculturally, the area was supposed to be extremely productive.

At the most recent decennial census in 2020, the island’s population (including smaller outlying islands) was 1.56 million, accounting for 29.46% of the 5.32 million people in the Province of West Nusa Tenggara. Moyo Island, home to deer, buffalo, wild hogs, and a plethora of bird species, is the main attraction in the Sumbawa Besar area. The island is surrounded by coral and is located in a nature reserve, making it perfect for snorkeling. The island is surrounded on three sides by water: Alas Strait to the west, the Indian Ocean to the south, Saleh Bay to the north, and the Flores Sea to the north.

The Trans-Sumbawa Highway is ideal for getting between Lombok and Flores swiftly because it is mostly traffic-free and in excellent condition. Most overland passengers don’t even get off the bus in Sumbawa as they float and roll from Lombok to Flores because transportation connections off this trunk road are infrequent and inconvenient. Sumbawa’s most distinguishing features are Saleh Bay and the Sanggar Peninsula. Mount Tambora (8°14’41”S, 117°59’35”E), a massive stratovolcano famed for its VEI 7 eruption in 1815, one of only a few such eruptions in the last 2,000 years, is located on the latter. The eruption demolished the majority of Tambora’s summit, lowering its height by about a third and leaving a six-kilometer-wide caldera in its wake.

Bima is a modest port town that is quiet but welcoming. The town is centered on Jalan Flores, with most of the lodging located to the west of the Sultan’s Palace, whose museum exhibits a modest collection of traditional clothes. Traditional thatched houses can be seen in the Wawo area around Bima; examples may be found at Maria and Sambori, both on the Bima-Sape bus route. The huge western lobe of Sumbawa is dominated by a massive central highland, with lesser highlands at Tambora, Dompu, and Bima.

The nearby islands include Moyo Island, the volcanically active Sangeang Island, and the tourist-oriented Komodo Islands (administrated by Flores) to the east. Sumbawa has earned a reputation for having some of Indonesia’s best surfing sans the throngs that tourists and visitors will encounter in Bali. Air travel is the most convenient way to get to Sumbawa. The island’s major airport, Bima, is connected to Denpasar and Makassar via commercial airline service.