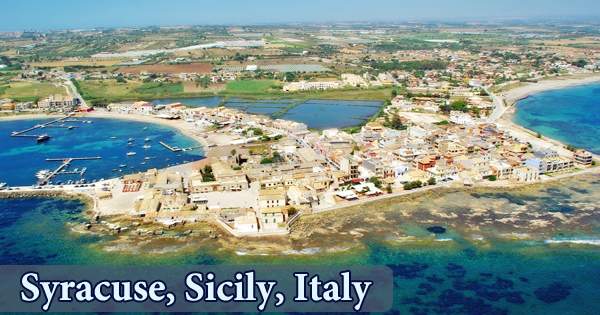 Syracuse (/ˈsɪrəkjuːs, -kjuːz/; Italian: Siracusa (siraˈkuːza)), is a city on the east coast of Sicily, Italy, 33 miles (53 kilometers) south of Catania. It was ancient Sicily’s most important Greek city. Syracuse was founded in 734 BC by Corinthians headed by the nobleman Archias, and the city quickly grew to dominate the coastal plain and the surrounding hill region. The city is known for its rich Greek and Roman history, culture, amphitheatres, and architecture, as well as for being the home of Archimedes, the preeminent mathematician, and engineer. This 2,700-year-old city was a prominent player in ancient times when it was one of the Mediterranean world’s main powers. Syracuse is situated in the southeast corner of the island of Sicily, beside the Ionian Sea and the Gulf of Syracuse.

It is located on a steep rise of land with depths of 2,000 meters (6,600 feet) close to the city offshore, despite the fact that the city itself is not particularly mountainous. Cafe tables flow into brilliant baroque piazzas, and honey-hued medieval side alleys lead down to the glittering blue sea. It’s hard to believe now, but this was once the biggest metropolis in the ancient world, much larger than Athens and Corinth. In recent times, UNESCO has designated the city, together with the Pantalica Necropolis, as a World Heritage Site.

The city’s initial Greek founders established an elite (gamoroi), while the Sicel natives (Siculi) labored as an oppressed class on the land. Hippocrates of Gela, a city to the west, conquered the Syracusans in the early fifth century BC. The settlements of Stentinello, Ognina, Plemmirio, Matrensa, Cozzo Pantano, and Thapsos, which already had a link with Mycenaean Greece, demonstrate that Syracuse and its surrounding territory had been inhabited from ancient times. A remarkable amount of well-preserved Greek (and Roman) remains may be seen at the archaeological site, which is located northwest of town.

The Greek theatre, which goes back to at least the 5th century BCE, is probably the greatest attraction. Its cavea is one of the largest ever constructed, with 59 rows that can hold up to 15,000 spectators. The theatre is still utilized for an annual Greek theatrical festival that takes place from mid-May to late June. The most renowned cave in Siracusa is the fabled Ear of Dionysius. It gets its name from the form of its ear, as well as its amazing acoustic characteristics, which magnify the noises within.

According to mythology, it was used as a jail by the dictator Dionysus, who eavesdropped on the captives’ talks. It’s an artificial cave built under the Greek Theatre of Siracusa in an ancient stone quarry known as Latomia del Paradiso. Syracuse was established in 734 or 733 BC by Greek settlers headed by the oecist (colonizer) Archias from Corinth and Tenea. The ruins of the then-new city now form the Parco Archeologico della Neapolis, one of Sicily’s most important archaeological sites, over three millennia later.

Syracuse retained its role as the capital of the Roman administration of Sicily and the seat of the praetor, despite a gradual decline over time. It remained an important port for trade between the Empire’s eastern and western regions. Located across the lake from the mainland, Ortygia is Syracuse’s most picturesque neighborhood, a highly atmospheric quarter with an ever-growing army of admirers enamored with its stunning streetscapes and appealing dining, drinking, and retail opportunities. Two devastating earthquakes hit the city in 1542 and 1693, as well as a plague in 1729. Today, Syracuse boasts a population of around 125,000 people and a plethora of historical attractions for visitors.

The renowned Ear of Dionysius, a 20m-high, narrow pointed arch carved into the rock face that grows inwards for about 65m, is of particular importance. Caravaggio gave it that name during his visit in 1608, and tradition has it that Dionysius the Tyrant used it as a jail for his most vehement foes. He could hear their discussions from outside due to the amazing cathedral-like acoustics. The Cathedral is a unique example of hybrid architecture, as it is both a pagan temple and a Christian church. It was erected over the ruins of an Athena temple that was built around 480 BC. It also hides a historical gem beneath its baroque façade, with Doric columns visible both outside and within.

The Archaeological Museum is a short distance from the archaeological park (in Via Teocrito) and houses a fantastic collection of exhibits from all around Syracuse. The Museo Archeologico Regionale Paolo Orsi is one of Europe’s most famous and important archaeological museums. Pieces from prehistory to the Greek-Roman period are on exhibit, and they came from excavations in the city and other parts of Sicily. UNESCO has designated the entire city of Syracuse, as well as the Necropolis of Pantalica, which is located within the province of Syracuse, as a World Heritage Site since 2005.

The Santuario della Madonna delle Lacrime is a lovely spot, and the spectacular edifice was erected to commemorate a miracle that occurred in 1953: the lacrimation of a plaster image of the Virgin Mary. The Arethusa Fountain is the historical centerpiece of the western side. According to legend, Arethusa, an Arcadian nymph, fled underwater to Syracuse in an attempt to flee the river God Alpheios’ persistent amorous advances. Maniace Castle is named after Giorgio Maniace, a Byzantine commander. It’s a genuine emblem of Emperor Federico II’s strength and brilliance, as it was erected on top of an old fort between 1232 and 1240. The most extreme flap of Ortigia Island is immersed in the hues of the sea.

Eurialo Castle is one of the most extensive and well-preserved military structures of the Greek era. Dionysus I, the tyrant of Syracuse, constructed it to complete the vast defensive structure known as the Dionysian walls, which extended along the edge of the Epipoli plateau. The clatter of the soldiers’ sandals can still be heard as you walk through the remains, which transports visitors back in time. The Fontana Diana, which relates the tale of Alpheus and Arethusa, is located in Piazza Archimede, which is dedicated to the great mathematician and scientist who was born in Siracusa. It was built in the 9th century and is surrounded by structures that depict Sicily’s history from the Middle Ages to the present. Syracuse’s monuments and archeological sites are the best examples of outstanding architectural creation spanning several cultural aspects, including Greek, Roman, and Baroque, and Ancient Syracuse was “directly linked to events, ideas, and literary works of outstanding universal significance,” according to the city’s website.