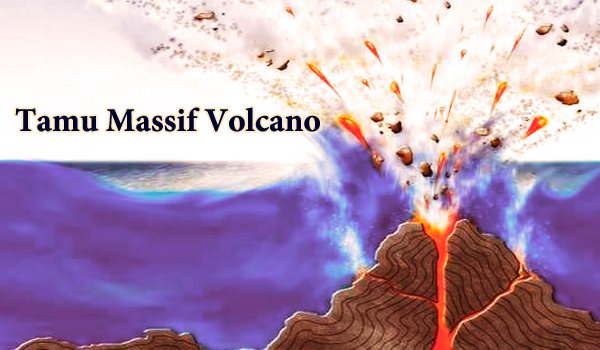 The majority of the world’s greatest features are so easily visible that they have been known and recognized for centuries; Tamu Massif is a submerged shield volcano in the northwest Pacific Ocean that looks like a cross between a mid-ocean ridge and a shield volcano. It has the largest footprint of any volcano, covering 120,000 square miles (310,800 square kilometers), roughly the size of New Mexico. It’s also bigger than any other single volcano on the planet.

In 2013, a group of experts shocked geology enthusiasts by claiming that Mauna Loa, a 2,000-square-mile shield volcano in Hawaii, was not the world’s largest volcano. Tamu Massif, an extinct volcanic mountain on the seafloor east of Japan that seemed to be a single shield volcano measuring 100,000 square miles, nearly the same size as the state of Arizona, was given that honor, according named the researchers. The volcano is around 553,000 square kilometers in size (214,000 sq mi).

Its summit is roughly 1,980 meters (6,500 feet) below the ocean’s surface, and its base is around 6.4 kilometers (4.0 miles) deep. The volcano stands at a height of 4,460 meters (14,620 feet). For the past 140 million years, the megavolcano has been dormant. However, the fact that it exists will aid geophysicists in determining the maximum amount of magma that can be kept in the Earth’s crust and poured out onto the surface. It also demonstrates that Earth can build volcanoes comparable to Mars’ Olympus Mons, which, at 625 kilometers in diameter, was formerly the largest volcano known in the Solar System.

Tamu Massif is roughly 1000 miles (1609 kilometers) east of Japan, in a desolate area of the northwest Pacific Ocean. It has a top that is more than 6500 feet (2000 meters) below sea level. It was created during a single geologically brief eruptive phase, which scientists previously believed was inconceivable on Earth. If confirmed, the Tamu Massif would become the world’s largest known volcano, dwarfing the current record-holder, Phhonu in the Hawaiian Islands.

Most volcanoes have distinct “mountains,” but the Tamu Massif has gentle slopes. Tamu Massif has long been known as one of three big mountains that make up the Shatsky Rise, an undersea range. The rise originated near a juncture where three plates of Earth’s crust formerly ripped apart, some 1,500 kilometers east of Japan. Tamu’s spherical dome covers an area of more than 292,500 km2 (112,900 sq mi), which is many times greater than Mauna Loa’s 5,000 km2 (1,900 sq mi) and roughly half the size of the Martian volcano Olympus Mons.

A new study published in Nature Geoscience re-examined Tamu Massif and came to a surprising conclusion: it’s not a shield volcano at all, meaning Mauna Loa reclaims the title. In an interesting twist, the lead author on both papers is William Sager, a marine geophysicist at the University of Houston. Tamu’s whole mass is made up of basalt. It has relatively gentle slopes that range from less than half a degree to one degree towards the summit. The Shatsky Rise oceanic plateau is the size of California or Japan, but Tamu Massif, the plateau’s oldest and greatest edifice, is the size of New Mexico or the United Kingdom and Ireland combined.

The slope is less than half a degree near the volcano’s base. It is not a volcano that rises abruptly and sharply from the seabed. Sager and the International Ocean Discovery Program drilled into the massif in 2009 and discovered hardened lava flows up to 75 feet thick, indicating that it was created by massive eruptions. According to a study published in 2016, Tamu Massif likely encompassed the entire Shatsky Rise, giving it a surface area of 533,000 square kilometers (206,000 square miles), comparable to New Mexico or Japan, and surpassing Olympus Mons in surface area, though it has yet to be determined which of the two volcanoes has the greater mass.

Tamu Massif was not discovered until seismic data revealed that its many lava flows erupted from a single vent, and chemistry studies proved that the lava flows were comparable in composition and age. Tamu had previously been proven to be made of lava by shallow rock cores. However, geologists believe that the mountain, which rises 4 kilometers above sea level, was formed by numerous volcanoes erupting at the same time and their lava combining into one pile.

Researchers detected three bathymetric highs and a low ridge using magnetic lineations, a topography that would suggest three independent volcanoes, but the plume-head model reveals a single huge volcano. Tamu Massif isn’t actually a shield volcano; instead, it looks to be a massive accumulation of 19-mile-thick oceanic crust, four times the global average thickness. It’s unclear how this is feasible, but it does suggest that the rate of crust production in this area was off the charts, for reasons that are currently unknown.

The world’s largest active shield volcano, Mauna Loa in Hawaii, is just 15% the size of Tamu, but it is taller, rising 9 kilometers from the sea floor to the peak. Based on multichannel seismic profiles and rock samples collected at core sites of the Integrated Ocean Drilling Program (IODP). Tamu Massif looks to be a single gigantic volcano built by lava flows that erupted from the volcano’s center and formed the shield shape; nevertheless, the profiles have large gaps in them, suggesting that it could be the activity of multiple volcanoes.