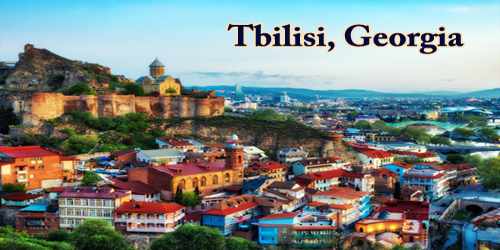 Tbilisi (English: /təbɪˈliːsi, təˈbɪlɪsi/ tə-bih-LEE-see, tə-BIL-ih-see; Georgian: თბილისი (tʰbilisi)), formerly Tiflis (/ˈtɪflɪs/ TIF-lis), capital of the Republic of Georgia, on the Mtkvari (Kura) River at its dissection of the Trialeti (Trialetsky) and Kartli (Kartliysky, or Kartalinian) ranges. Tbilisi was founded in the 5th century AD by Vakhtang I of Iberia, and since then has served as the capital of various Georgian kingdoms and republics. Between 1801 and 1917, then part of the Russian Empire, Tbilisi was the seat of the Imperial Viceroy, governing both Southern and Northern Caucasus.

With its dramatic valley setting, picturesque Old Town, eclectic architecture, and superb eating and drinking opportunities, Tbilisi is the vibrant, beating heart of Georgia and home to more than one in three of its citizens. Add to that the pull of the city’s hipster culture, its techno scene, and a general air of cool, and Tbilisi is confidently sealing its reputation as the South Caucasus’ most cosmopolitan city. 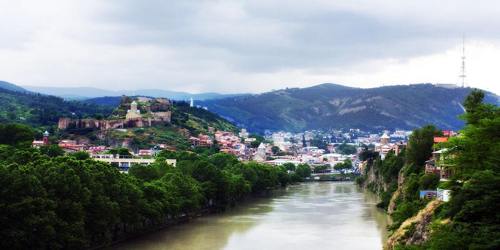 Historically, Tbilisi has been home to people of multiple cultural, ethnic, and religious backgrounds, though it is currently overwhelmingly Eastern Orthodox Christian. Its notable tourist destinations include cathedrals Sameba and Sioni, Freedom Square, Rustaveli Avenue and Agmashenebeli Avenue, medieval Narikala Fortress, the pseudo-Moorish Opera Theater, and the Georgian National Museum. The climate in Tbilisi mostly ranges from 20 to 32 °C (68 to 90 °F) in the summer and 7 to −1 °C (45 to 30 °F) in the winter.

Founded in 458 (in some sources, 455), when the capital of the Georgian kingdom was transferred there from Mtskheta, the city had a strategic position, controlling the route between western and eastern Transcaucasia. It was often captured and sacked and knew many masters: the Persians in the 6th century, the Byzantine Empire and the Arabs in the 7th. In 1122 David IV (the Builder) of Georgia captured Tbilisi and restored it as a capital, but in 1234 it fell to the Mongols, and in 1386 it was sacked by Timur. The Turks captured the city on several occasions, and in 1795 it was burned to the ground by the Persians. In 1801 Tbilisi was captured by the Russians, who improved its communications by building the Georgian Military Highway across the Greater Caucasus from Vladikavkaz to Tbilisi. In 1872 it was linked by rail to Poti on the Black Sea and in 1883 to Baku on the Caspian Sea. In 1921 it was made the capital of the Georgian republic.

While the Soviet era saw huge growth and relative prosperity (the city’s population passed one million in the 1970s), Tbilisi ­became a center of resistance to the late Soviet regime, culminating in troops killing 20 hunger strikers outside the government building on Rustaveli on 9th April 1989. Georgia’s parliament declared Georgian independence from the USSR in the same building exactly two years later. Rebellion against the government of Zviad Gamsakhurdia then erupted in fierce fighting on the city’s streets in December 1991, destroying several central landmark buildings.

The following years were dark ones. Although gun-toting gangsters ceased to rule the roost, the economy nosedived, and in 1993 Tbilisi had to find room for thousands of Georgian refugees fleeing from Abkhazia. While a few people got very rich in the 1990s, general living standards sank, corruption and crime were endemic, and frequent power cuts blacked out the city.

The name Tbilisi derives from Old Georgian t′⁠bilisi (Asomtavruli: ႲႡႨႪႨႱႨ, Mkhedruli: თბილისი), and further from tpili (Modern Georgian: თბილი, ‘warm’, itself from Old Georgian: ႲႴႨႪႨ ṭpili). The name T′⁠bili or T′⁠bilisi (literally, ‘warm location’) was therefore given to the city because of the area’s numerous sulfuric hot springs. Until 1936, the name of the city in English and most other languages was Tiflis, while the Georgian name was ტფილისი (Tpilisi).

In the Rose Revolution of November 2003, protesting crowds again filled central Tbilisi and finally poured into the parliament building to drive out President Eduard Shevardnadze. Since then, corruption has been reduced, Tbilisi has enjoyed a new flood of foreign aid and investment, the city center is being refurbished, and tourism is bouncing back. Though prosperity has yet to trickle down to many of the general populace, Tbilisi has more confidence, energy, and optimism than for many a year. 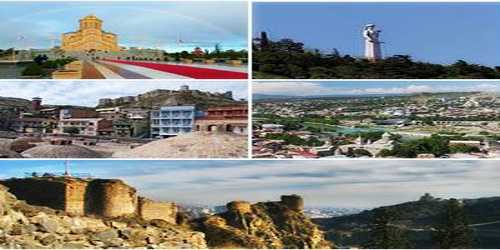 Administratively, the city is divided into raions (districts), which have their own units of central and local government with jurisdiction over a limited scope of affairs. This subdivision was established under Soviet rule in the 1930s, following the general subdivision of the Soviet Union. Since Georgia regained independence, the raion system was modified and reshuffled.

Modern Tbilisi is an attractive city: the Mtkvari, bordered on the right bank by a boulevard, lies partly in a steep gorge and is made broader by the Ortachalskaya hydroelectric plant in the city. Beside the river, the old town, with narrow, winding streets, is dominated by the ruins of the old fortress and the huge, symbolic figure of Georgia on a ridge above it. In the old town are the Sioni Cathedral, dating from the 5th century and often reconstructed the Metekhi Palace of the Georgian kings, and the 6th-century Anchikhati Church. Newer parts of the city lie beneath Mount Mtatsminda, accessible by a funicular rail line. North of the city is a large reservoir fed by irrigation canals.

Tbilisi is a major cultural and educational center, with a university, several other institutions of higher education, and more than 100 research establishments. The city is the principal industrial center of the region. Its engineering services are important in the production of electric locomotives, machine tools, agricultural machinery, and electrical equipment and in the repair of locomotives and rolling stock. Other industries make textiles; leather goods and footwear; furniture; beer, wine, and spirits; and a range of foodstuffs.