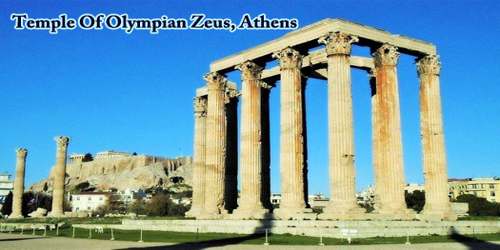 The Temple of Olympian Zeus (Greek: Ναός του Ολυμπίου Διός, Naós tou Olympíou Diós), is a former colossal temple at the center of the Greek capital Athens; it is also known as the Olympieion or Columns of the Olympian Zeus. It was dedicated to “Olympian” Zeus, a name originating from his position as head of the Olympian gods.

The building of the Temple of Olympian Zeus actually began in the 6th Century by Peisistratos but work was stopped either because of a lack of money or because Pisistratus’s son, Hippias, was overthrown in 510 BC. The temple was not finished until Emperor Hadrian completed in 131 AD, seven hundred years later. There were other attempts to continue the building. The Classical Greeks (487-379) left it unfinished because they believed it was too big and symbolized the arrogance of people who believed they were equal to the Gods. During the Third Century when the Macedonians ruled Athens work was begun again by Antiochus the IV of Syria who wanted to build the world’s largest temple and hired the Roman architect Cossotius to complete the job, but this ended when Antiochus died. In 86 BC, during Roman rule, the general Sulla took two columns from the unfinished temple to Rome for the Temple of Jupiter on the Capitoline Hill which influenced the development of the Corinthian style in Rome.

The temple stands within a walking distance from the Athens center, only 500 m southeast of the Acropolis and 700 m south of Syntagma Square. This temple is very close to other monuments of Athens, such as Kallimarmaro Stadium, the Hadrian’s Arch, and Zappeion Megaron. The temple’s glory was short-lived, as it fell into disuse after being pillaged during a barbarian invasion in 267 AD, just about a century after its completion. It was probably never repaired and was reduced to ruins thereafter. In the centuries after the fall of the Roman Empire, it was extensively quarried for building materials to supply building projects elsewhere in the city. Despite that, a substantial part of the temple remains today, notably sixteen of the original gigantic columns, and it continues to be part of a very important archaeological site of Greece.

Located South-East of Hadrian’s Arch, the temple covered a surface of approximately 5,000 sq m and was symmetrically positioned in a rectangular enclosure with a perimeter of 673 m. This immense terrace is surrounded by a strong precinct of porous stone, with a hundred buttresses, at a distance over 5 meters each. The total perimeter is 668 m. (2188 ft.) approaching the 4 stadia indicated by Pausanias.

The building was demolished after the death of Peisistratos and the construction of a colossal new Temple of Olympian Zeus was begun around 520 BC by his sons, Hippias and Hipparchos. They sought to surpass two famous contemporary temples, the Heraion of Samos and the second Temple of Artemis at Ephesus. Designed by the architects Antistates, Callaeschrus, Antimachides and Phormos, the Temple of Olympian Zeus was intended to be built of local limestone in the Doric style on a colossal platform measuring 41 m (134 ft 6 in) by 108 m (354 ft 4 in). It was to be flanked by a double colonnade of eight columns across the front and back and twenty-one on the flanks, surrounding the cella.

The entrance to this enclosure was attained by means of a propylon with four Doric columns, situated 45 m. from the North-Eastern angle; this propylon 10.5 m. broad and 5.4 deep, somewhat resembled the Agora Gateway erected under Augustus. Another principal, and impressive, the entrance of the temple, not in existence anymore, was on the West. The temple stood in the middle of the terrace. It was a dipteros (two-winged) octastylos (8-columned), that is, it had 5 rows of 20 columns at the sides and 3 rows of 8 columns at the two fronts, East and West. 124 Corinthian columns in all, 17.25 m. (56 ft.) in height, 1.7 m. (5,5 ft.) diameter, below at the summit. The architrave of 3 fillets is composed of 2 beams 2.25 m. high and 6 m. long. The temple itself measured at the base 107 m. (353.5 ft.) in length by 41 m. in width; therefore, along with the temples of Ephesos, Selinous and Agrigent, there were the largest temples of their time.

The fate of one of the columns is recorded by a Greek inscription on one of the surviving columns, which states that “on 27th April 1759 he pulled down the column”. This refers to the Turkish governor of Athens, Mustapha Agha Tzistarakis, who is recorded by a chronicler as having “destroyed one of Hadrian’s columns with gunpowder” in order to re-use the marble to make plaster for the Tzistarakis Mosque that he was building in the Monastiraki district of the city. During the Ottoman period, the temple was known to the Greeks as the Palace of Hadrian, while the Turks called it the Palace of Belkis, from a Turkish legend that the temple had been the residence of Solomon’s wife.

Originally there were 104 Corinthian columns of which only 15 remain standing. One of the columns actually blew down in a storm in 1852. Hadrian had erected a giant gold and ivory statue of Zeus inside the temple with an equally large one of himself next to it. Nothing remains of these statues. It is not known when the temple of Zeus was destroyed but it probably came down in an earthquake during the medieval period. Like other ancient buildings, much of it was taken away for building materials.

In the early 1800s a stylite a group of ascetics who spent long periods sitting or standing on top of pillars or columns. The word comes from the Greek stylos for column built his dwelling on top of one of the columns of the temple and it can be seen in early paintings and drawings.

he temple was excavated in 1889–1896 by Francis Penrose of the British School in Athens (who also played a leading role in the restoration of the Parthenon), in 1922 by the German archaeologist Gabriel Welter and in the 1960s by Greek archaeologists led by Ioannes Travlos. The temple, along with the surrounding ruins of other ancient structures, is a historical precinct administered by Ephorate of Antiquities of the Greek Interior Ministry. Today, the temple is an open-air museum, part of the unification of the archaeological sites of Athens. As a historical site, it is protected and supervised by the Ephorate of Antiquities.