“Teotihuacan” /teɪˌoʊtiːwəˈkɑːn/ (Spanish: Teotihuacán) (Spanish pronunciation: teotiwa’kan), is an ancient Mesoamerican city located 30 miles (50 km) northeast of modern-day Mexico City. It was massive, one of the first great cities of the Western Hemisphere. And its origins are a mystery. The city, which was designated a UNESCO World Heritage Site in 1987. It is the most visited archaeological site in Mexico, receiving 4,185,017 visitors in 2017.

No one knows who built or originally lived in this vast and complex pyramid city, believed to have left around 1,400 years ago. The site, covering around eight square miles, was later a pilgrimage site for the Aztecs, who gave it the name Teotihuacán. Remnants of apartment-like buildings suggest around 100,000 people lived here and worshipped at temples linked by the broad “Avenue of the Dead”.

Teotihuacan (meaning “the place where the gods were created”) is known today as the site of many of the most architecturally significant Mesoamerican pyramids built in the pre-Columbian Americas. It is the most important and largest pre-Columbian city in Mexico. At its zenith, perhaps in the first half of the first millennium CE, Teotihuacan was the largest city in the pre-Columbian Americas, with a population estimated at 125,000 or more, making it at least the sixth-largest city in the world during its epoch. After the collapse of Teotihuacan, central Mexico was dominated by the Toltecs of Tula until about 1150 CE.

The city covered 8 square miles (21 square kilometers) and supported a population of a hundred thousand, according to George Cowgill, an archaeologist at Arizona State University and a National Geographic Society grantee.

“It was the largest city anywhere in the Western Hemisphere before the 1400s,” Cowgill says. “It had thousands of residential compounds and scores of pyramid-temples… comparable to the largest pyramids of Egypt.”

Additionally, Teotihuacan exported fine obsidian tools that are found throughout Mesoamerica. The city is thought to have been established around 100 BCE, with major monuments continuously under construction until about 250 CE. The city may have lasted until sometime between the 7th and 8th centuries CE, but its major monuments were sacked and systematically burned around 550 CE.

The main buildings of Teotihuacan are connected by the Avenue of the Dead (or Miccaotli in the Aztec language Nahuatl). The Avenue of the Dead is a 130 foot (40-meter) wide, 1.5-mile (2.4 km) long road that’s oriented slightly east (15.5 degrees) of true north and points directly at the nearby sacred peak of Cerro Gordo, an extinct volcano. The city contains several large, important structures: The Pyramid of the Moon, the Pyramid of the Sun, the Ciudadela (“Citadel”) and the Temple of Quetzalcoatl (the Feathered Serpent).

The name Teōtīhuacān was given by the Nahuatl-speaking Aztecs centuries after the fall of the city around 550 CE. The original name of the city is unknown, but it appears in hieroglyphic texts from the Maya region as puh, or “Place of Reeds”. This suggests that, in the Maya civilization of the Classic period, Teotihuacan was understood as a Place of Reeds similar to other Postclassic Central Mexican settlements that took the name of Tollan, such as Tula-Hidalgo and Cholula.

As of January 23, 2018, the name “Teotihuacan” has come under scrutiny by experts, who now feel that the site’s name may have been changed by Spanish colonizers in the 16th century. Archaeologist Veronica Ortega of the National Institute of Anthropology and History states that the city appears to have actually been named “Teohuacan”, meaning “City of the Sun” rather than “City of the Gods”, as the current name suggests. 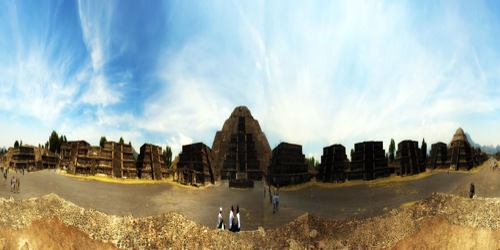 Surrounded by smaller pyramids and platforms, the ‘Pyramid of the Moon’ is situated at the northern end of the Avenue of the Dead and faces south. Standing at 140-feet (43-meters) high with a base measuring 426 by 511 feet (130 by 156 meters), the Pyramid of the Moon is the second largest structure in Teotihuacan. Inside the temple, researchers found buried animals and bodies, with heads that had been lobbed off, all thought to be offerings to gods or sanctification for successive layers of the pyramid as it was built.

Less than half a mile south of the ‘Pyramid of the Moon’ stands the largest structure in Teotihuacan, the ‘Pyramid of the Sun’. Facing west, the pyramid stands at 216 feet (66 meters) with a base measuring approximately 720 by 760 feet (220 by 230 meters).

Archaeological evidence suggests that Teotihuacan was a multi-ethnic city, with distinct quarters occupied by Otomi, Zapotec, Mixtec, Maya, and Nahua peoples. The Totonacs have always maintained that they were the ones who built it. The Aztecs repeated that story, but it has not been corroborated by archaeological findings.

Little is known about the language, politics, culture, and religion of the Teotihuacan people. They had a glyph-based written language, but it may have been limited to dates and names. The art and architecture of the city show it was a polytheistic society, with the primary deity being the Great Goddess of Teotihuacan, which is depicted as a spider goddess. Other deities include Quetzalcoatl (a vegetation god whose meaning changed in subsequent civilizations), the rain god Tlaloc, and the god of spring Xipe Totec, among others. The Teotihuacan priests practiced ritual sacrifices of animals and people to these gods.

The archaeological park of Teotihuacan is under threat from development pressures. In 2004, the governor of Mexico State, Arturo Montiel, gave permission for Wal-Mart to build a large store in the third archaeological zone of the park. According to Sergio Gómez Chávez, an archaeologist and researcher for Mexico’s National Institute of Anthropology and History (INAH) fragments of ancient pottery were found where trucks dumped the soil from the site. More recently, Teotihuacan has become the center of controversy over Resplandor Teotihuacano, a massive light and sound spectacular installed to create a nighttime show for tourists. Critics explain that a large number of perforations for the project have caused fractures in stones and irreversible damage, while the project will have limited benefit.

Artifacts found in the city and sites across Mexico suggest Teotihuacan was a wealthy trade metropolis in its prime. In particular, the city exported fine obsidian tools, including spear and dart heads. Teotihuacan had a monopoly on obsidian trade the most important deposit in Mesoamerica was located near the city.

Ceramics, such as pottery and other luxury goods, were also highly prized export goods because of their elaborate decorations. Other goods coming into and out of the city likely included cotton, cacao, and exotic feathers and shells, among other things.

Local harvests included beans, avocados, peppers, and squash, and the city farmers raised chickens and turkeys. The art and architecture styles of Teotihuacan are found widely throughout Mesoamerica, suggesting the city had far-reaching influence.