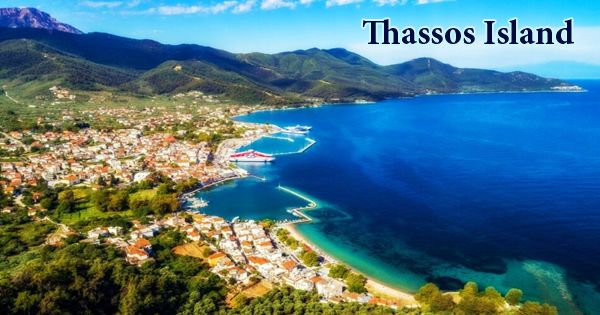 A stunning green Greek island situated on the northern side of the Aegean Sea is Thassos (Greek: Θάσος, Thásos), or Thasos. Administratively, it is part of the Kavala regional unit, Macedonia; the island is the northernmost and 12th largest Greek island by area. It is Greece’s northernmost island, and it is mountainous and green. Significant sections (about 50 percent) of the island are covered by cedar, oak, and pine forests. The island has 95 kilometers of coastline on its shores and nice sandy beaches. Thasos is also the name of the largest town on the island, located on the northern shore, opposite the mainland and about 10 kilometers (6 miles) from Keramoti (officially known as Limenas Thasou, “Port of Thasos”). For its termae making it a climatic and balneoclimateric resort area, Thassos Island is known from ancient times. 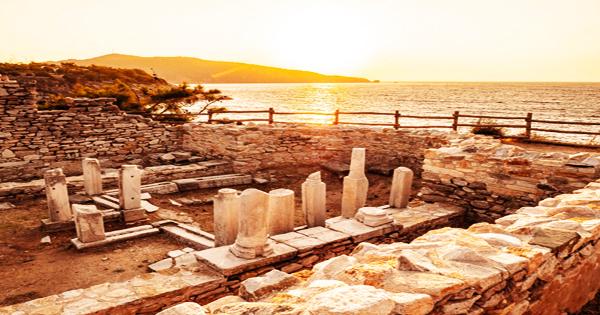 Thassos seems to be greener than many other Greek islands, which is because it receives a little more rain than other islands. Thasos Island is located approximately 7 km (4 mi) from the northern mainland and 20 kilometers (12 miles) south-east of Kavala in the northern Aegean Sea, and has a generally rounded shape, with no deep bays or major peninsulas. Thassos is 435 square kilometres in area and has a population of 13,527. It is situated in the eastern Macedonian and Thracian regions and belongs to the Nomos Kavala. Mount Ypsario, 1045 meters above sea level, is the highest point. The island of Samothrace is on the east of the island, although there are views of Athos on the west side.

Historically, the population of the island was mainly engaged in agriculture and stockbreeding, and inland villages were built, some of them connected to harbors on the shore through stairways (known as skalas). In the northeast, there’s a beautiful golden beach that’s more than 2 km long and the fabulous San Antonio beach on the south side. The Phoenicians, who were possibly drawn by the presence of gold, colonized the island. According to Herodotus, the name of the island comes from Thasus, the son of Phoenix, the chief of the Phoenicians. In the wars against the Persians, the island played a significant role. It was known for its gold mines, wine, nuts, and marble in ancient times. It was conquered in 1462 by the Turks and belonged to the Ottoman Empire until its reunification with the rest of Greece in 1912. 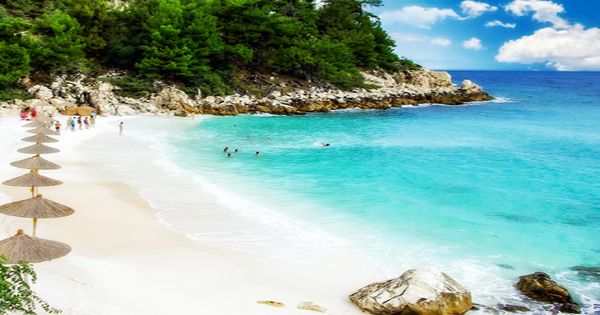 Thassos beaches, surrounded by lush greenery, and with crystal clear waters, boast a unique natural landscape. Some of them, while others are unspoiled and private, are arranged with umbrellas, sunbeds, and water sports facilities. The island is primarily created by the Rhodope Massif’s gneisses, schists, and marbles. Marble sequences are up to 500 m thick and are divided from the underlying gneisses by a transition zone about 300 m thick, called the T-zone, consisting of alternations of dolomitic and calcitic marbles intercalated by schists and gneisses, corresponding to the Falacron Marbles intercalated by schists and gneisses.

Skala Prinos is the largest port of Thassos and is located in the north-western part of the island. The harbor in the village of Prinos is Skala Prinos. Thassos island is also known for its hiking trails, apart from its stunning beaches. Crossing the island, several hiking trails lead to typical hillside villages, spectacular gorges, and mysterious caves. Thassos does have a couple of history buffs to enjoy, but not covered with ancient, historical sites like other islands. There is an archaeological site in Alyki, as well as the ancient agora in Limenas, the capital. 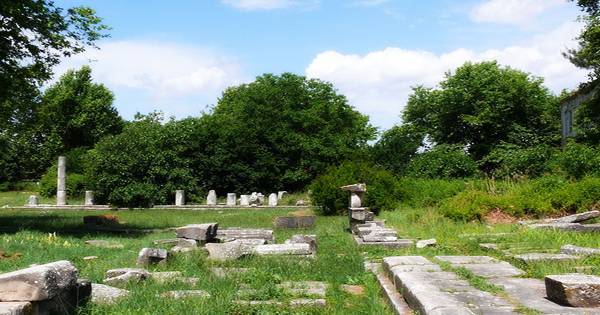 When paleolithic miners mined a shaft at the site of the modern-era Tzines Iron Mine for the extraction of limonitic ochre, the oldest mining on the island was dated to about 13,000 BC. Mining for base metals and precious metals began with the Phoenicians in the 7th century BC, followed by the Greeks in the 4th century, then the Romans. At the beginning of the 20th century, mining companies (most notably the Speidel mining company) mined the island’s zinc-lead-rich calamine minerals with a production of about 2 million tons and produced zinc oxide at a processing plant in Limenaria. From 1954 to 1964, iron ore was mined on a large scale, with a yield of about 3 million tonnes.

Thassos is ideal for a summer vacation with almost all-day sunshine, like all Greek islands, and while it rains more than some of the southern Aegean islands, there is still minimal rain in the summer months. By far, tourism is the most important economic activity. Honey, almonds, walnuts, olives (the popular Throuba olives), and olive oil, as well as wine, sheep, goat herding, and fishing are the main agricultural products on the island. The best time to visit this island is from the end of May until the beginning of October.