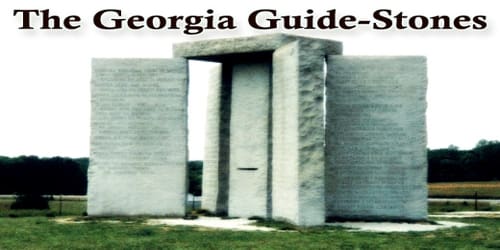 On one of the highest hilltops in Elbert County, Georgia, in the United States stands a giant granite monument, which is known as “The Georgia Guide-stones”. Engraved in eight different languages on the four giant stones that support the common capstone are 10 Guides or commandments. The monument is alternately referred to as The Georgia Guide-stones or the American Stonehenge. The monument stands at an approximate elevation of 750 feet (230 m) above sea level, about 90 miles (140 km) east of Atlanta, 45 miles (72 km) from Athens, Georgia and 9 miles (14 km) north of the center of the city of Elberton.

The structure is sometimes referred to as an “American Stonehenge”. The monument is 19 feet 3 inches (5.87 m) tall, made from six granite slabs weighing 237,746 pounds (107,840 kg) in all. The anonymity of the guide-stones authors and their apparent advocacy of population control, eugenics and internationalism have made them a target for controversy and conspiracy theory.

The origin of this strange monument is covered in mystery because no one knows the true identity of the man, or men, who commissioned its construction. All that is known for certain is that in June 1979, a well-dressed, articulate stranger visited the office of the Elberton Granite Finishing Company and announced that he wanted to build an edifice to transmit a message to mankind. He identified himself as R. C. Christian, but it soon became apparent that was not his real name. He said that he represented a group of men who wanted to offer direction to humanity, but to date, almost two decades later, no one knows who R. C. Christian really was, or the names of those he represented.

The messages engraved on the Georgia Guide-stones deal with four major fields:

(1) Governance and the establishment of a world government,

(3) The environment and man’s relationship to nature, and

The Message Of The Georgia Guide-Stones: A message consisting of a set of ten guidelines or principles is engraved on the Georgia Guide-stones in eight different languages, one language on each face of the four large upright stones. Moving clockwise around the structure from due north, these languages are – English, Spanish, Swahili, Hindi, Hebrew, Arabic, Traditional Chinese, and Russian.

Certainly, the group that commissioned the Georgia Guide-stones is one of many similar groups working together toward a New World Order, a new world economic system, and new world spirituality.

The Guide-stones continue to be a point of controversy. Conspiracy theorists and fundamentalists believe them to be the work of Satanists or the New World Order, fueled particularly by certain commandments such as “Guide reproduction wisely improving fitness and diversity” which can be ominously interpreted and the guide-stones have been seriously vandalized by such conspiracy theorists. Others believe them to be a message of wise prophecy, possibly the work of an eccentric man of science.

The hole that you see in the stone was drilled in the Center Stone so that the North Star could be visualized through it at any moment. This was one of several requirements stipulated by R.C. Christian for the building of the American Stonehenge and reflects his obsession with the alignment of the stars, the sun, and the moon. The Guide-Stones was briefly shown and discussed in the 1986 documentary film Sherman’s March and was featured extensively in a 2012 episode of Mysteries at the Museum, a “Monumental Mysteries Special” featuring Don Wildman.