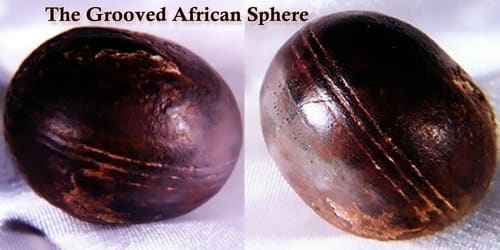 Over the last few decades, miners in South Africa have been digging up mysterious metal spheres. Origin unknown, these spheres measure approximately an inch or so in diameter, and some are etched with three parallel grooves running around the equator. Two types of spheres have been found: one is composed of solid bluish metal with flecks of white; the other is hollowed out and filled with a spongy white substance. The kicker is that the rock in which they where found is Precambrian and dated to 2.8 billion years old! Who made them and for what purpose is unknown.

Roelf Marx, a former curator of the museum of Klerksdorp, South Africa, where some of the spheres are housed, said:

“The spheres are a complete mystery. They look man-made, yet at the time in Earth’s history when they came to rest in this rock no intelligent life existed. They’re nothing like I have ever seen before.”

In the absence of a satisfactory natural explanation, the evidence is somewhat mysterious, leaving open the possibility that the South African grooved sphere found in a mineral deposit some 2.8 billion years old was made by an intelligent being. 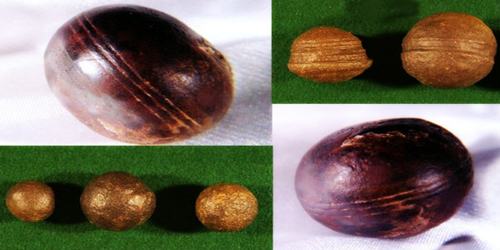 The Klerksdorp spheres typically range in diameter from 0.5 to 10 cm. As illustrated by Heinrich, they vary widely in shape from either approximate or flattened spheres to well-defined discs and often are intergrown. Petro graphic and X-ray diffraction analyses of specimens of these objects found that they consist either of hematite (Fe2O3) or wollastonite (CaSiO3) mixed with minor amounts of hematite and goethite (FeOOH). Observations by Cairncross and Nel and others indicated that many of the Klerksdorp spheres found in unaltered pyrophyllite consist of pyrite (FeS2). The color of the specimens studied by Heinrich ranged from dark reddish-brown, red, to dusky red. The color of those objects composed of pyrite is not known. All of the specimens of these objects, which were cut open by Heinrich, exhibited an extremely well-defined radial structure terminating on either the center or centers of a Klerksdorp sphere. Some of these objects exhibit well-defined and parallel latitudinal grooves or ridges. Even specimens consisting of intergrown flattened spheres exhibit such grooves.

It also seems that the spheres are so delicately balanced that, even with modern technology, they would need to have been made in zero gravity. The story goes that scientists at NASA were totally flawed when they examined them and were unable to come up with an explanation.

However, the claim that sedimentation formed the pyrophyllite is incorrect and significantly misrepresents the facts. Although either clays or volcanic ash accumulated 2.8 billion years ago along with numerous lava flows to create the Syferfontein Formation, metamorphism later altered the sediments to form pyrophyllite from either clays or volcanic ashes. The pyrophyllite is a mineral created by metamorphism at moderate temperature and burial depths of over several kilometers. Such metamorphism has significantly altered the original clays or volcanic ashes into greenschist grade metamorphics. As a result, the original sedimentary and igneous structures of these rocks have been, except locally, totally obliterated. Any primary concretions within both the sediments and volcanic rocks would also have been obliterated at this degree of metamorphism (Chopin and Schreyer 1983, Jackson 1992).

“Volcanoclastic units now converted to massive pyrophyllite (wonder-stone) are a significant component of the Syferfontein Fm. in the Ottosdal area. These rocks are generally massive and very fine-grained, but are locally thin-bedded and have shallow-amplitude ripple-marks on bedding planes and surfaces. Net et al. believed that volcanic ash deposited subaqueously in quiet water conditions became devitrified and altered to clay (bentonite) which was then metamorphosed to pyrophyllite to form these deposits.”

Various professional geologists agree that the Klerksdorp spheres originated as concretions, which formed in volcanic sediments, ash, or both after they accumulated 3.0 billion years ago.

Additionally, Roelf Marx, as quoted in Cairncross and Pope and Cairncross, former curator of the Klerksdorp Museum, reports that he was misquoted regarding these objects. Marx was quoted in popular articles as saying that the objects rotated by themselves in vibration-free display cases in the Klerksdorp Museum. Instead, Roelf Marx stated that they rotated because of the numerous earth tremors generated by underground blasting in local gold mining. Similarly, inquiries of scientists, who studied these objects, have found that the claims that NASA found these objects to be either perfectly balanced, unnatural, or puzzling are unsubstantiated.

Published descriptions of these spheres being harder than steel are meaningless in terms of Mohs scale of mineral hardness. Steel can vary from 4 to 8 on the Mohs scale, depending on the type of alloy, heat treatment, and whether it is case-hardened or not. An examination of several Klerksdorp spheres found none to be harder than 5.0 on the Mohs scale. For comparison, common glass has a Mohs hardness of 5.5. 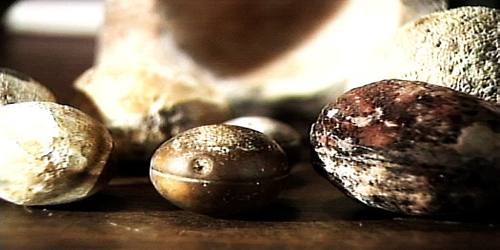 However, there is a complete lack of any evidence that either the nodules/spheres are artificial or that the grooves were cut prior to burial. As far as can be determined at this time, the spheres consist of pyrite nodules of metamorphic origin and goethite nodules formed by the weathering of the pyrite. Since the nodules are metamorphic in origin and, thus, formed by metamorphism while the enclosing strata were buried under kilometers of rock, the grooves, if artificial, had to have been cut after they had collected from the pyrophyllite during quarrying operations. As a result, the grooves are far less than 2.8 billion old. The nodules are clearly of natural origin and less than 2.8 billion years old.