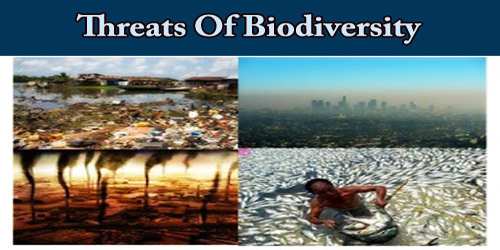 Biodiversity or Biological diversity is a term that describes the variety of living beings on earth. In short, it is described as a degree of variation of life. Biological diversity encompasses microorganisms, plants, animals, and ecosystems such as coral reefs, forests, rainforests, deserts, etc.

Biodiversity is not distributed evenly on Earth and is the richest in the tropics. These tropical forest ecosystems cover less than 10 percent of the earth’s surface and contain about 90 percent of the world’s species. Marine biodiversity is usually highest along coasts in the Western Pacific, where sea surface temperature is highest, and in the mid-latitudinal band in all oceans. There are latitudinal gradients in species diversity. Biodiversity generally tends to cluster in hotspots, and has been increasing through time, but will be likely to slow in the future.

Biodiversity is under serious threat as a result of human activities. The main dangers worldwide are population growth and resource consumption, climate change, and global warming, habitat conversion and urbanization, invasive alien species, over-exploitation of natural resources, and environmental degradation.

The three greatest proximate threats to biodiversity are habitat loss, overharvesting, and the introduction of exotic species. The first two of these are a direct result of human population growth and resource use. The third results from increased mobility and trade. A fourth major cause of extinction, anthropogenic (human-caused) climate change, has not yet had a large impact, but it is predicted to become significant during this century. Global climate change is also a consequence of the human population’s need for energy and the use of fossil fuels to meet those needs. Environmental issues, such as toxic pollution, have specifically targeted effects on species but are not generally seen as threats at the magnitude of the others.

In 2006, many species were formally classified as rare or endangered or threatened; moreover, scientists have estimated that millions more species are at risk which has not been formally recognized. About 40 percent of the 40,177 species assessed using the IUCN Red List criteria are now listed as threatened with extinction a total of 16,119.

Habitat Loss – Humans rely on technology to modify their environment and make it habitable. Other species cannot do this. Elimination of their habitat whether it is a forest, coral reef, grassland, or flowing river will kill the individuals in the species. Remove the entire habitat and the species will become extinct unless they are among the few species that do well in human-built environments. Human destruction of habitats (habitat generally refers to the part of the ecosystem required by a particular species) accelerated in the latter half of the twentieth century. Consider the exceptional biodiversity of Sumatra: it is home to one species of orangutan, a species of a critically endangered elephant, and the Sumatran tiger, but half of Sumatra’s forest is now gone. The neighboring island of Borneo, home to the other species of orangutan, has lost a similar area of forest. Forest loss continues in protected areas of Borneo. The orangutan in Borneo is listed as endangered by the International Union for Conservation of Nature (IUCN), but it is simply the most visible of thousands of species that will not survive the disappearance of the forests of Borneo. The forests are removed for timber and to plant palm oil plantations. Palm oil is used in many products including food products, cosmetics, and biodiesel in Europe. A five-year estimate of global forest cover loss for the years 2000–2005 was 3.1 percent. In the humid tropics where forest loss is primarily from timber extraction, 272,000 km2 was lost out of a global total of 11,564,000 km2 (or 2.4 percent). In the tropics, these losses certainly also represent the extinction of species because of high levels of endemism.

Habitat destruction can affect ecosystems other than forests. Rivers and streams are important ecosystems and are frequently modified through land development and from damming or water removal. Damming of rivers affects the water flow and access to all parts of a river. Differing flow regimes can reduce or eliminate populations that are adapted to these changes in flow patterns. For example, an estimated 91percent of river lengths in the United States have been developed: they have modifications like dams, to create energy or store water; levees, to prevent flooding; or dredging or rerouting, to create a land that is more suitable for human development. Many fish species in the United States, especially rare species or species with restricted distributions, have seen declines caused by river damming and habitat loss. Research has confirmed that species of amphibians that must carry out parts of their life cycles in both aquatic and terrestrial habitats have a greater chance of suffering population declines and extinction because of the increased likelihood that one of their habitats or access between them will be lost.

Overharvesting – Overharvesting is a serious threat to many species, but particularly to aquatic species. There are many examples of regulated commercial fisheries monitored by fisheries scientists that have nevertheless collapsed. The western Atlantic cod fishery is the most spectacular recent collapse. While it was a hugely productive fishery for 400 years, the introduction of modern factory trawlers in the 1980s and the pressure on the fishery led to it becoming unsustainable. The causes of fishery collapse are both economic and political in nature. Most fisheries are managed as a common (shared) resource even when the fishing territory lies within a country’s territorial waters. Common resources are subject to economic pressure known as the tragedy of the commons in which essentially no fisher has a motivation to exercise restraint in harvesting a fishery when it is not owned by that fisher. The natural outcome of harvests of resources held in common is their overexploitation. While large fisheries are regulated to attempt to avoid this pressure, it still exists in the background. This overexploitation is exacerbated when access to the fishery is open and unregulated and when technology gives fishers the ability to overfish. In a few fisheries, the biological growth of the resource is less than the potential growth of the profits made from fishing if that time and money were invested elsewhere. In these cases, whales are an example of economic forces that will always drive toward fishing the population to extinction.

Coral reefs are extremely diverse marine ecosystems that face peril from several processes. Reefs are home to 1/3 of the world’s marine fish species about 4,000 species despite making up only 1 percent of marine habitats. Most home marine aquaria are stocked with wild-caught organisms, not cultured organisms. Although no species is known to have been driven extinct by the pet trade in marine species, there are studies showing that populations of some species have declined in response to harvesting, indicating that the harvest is not sustainable at those levels. There are concerns about the effect of the pet trade on some terrestrial species such as turtles, amphibians, birds, plants, and even the orangutan.

Bushmeat is the generic term used for wild animals killed for food. Hunting is practiced throughout the world, but hunting practices, particularly in equatorial Africa and parts of Asia, are believed to threaten several species with extinction. Traditionally, bush meat in Africa was hunted to feed families directly; however, recent commercialization of the practice now has bush meat available in grocery stores, which has increased harvest rates to the level of unsustainability. Additionally, human population growth has increased the need for protein foods that are not being met from agriculture. Species threatened by the bushmeat trade are mostly mammals including many primates living in the Congo Basin.

Invasive Species – An exotic or unnatural species can be any kind of organism that has been introduced to a foreign habitat. This introduction can cause major threats to the native species as they often become subject to great competition for resources, disease, and predation. When these species have successfully colonized the area, they are already called “invasive” ones.

Next to habitat loss, invasive species are ranked as the second biggest threat to biodiversity.

The greatest threat that invasive species can bring is their capability to change an entire habitat. These species are highly adaptable and can easily dominate a certain area. Because many natural species survive only in a particular environment, they tend to be displaced, or worse, perish.

Some places have very low possibilities for the invasion of species. Usually, these places include those with harsh environmental conditions like extreme temperatures and high salinity. 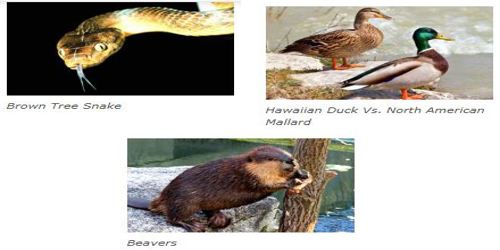 When the brown tree snake was introduced to Guam (an island in Pacific ocean), it wiped out 3/4th of the bird population by eating their eggs and young birds from the nests. This is one of the examples of invasive species by predation.

As Hawaiian ducks and North American ducks share a similar genetic composition, they mate each other to create a new breed of ducks. This causes of gradual reduction of Hawaiian ducks species. This is an example of invasive species by hybridization.

In the early 1940s, North American beavers were introduced to grow the fur industry in Argentina. The result was very astounding. Beavers chewed down the native South American tree roots and trunks which wiped out about 40 million acres of pure forest area into plain lands.

Most exotic species are brought to a certain place to replace or add something to the vegetation. It is important to note that not all introduced species become invasive. Most of these attempts have become successful.

Climate Change – Climate change, and specifically the anthropogenic (meaning, caused by humans) warming trend presently underway, is recognized as a major extinction threat, particularly when combined with other threats such as habitat loss. Scientists disagree about the likely magnitude of the effects, with extinction rate estimates ranging from 15 percent to 40 percent of species committed to extinction by 2050. Scientists do agree, however, that climate change will alter regional climates, including rainfall and snowfall patterns, making habitats less hospitable to the species living in them. The warming trend will shift colder climates toward the north and south poles, forcing species to move with their adapted climate norms while facing habitat gaps along the way. The shifting ranges will impose new competitive regimes on species as they find themselves in contact with other species not present in their historic range. One such unexpected species contact is between polar bears and grizzly bears. Previously, these two species had separate ranges. Now, their ranges are overlapping and there are documented cases of these two species mating and producing viable offspring. Changing climates also throw off species’ delicate timing adaptations to seasonal food resources and breeding times. Many contemporary mismatches to shifts in resource availability and timing have already been documented.

The 11 main direct threats to conservation are:

Finally, global warming will raise ocean levels due to meltwater from glaciers and the greater volume of warmer water. Shorelines will be inundated, reducing island size, which will have an effect on some species, and a number of islands will disappear entirely. Additionally, the gradual melting and subsequent refreezing of the poles, glaciers, and higher elevation mountains a cycle that has provided fresh water to environments for centuries will also be jeopardized. This could result in an overabundance of saltwater and a shortage of fresh water.