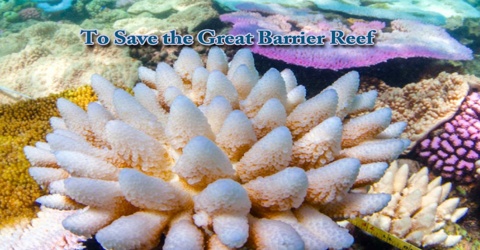 To Save the Great Barrier Reef

To Save the Great Barrier Reef

To save coral reefs around the world, global temperatures need to level off or decline, according to a new study of the Great Barrier Reef (GBR) over the past 20 years. Warming waters are the key driver of mass bleaching, the study found. As the world continues to heat up, these bleaching events will become more frequent and more severe, putting the future of coral reefs at risk. Bleaching occurs when the colorful algae that live inside the corals are expelled. That can happen for a lot of reasons — because the water is too warm or too cold, or because of extreme low tides. But bleaching is really bad for coral reefs, because the algae are essentially its farms, providing about 90 percent of the coral’s energy. Without it, the coral goes white as it starves. Since the 1980s, the world’s coral reefs have experienced three significant mass bleachings. In fact, one is currently ongoing — it started in 2014. Previous studies have shown that global warming is causing corals to bleach and sometimes die. Last year, record temperatures driven in part by a particularly strong El Niño caused 90 percent of the 1,429-mile reef to suffer from some level of bleaching.

The Great Barrier Reef, which stretches over an area of about 133,000 square miles off the coast of Queensland, Australia, is an important natural habitat as well as a major driver of Australian tourism. The GBR is home to more than 400 kinds of coral, over 1,500 species of tropical fish, more than 200 types of birds, and around 20 types of reptiles, including sea turtles. It was declared a World Heritage Site by UNESCO in 1981.

Climate change is considered the most significant threat to our Great Barrier Reef. Mass coral bleaching events due to Rising Ocean temperatures occurred in the summers of 1998, 2002 and 2006, and it is expected that coral bleaching will become an annual occurrence.

Climate change won’t just affect the coral on our Reef – some fish’s preferred temperature range lead them to seek new areas to live, thus causing chick mortality in seabirds that prey on the fish. Climate change will also affect the population and available habitat of marine mammals including the sea turtles and dugong.

Climate change is also predicted to cause the acidification of our oceans, having vast and dire consequences for all marine life, but in particular coral reefs. In fact, many parts of the Reef are already showing some effects of climate change, such as the increased frequency and severity of coral bleaching and decreased density of coral structures. Although most of the marine species are currently ok and there have been no records of extinctions, some ecologically important species, such as dugongs, marine turtles, seabirds, black teatfish and some sharks have seen significant declines in numbers.

Pollution and declining water quality are also pretty big threats to our Great Barrier Reef. The rivers of north-eastern Australia provide significant pollution of our Reef during tropical flood events with over 90% of this pollution being sourced from farms. Farm run-off is polluted as a result of overgrazing and excessive fertiliser and pesticide use. The increase in coastal development has seen the loss of coastal wetlands that traditionally have acted as natural filters for water running off the land. Coastal Development and Over-Fishing and By-Catch

Clearing or modifying wetlands, mangroves and other coastal habitats is a significant conservation concern.

Warming waters are the main thing to worry about when it comes to bleaching, the study says. Even protecting reefs from overfishing and pollution didn’t help the heat-stressed corals.

Global climate change is one of the biggest factors in the decline of the coral reef. If we want to save the reefs, we need to tackle climate change and reduce global warming. That can be done by committing to climate deals like the Paris agreement and reducing carbon dioxide emissions by switching to renewable energy. At risk are not just natural wonders like the corals reefs around the world, but the lives of thousands of people who depend on them. The Great Barrier Reef provides Australia with nearly $6 billion in revenue from tourism and fishing, including employment for almost 70,000 people. In countries like Indonesia and the Philippines, the reefs provide one of the primary sources of food.

The coral reefs aren’t dead yet, but there’s no time to waste. If we want to save the reefs, we need to act on climate change now. “We have to tackle fossil fuels and global climate change much faster”. “This is imperative.”