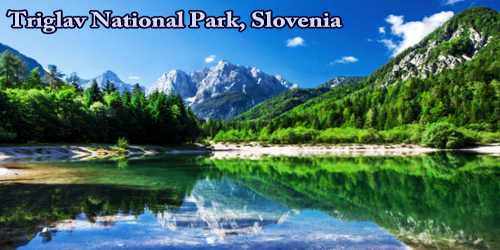 Triglav National Park (TNP) (Slovene: Triglavski narodni park) is the only national park in Slovenia; therefore it has great value for Slovenian people in their wish to preserve all the natural wonders in the park. Also, it is one of the oldest national parks in Europe, because the legal protection dates back to 1924 when the Triglav National Park was established. Legal means and public institutions protect the park since that year and their basic mission is the protection of nature, as well as carrying out research and professional tasks.

The park was established in its modern form in 1981 and is located in the northwestern part of the country, respectively the southeastern part of the Alpine massif. Mount Triglav, the highest peak of Julian Alps, stands almost in the middle of the national park. From it the valleys spread out radially, supplying water to two large river systems with their sources in the Julian Alps: the Soča and the Sava, flowing to the Adriatic and the Black Sea, respectively.

Triglav National Park was named after Mount Triglav, the highest mountain in Slovenia. In contrast, the lowest surface area in the national park is in the Tolmin Gorges, which represent the most beautiful entry point to the area. The area of the park is quite big, because it covers four percent of the surface of Slovenia and that is exactly 880 square kilometers. The Triglav National Park in Slovenia offers a unique experience, because of exceptional natural beauty and cultural heritage.

There are so many things to do and see that visitors may have a tough time to select some of their favorite places. Inside the country’s only national park visitors can hike through enchanting green valleys, quiet forests, and up to top of mighty Mount Triglav itself. But there are other points of interest in the park as well including the ski runs at Kranjska Gora and Vogel and the gentle waters of Lake Bohinj. The lake, in particular, is becoming more and more popular with travelers thanks to the crystal clear waters of the Sava River that flow into it. Visitors can also head out onto the lake for kayaking or SUP boarding. 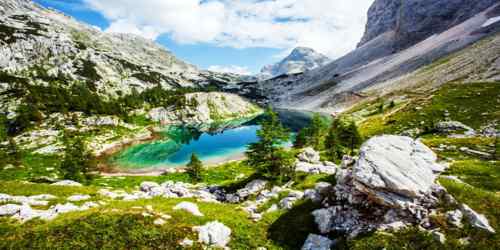 Although Slovenia counts three large regional parks and 44 smaller country (or ‘landscape’) parks, Triglav National Park (TNP) is the country’s only gazetted national park, and it includes almost all of the Alps lying within Slovenia. The proposal for the protection of the Triglav Lakes Valley area was first put forward by the seismologist Albin Belar in 1906 or 1908. However, the proposal was not accepted, as there was no legal base for it, and then valid laws prohibited any restriction of pasture. The strategic basis for the protection of the area, titled The Memorandum (Spomenica), and which explicitly mentioned the proposal of Belar, was submitted to the Provincial Government for Slovenia in 1920. The idea was finally implemented in 1924. Then, at an initiative by the Nature Protection Section of the Slovene Museum Society together with the Slovene Mountaineering Society, a twenty-year lease was taken out on the Triglav Lakes Valley area, some 14 km². It was destined to become an Alpine Conservation Park; however, permanent conservation was not possible at that time. The name Triglavski narodni park was first used in 1926 by Fran Jesenko.

In 1961, after many years of effort, the protection was renewed (this time on a permanent basis) and somewhat enlarged, embracing around 20 km². The protected area was officially designated as Triglav National Park. It was named after Mount Triglav, a symbol of Slovenia and of Slovene character. However, all objectives of a true national park were not attained and for that reason over the next two decades new proposals for expanding and modifying this protection were put forward.

Finally, in 1981, Triglav National Park was officially established in the modern form. A rearrangement was achieved and the park was given a new concept and expanded to 838 km². In 2010, the park expanded to include the settlement Kneške Ravne (Tolmin), according to wishes of its inhabitants, thus the new park area amounts to 880 km², which is 4% of the area of Slovenia.

The valley of Triglav’s seven lakes –

The valley of the Triglav’s lakes is a hight mountain Alpine valley located between Lake Bohinj and Trenta Valley. The valley of seven lakes is eight kilometers long and is considered as one of the most beautiful parts of the Julian Alps. The area was officially protected in 1924 as the Alpine Conservation Park, but later in 1961 Triglav’s seven lakes were protected under the state institution of the Triglav National Park in Slovenia.

The whole area of Seven Lakes Valley covers a distance of eight kilometers, making it quite a manageable place to explore. And within that space are ten lakes (not seven) which range from relatively small to daunting!

Whether visitors visit in the summer when the grass is at its greenest and the flowers are in bloom, or in the winter when snow is covering the entire area, the waters of the lakes are always so still and so clear that they perfectly reflect the sky and the surrounding mountainous landscape.

This turns the water into a mirror of the world around it. The effect is truly magical, and like nothing else visitors ever lay eyes on.

Soča River – For many, the Soča River in Slovenia is one of the most beautiful European rivers. Because of its natural beauty, preservation, and historical circumstances, the Soča River contains special significance and value in the hearts of the Slovenian people. The Soča River is a paradise for water sports enthusiasts, where exciting river activity is accompanied by unspoiled nature and breath-taking features of the river.

The valley of the Soča River and the surrounding mountains are also known for its history. Between 1915 and 1917 there were battles of the Isonzo, where more than 300 thousand Italian and Austro-Hungarian soldiers lost their lives. The emerald flow of the Soča River is lively, flowing over rocks and carves its 136 kilometers way towards the Adriatic Sea, creating numerous lagoons and embankments in its delta. Soča River originates in Trenta Valley, in the heart of Triglav National Park.

Soča River keeps torrential stream on its way, repeatedly forced to squeeze into tight gorges and canyons. Soča River in Slovenia is known for its deep and narrow gorges, carved into the lively valley bottom and beautiful waterfalls. The most stunning alpine river in Europe develops its emerald green color in the lower part of the Trenta Valley, where its riverbed spills over the white river gravels. Due to the withdrawal of the glaciers, the river has carved in the outgoing valley floor and produced a narrow ten meters deep gorge.

Julian Alps – The Julian Alps run through Triglav National Park and carry on across the border and into Northern Italy. The famous Mount Triglav, after which the park is named, is just one of the peaks of the Julian Alps. Hiking and climbing Mount Triglav is very possible. It takes six to seven hours to do so, and kids over ten can do it if they’re fit enough.

It does require the use of ropes as you get towards the summit, but most of the hike just requires some fitness and concentration. Visitors can head up Mount Triglav from Krma Valley for the smoothest and most sensible hike.

There are as many as 7000 animal species in the park. While on Triglav National Park hiking trip, visitors might encounter deer, a herd of chamois and marmots in the lowland area. In the Rocky Mountains, visitors might also encounter an ibex, the ruler, and a symbol of wildlife in the Julian Alps.

Waters in Triglav National Park consist of two watersheds: the Sava River watershed and the Soča River watershed. Many waterfalls can be found in the park, and most of them are located in the valleys of Soča River and its tributaries. The highest waterfall is Boka Falls (106 m). The lakes in the park are all of the glacial origins. The largest among them is Lake Bohinj. Others are the Triglav Lakes (located in the Triglav Lakes Valley), Lake Krn, and Lower and Upper Križ Lake. 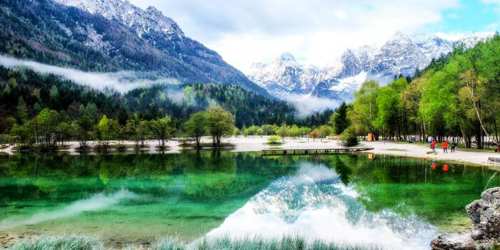 Triglav National Park (TNP) in winter is strikingly beautiful when the snow covers the alpine meadows, trees, and mountains, and when the lakes and waterfalls freeze. The first fallen snow is in the autumn when the temperature fluctuations create icy trails. Hence, visitors must be well prepared for taking a Triglav National Park tour to the mountains and have all the necessary equipment with them.

Trails are covered in snow and blazes are not visible, so it is important to know the terrain. The days are shorter and visitors will need more time to overcome certain distances. Most mountain cottages are closed in the wintertime. When nature rests, so do the animals who live here. So, hikers should be especially careful not to disturb the animals in the park.

The landscape is covered with a thick blanket of snow, so visitors will need to use snowshoes. Visitors can experience a snow fairytale on a Snowshoeing tour, where they will walk almost silently through the peaceful alpine landscape in high mountain pastures, beautiful valleys, and to the alpine posts.

Time to visit – Visitors can visit Triglav pretty much any time of year, and there are benefits to every season. Even a winter hike up Mount Triglav is entirely possible if a little more dangerous.

It might be best to avoid the very depths of winter (January and February) but other than that each season brings its own beauty which is entirely down to visitor’s tastes! Summer gets very hot and the winter snow sticks around until March, so the best time to visit is entirely their choice.