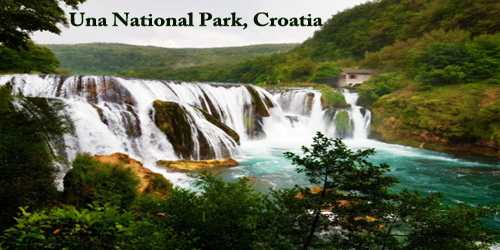 Una National Park (Bosnian: Nacionalni park Una) was established on 29 May 2008 around the rivers Upper Una River, Krka, and the Unac. It is Bosnia and Herzegovina’s largest national park. The main purpose of the park is to protect the unspoiled Una river and its tributaries Krka and Unac, which run through it.

Three rivers, gorgeous waterfalls, steep high river canyons, Medieval towers, forests, and a number of various sport and outdoor activities and the intact nature and well-preserved heritage, make the most important attractions for visitors of the Una National Park. Una National Park is also noted for its biodiversity, with 30 fish species, 130 bird species, and other animals, including lynx, fox, wolf, bear, and chamois.

The idea of protecting the river Una, dates back to the 60s of the last century, when the lovers of its value, organized the first international tourist Una regatta. Suitable environmental conditions have enabled the development of the special aquatic ecosystem, which makes this area one of the richest in the Dinarides.

In 1985 “Una emeralds” were established, an association for creating a culture of preservation and protection of the river Una. It became the National Park in 2008. 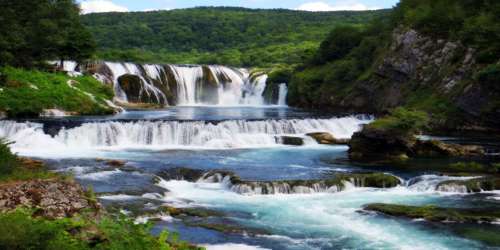 The Park area is located in the far west of Bosnia and Herzegovina on the border with Croatia. It encompasses the area canyon part of the rivers Una and Unac, and the space between those two rivers. The National Park has an area of 19,800 hectares.

A protection zone of the National Park is 198 km2 (76 sq mi) and stretches on the western side from the source of the Krka river and its course to the confluence with the Una on the state border of Bosnia and Herzegovina with Croatia from where park border follows the Una and state border to the town of Martin Brod and the confluence with the Unac. On the eastern side border of the park goes from the entrance of the Unac River into its canyon, few kilometers downstream from the town of Drvar, and follows the Unac and its canyon all the way to the confluence with the Una in the town of Martin Brod. From there park border follows the Una on the right and state border between Bosnia and Herzegovina and Croatia on the left until it reaches a small town of Ripač, few kilometers upstream from the town of Bihać.

Una, Unac, and Krka are three pearls of the natural heritage of the Una National Park which make the harmony of unique natural rarities, diverse and well preserved natural landscapes, and rich cultural and historical inheritance, that all provide exceptional conditions for various types of tourism. Parts of the Una and the Unac River form one of the largest fly fishing rivers of Europe, while the Una River itself is the paradise for fishermen who fish along with techniques of dry fly and water ball and lures. The sometimes steep Una River corridors are not always conducive to navigating her beautiful waters yet one of the most frequent motifs of the Una River are the small boats with anglers and a great number of kayaks. Una River has created a harmony with man, fish, birds, willows, bridges and old mills rarely seen today. International tourist kayak Regata Unska Regata rafting contest which is well known throughout Europe is traditionally held on Una River by Martin Brod where the river makes numerous rapids.

The Natura Art traditional settlement is located in the very beautiful part of the Una River flow, close to the waterfalls of “Dvoslap” and “Troslap”, and by its features well represent the real Bosnian traditions, where the hundred-years watermills are still in function. Here visitors find the old Bosnian houses and the blacksmith shop with the old tools that are used by locals for centuries in their rural households.

The Una’s waterfalls and white water rapids highlight the park. The most famous waterfalls are those at Martin Brod, where the popular “International Una Regatta” kayaking competition begins, and Štrbački Buk further downstream. Throughout the park, visitors can enjoy prime conditions for rafting, fishing, cycling, hiking, and camping. Jumping from the city bridges in Bihać and Bosanska Krupa is also popular. The largest waterfall on the Una river is Štrbački Buk and is one of the main features in the Park.

This area is a unique natural complex in this part of Europe due to its location on the border of three climate areas, karst formations and hydrography, which are, together with the basin of Korana and Krka, unique in the European range. Waterfalls and rapids of Una represent a remarkable heritage, and the entire upper flow is characterized by a rich biodiversity. Gentian, edelweiss, juniper pine are just some of the rare and endemic species in this area. Out of 1900 plant species, a hundred of them were recorded as medicinal, edible, aromatic, and vitamin. Complete protection in certain areas allows unimpeded growth and development of a large number of species and families of fungi. The exceptional quality of water fulfilled conditions for the development of many fish species, amphibians, and reptiles. In this area, there is 120 species of birds, among which is of particular interest quite an endangered species, the black grouse. Among the 50 protected species of mammals are endemic oro-Mediterranean hairy (fleece) mouse and eastern Alpine endemic Alpine mouse. There are also the largest European predators: wolf, lynx, bear, otter, badger, weasel.

Lush forests, endemic species of trees, crystal clear mountain rivers, springs, exciting landscapes, and above all, a healthy environment, make this place attractive for adventure tourism as rafting, kayaking, canoeing, hiking canyons, hiking, mountain bike rides. Streams in the Park are rich in fish, so the sports and recreational fly fishing is developed, as well as other allowed ways of fishing. Park offers diving in the wild river the so-called speed river diving, with a lot of excitement, through the fight with underwater currents and river obstacles.

Proximity to Plješivica mountain virgin forest, which stretches between Bosnia and Herzegovina and Croatia, and Croatia’s Plitvice Lakes National Park makes Una National Park a top destination for visitors. More importantly, all of the facts about these two National Parks, their proximity, natural, cultural, and historical richness, bring out the possibility and makes the viable idea of joint management and promotion.