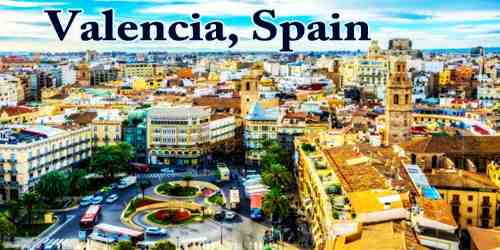 Valencia (Spanish: baˈlenθja), officially València (Valencian: vaˈlensia), is one of Spain’s largest and most famous towns/city. It is the capital of both the province of Valencia and the autonomous community of Valencia, as well as the historic capital of the former kingdom of Valencia, in eastern Spain. Valencia incorporates a unique mixture of old and new. The town contains a perfect geographical location; it’s situated on the banks of the Turia River, which flows into the Mediterranean Sea. It’s surrounded by orchards during a region called the Huerta de Valencia. 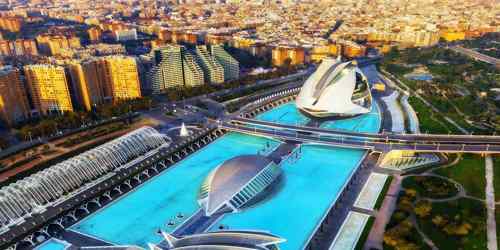 Therefore, during the knockdown wars between Romans, Visigoths, Christians and Moors Valencia had been a central point to be ruled by for centuries. Valencia is the third-largest metropolitan area in Spain, with a population ranging from 1.7 million to 2.5 million depending on how the metropolis is described. The earliest mention (Valentia) is made by the Roman historian Livy, who states that the consul Decimus Junius Brutus Callaicus settled the Lusitanian leader Viriathus soldier veterans there in 138 BCE. It was later converted into a prosperous Roman colony.

The Port of Valencia is Europe’s fifth busiest container port and the Mediterranean’s busiest container port. The city is ranked on the Globalization and World Cities Research Network as a Beta-global city. There are stunning cathedrals, medieval towers, and the remains of the Roman Empire’s place in the city. Valencia has been called the town of the 100 bell towers, of which the foremost outstanding are the Gothic Miguelete Tower (1381–1424), adjoining the cathedral, and therefore the hexagonal Tower of Santa Catalina (1688–1705), a fine example of Valencian Baroque style.

Because of its long history, Valencia has many celebrations and traditions, such as the Fallas, which were declared Spain’s Fiestas of National Tourist Interest in 1965 and a UNESCO Intangible Cultural Heritage in November 2016. Further south side of the city is the incredibly futuristic City of Arts and Sciences that includes an outlandish opera house, science museum, and the largest aquarium in Europe. Turia Park is to link it all. This 9-kilometer strip of green has fountains, walking paths, and shaded picnic spots.

Valencia finally adopted Christianity in the 13th century and became a mighty kingdom at the center of historical events in Spain. The battles for these lands continued and Valencia even became a temporary capital of Spain during the Civil War of 1936-1939. Now after Madrid and Barcelona it’s the third-largest city by population in Spain. During the rule of the Muslim kingdoms in Spain, it had the title Medina at-Tarab (City of Joy) according to one transliteration, or Medina at-Turab (City of Sands) according to another, since it was located on the banks of the River Turia.

Notable civic buildings include the luxurious late Gothic (15th century) Lonja de la Seda (Silk Exchange); the Palacio de la Diputación, which housed the parliament of the dominion of Valencia, with a 15th-century courtyard and beautifully paneled rooms; the Ayuntamiento (Town Hall), a contemporary building with important archives and therefore the city historical museum; and therefore the 18th-century Neoclassical Palacio de Justicia. Many know of Tomatina, the huge annual food fight in nearby Buñol, but the Las Fallas Festival in Valencia, with its hundreds of ornate statues set ablaze every spring, must be truly seen as believing. 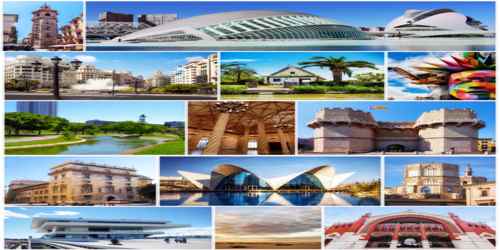 Valencia has many botanical gardens and art and ceramics museums. The City of Arts and Sciences is a large complex with a planetarium, museum of science, and arboretum in it. The representatives of different cultures coexist here, so the architectural heritage can be found here, reflecting both Moresque and Christian periods of their way. The city has numerous convention centers and venues for trade events, among them the Feria Valencia Convention and Exhibition Centre (Institución Ferial de Valencia) and also the Palau de Congres (Conference Palace), and a number of other 5-star hotels to accommodate business travelers.

The city also boasts a traditional bullfighting arena, and during the Fallas Festival, bullfights become a major attraction. In the 1960s, after severe flooding, the Turia River was diverted, and the old riverbed is now the Turia gardens, containing a playground for children, a fountain, and sports fields. The Palau de la Música is adjacent to the Turia gardens and therefore the City of Arts and Sciences lies at one end. The Valencia Bioparc maybe a zoo, also located within the Turia riverbed. Valencia is an exceptionally walkable city, with broad sidewalks lined with orange trees. Public transportation is reasonable and navigable, and also the local taxis are fair and located everywhere.