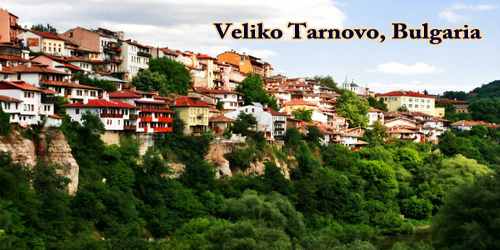 Veliko Tarnovo (Bulgarian: Велико Търново, romanized: Veliko Tǎrnovo, pronounced (vɛˈliko ˈtɤrnovo); “Great Tarnovo”) is certainly one of the less known most beautiful cities in Europe. It is a town in north-central Bulgaria and the administrative center of Veliko Tarnovo Province. One of Bulgaria’s oldest towns, Veliko Târnovo has as its centerpiece the magnificent restored Tsarevets Fortress, the citadel of the Second Bulgarian Empire.

Veliko Tarnovo has a rich history being capital of Bulgaria in the period XII-XIV c., beautiful location houses perched on hills and the Yantra River meandering through the city, and quite specific architecture, characteristic of the Bulgarian XIX c. Revival.

Often referred to as the “City of the Tsars”, Veliko Tarnovo is located on the Yantra River and is famously known as the historical capital of the Second Bulgarian Empire, attracting many tourists with its unique architecture. The old part of the town is situated on three hills, Tsarevets, Trapezitsa, and Sveta Gora, rising amidst the meanders of the Yantra. On Tsarevets are the palaces of the Bulgarian emperors and the Patriarchate, the Patriarchal Cathedral, and also a number of administrative and residential edifices surrounded by thick walls.

Trapezitsa is known for its many churches and as the former main residence of the nobility. During the Middle Ages, the town was among the main European centers of culture and gave its name to the architecture of the Tarnovo Artistic School, painting of the Tarnovo Artistic School, and to literature. Veliko Tarnovo is an important administrative, economic, educational, and cultural center of Northern Bulgaria. 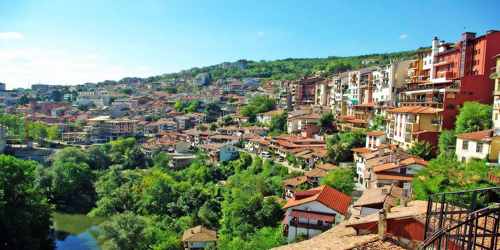 While there aren’t enough sightseeing opportunities to hold you for more than three to four days, Veliko Tarnovo, fortunately, has several good restaurants and hotel options. History buffs and wine enthusiasts will also have great day trip opportunities from the city. The nearby village of Arbanassi makes for the perfect tranquil weekend getaway. Other choices include trips to the ancient ruins of the Roman city Nikopolis ad Istrum and the quaint Maryan boutique winery.

The most widespread theory for the name’s origin holds that its original names of Tarnovgrad (Търновград) and Tarnovo (Търново) come from the Old Bulgarian тръневъ (tranev) or тръновъ (tranov), meaning “thorny”. The suffix “grad” means “city” in Bulgarian and in many Slavic languages. In 1965, the word велико (veliko), meaning “great”, was added to the original name in honor of the town’s status as an old capital of Bulgaria. This also helps distinguish it from the town of Malko Tarnovo. In Ottoman Turkish, it was called طرنوه (Modern Turkish: Tırnova).

Veliko Turnovo, the medieval capital of Bulgaria, is brought to us with more than 7000 years of history. The houses, stacked one above the other, situated on the steep hills of the town, show a remarkable and unique architectural style. The bridges, unexpectedly flying over the river, palaces and towers, spectacular museums, ancient columns with inscriptions left by our proud rulers, monasteries with unique mural paintings and frescoes, and the Arbanassi fortress-houses.

The nights are filled with the constant voice of the river, the glitters and dazed lights, playing on the fairy face of the town, and the noise of the energy-filled stormy student’s life.

In the 14th century, the city was described by Bulgarian cleric Gregory Tsamblak as “a very large city, handsome and surrounded by walls, with 12,000 to 15,000 inhabitants”, the fortress of Tsarevets being primary fortress and strongest bulwark from 1185 to 1393, housing the royal and the patriarchal palaces.

In the 14th century, as the Byzantine Empire weakened, Tarnovo claimed to be the Third Rome, based on its preeminent cultural influence in Eastern Europe.

Veliko Tarnovo is a city of many sights and one of the most popular tourist centers in Bulgaria. Its unique location on the three hills Tsarevets, Trapezitsa, and Sveta Gora, makes the town one of the most beautiful in Bulgaria and also adds a special charm to the city’s appearance and its own identity. A walk through this ancient city can leave anyone who stepped once on the narrow cobblestone streets speechless.

The old houses mixed with modern buildings look as if they are perched on one other and each of them is a unique monument of architecture. Veliko Tarnovo is one of the few places where nature and all build by men complement each other to create an unexpected harmony.

All monuments preserved in Veliko Tarnovo has kept the spirit of all ages and periods of Bulgarian history from Ancient times to present days. The first traces of human presence in the region dated from VI century BC. A Thracian village was found on Tsarevets dated back from the 3rd millennium B.O.T.

Throughout the Middle Ages, Tsarevgard Tarnov was the pearl in Bulgarian tsars’ crown. After Bulgarians declared their liberation from Byzantine rule in 1185, Tarnovo became the capital city of the Second Bulgarian Kingdom and remained the capital of Bulgaria until the invasion of the Ottomans in Europe.

The political upsurge and spiritual development of Tarnovo were halted when the Ottoman Empire captured the city on 17th July 1393. The siege lasted for three months, with the Bulgarian Patriarch Evtimiy leading the defense. Three years later, the Ottomans conquered the entire Bulgarian Empire.

Bulgarian resistance against Ottoman rule remained centered in Tarnovo (then known as Tırnova) until the end of the 17th century. Two major anti-Ottoman uprisings in 1598 and in 1686 started in the city. Tarnovo was consecutively a district (sanjak) capital in the Rumelia Eyalet, in the Silistria Eyalet, and finally in the Danube Vilayet.

On 7th July 1877, Russian troops liberated Veliko Tarnovo. On 10th February 1879 here in the old Ottoman municipal building, was held the fateful Constituent assembly. The Tarnovo Constitution was accepted then and it was one of the most democratic European constitutions back then. This historic act laid the foundations of the new Bulgarian state.

Today Veliko Tarnovo is a modern European city that is not only an administrative center but also a cultural one and a tourist destination. 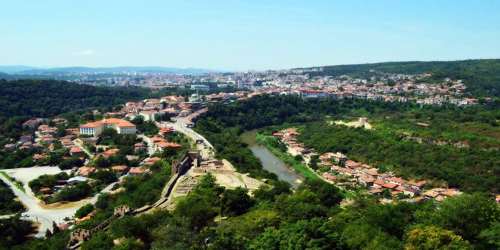 Today, Veliko Tarnovo is an administrative, cultural, historical, and tourist center of Bulgaria. The city is a geographical and communication center of Northern Bulgaria and one of the 28 administrative districts of the country as well. The size of Veliko Tarnovo district is 4662 sq. km. and it includes 10 municipalities with 14 towns/cities and 322 villages. The population is about 295 000 people.

Veliko Tarnovo is situated on several hills. The Tsarevets, Trapezitsa, Momina krepost were the main centers of kings and boyars during the Second Bulgarian State when the town was a capital. Sveta Gora (Holy Mountain) hill was a spiritual and literary center and part of the today’s Rectorate of Veliko Tarnovo University. The Garga Bair hill lies north of Trapezitsa. On the Orlovets hill are the Varusha neighborhood and the Akatsion and Kartala districts, the highest point is 241 m above sea level. The Troshana Hill is located south of Sveta Gora and west of the Motela dam, and Veliko Tarnovo Hills is being built on it.

Veliko Tarnovo has a humid continental climate (Dfa), according to the Köppen climate classification, experiencing warm summers and cold, snowy winters. The average minimum temperature in the coldest month, January, is about −7 °C (19 °F), while the average maximum in August, the hottest month 30 °C (86 °F). The highest recorded temperature was 41.1 °C (106 °F), while the lowest was −28.1 °C (−19 °F).

The population of Veliko Tarnovo is about 65 000 people, but including the students of “St St Cyril and Methodius” University (second biggest in the country) and the “VasilLevski” National Military University, the population increases by about 12 000.

The location combined with the good climate and natural resources together with the historical heritage and preserved architecture as well as the development of traditional arts and crafts provides Veliko Tarnovo with even better prospects for future development. Veliko Tarnovo is an important landmark for Bulgaria, and according to the statistics the city and its region are in the top ten of the most visited tourist destinations in Eastern Europe.

Flora – The deciduous forests (88%) predominate in Veliko Tarnovo beech, hornbeam, oak, cherry, lime, poplar, etc. There are woods of coniferous vegetation. They predominate fir tree, Pine, Abies grandis, Scots pine, Abies pinsapo, and other. Near the river, the springs and the marshlands are seen: Green algae, Diatom, and others. Over 25 types of mushrooms are encountered: Boletus edulis, Agaricus campestris, Macrolepiota procera, Chanterelle, and others.

Fauna – The territory of the region has a rich variety of the animal world 350 species of birds and 35 species of animals. Mammals include Hare, Fox, Deer, Wild boar, Hedgehogs, European ground squirrel. Birds include: Grey partridge, Crow, Common quail, Pheasant, White stork, Eurasian eagle-owl, Goose, and others. Over 180 species of insects are encountered: Cockchafer, Grasshopper, Firefly, and others. There are also reptiles: Turtles, Snakes, Lizards, and others. Local fish include Wels catfish, European perch, Common carp, Common barbel. 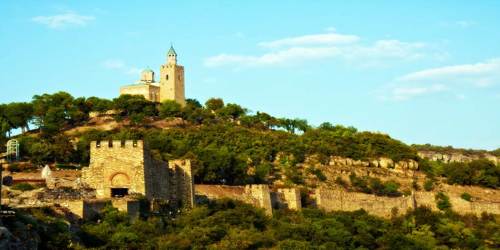 The most famous attractions in Veliko Tarnovo include: Tsarevets (the ruins of the fortress, the king’s palace and the church from the once glorious capital of Bulgaria); Gurko street; Samovodska charshia (a famous street with small shops selling antiques, crafts, and souvenirs); the Multimedia Visitor Centre (a historical wax figure museum); the Archeological Museum.

More than 90% of the residents are Eastern Orthodox. In Veliko Turnovo there is a mosque, a Catholic church, a community of the Evangelical Methodist Episcopal Church, and representatives of other Christian teachings. During the Middle Ages, the seat of the Patriarchate of Veliko Turnovo, the Diocese of Veliko Turnovo and Veliko Turnovo’s spiritual districts was in Turnovo.

In 2009 Veliko Tarnovo was awarded the title “Balkan capital of cultural tourism”. This took place at a ceremony in Belgrade, where the 47th congress of the International Hotel and Restaurants Association was held.

The Old Town is the perfect place for strolling, especially Samovodskata Charshia (Rakovski St.). During the second half of the 19th century, this was where artisans and farmers from the nearby village of Samovodene came on market days to sell their goods. In the 1980s the city revamped the area in an effort to recreate the atmosphere of the early 20th century. Samovodskata Charshia still contains several restored Revival buildings (the Bulgarian National Revival period was a cultural movement by Bulgarians to regain their identity from the Ottomans).

In Veliko Tornovo visitors can see fragments and foundations that are part of the architecture of the Second Bulgarian State. In the old part of the city and Asenova Mahala there can be seen Churches and houses that were dated through Ottoman rule. In the whole old part, houses from the Renaissance era were built. Characteristics of them are the ornate elements. Baroque architecture can be seen in most of the public buildings built in the early 20th century. In the central and the new part there are public buildings and residential buildings built in Baroque, Stalin Baroque style, and Modernist style.

In the river valley of Tsaravets Hill is the city’s most significant religious building. The Holy 40 Martyrs Church is about a 20-minute walk from the old town. The church was erected in 1230 to commemorate an important victory over the Byzantines. It was also the location from which Prince Ferdinand I proclaimed the independence of Bulgaria from the Ottoman Empire on 22nd September 1908. The church was badly damaged in an earthquake in 1913 but was restored in recent years. The church stores important historical records and the remains of several medieval tsars including Kaloyan, Ivan Assen I, and his wife Anna Maria.

From the larger Bulgarian cities, visitors can travel to Veliko Turnovo by train or bus. Regular bus service is available from Sofia and Varna to and from Veliko Turnovo with the buses arriving at the “Yug” (South) bus station. The journey takes about 3 hours.