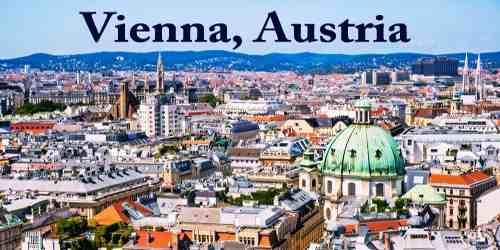 Vienna is Austria’s most populous city, with about 1.9 million inhabitants (2.6 million within the metropolitan area, nearly one-third of the country’s population), and its cultural, economic, and political center. It is the 6th-largest city by population within city limits in the European Union.

Modern Vienna has undergone several historical incarnations. From 1558 to 1918 it was an imperial city until 1806 the seat of the Holy Roman Empire and then the capital of the Austro-Hungarian Empire. In 1918 it became the capital of the truncated, landlocked central European country that emerged from World War I as a republic. From 1938 to 1945 Austria was a part of Adolf Hitler’s “Greater” Germany, and Vienna became “Greater” Vienna, reflecting the Nazi revision of the city limits. In the decade following World War II, Austria was occupied by British, French, American, and Soviet forces, and Vienna was divided into five zones, including an international zone, covering the Innere Stadt (“Inner City”).

In 1955 the State Treaty, by which the country regained independence, was signed with the four occupying powers, and Vienna became once again the capital of a sovereign Austria.

Until the beginning of the 20th century, it was the largest German-speaking city in the world, and before the splitting of the Austro-Hungarian Empire in World War I, the city had 2 million inhabitants. Today, it is the second-largest German-speaking city after Berlin. Vienna is host to many major international organizations, including the United Nations, OPEC, and the OSCE. The city is located in the eastern part of Austria and is close to the borders of the Czech Republic, Slovakia, and Hungary. These regions work together in a European Centrope border region. Along with nearby Bratislava, Vienna forms a metropolitan region with 3 million inhabitants.

In 2001, the city center was designated a UNESCO World Heritage Site. In July 2017 it was moved to the list of World Heritage in Danger. Additionally, to being known as the “City of Music” due to its musical legacy, Vienna is also said to be the “City of Dreams”, because of it being home to the world’s first psychoanalyst Sigmund Freud. Vienna’s ancestral roots lie in early Celtic and Roman settlements that transformed into a Medieval and Baroque city. It is well known for having played a pivotal role as a leading European music center, from the age of Viennese Classicism through the early part of the 20th century. The historic center of Vienna is rich in architectural ensembles, including Baroque palaces and gardens, and the late-19th-century Ringstraße lined with grand buildings, monuments, and parks.

Vienna’s musical and artistic legacy was shaped by famous intellectuals and composers, such as Mozart, Beethoven, and Sigmund Freud, who made the city their home. Today, Vienna boasts a lot of concert halls that stage opera and jazz concerts and music festivals, providing tourists a pulsating experience. If you’re in the area, hear the music at the State Opera or Musikverein.

Aside from the buzzing musical scene, Vienna’s roads are punctuated with pretty prefectures. From royal-imperial palaces to world-renowned museums, from charming buildings to works of art, Vienna is indeed a pretty city! 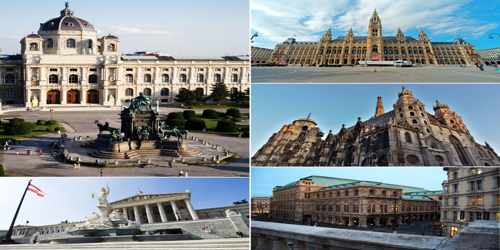 The English name Vienna is borrowed from the homonymous Italian version of the city’s name or the French Vienne. The etymology of the city’s name is still subject to scholarly dispute. Some claim that the name comes from vedunia, meaning “forest stream”, which subsequently produced the Old High German uuenia (wenia in modern writing), the New High German wien, and its dialectal variant wean. Others believe that the name comes from the Roman settlement name of Celtic extraction Vindobona, probably meaning “fair village, white settlement” from Celtic roots, vindo, meaning “bright” or “fair” as in the Irish fionn and the Welsh gwyn, and -bona “village, settlement”.

Vienna is among the least spoiled of the great old western European capitals. Its central core, the Innere Stadt, is easily manageable by foot and public transportation. In a city renowned for its architecture, many of Vienna’s urban prospects remain basically those devised over several centuries by imperial gardeners and architects. The skyline is still dominated by the spire of St. Stephen’s Cathedral and by the giant Ferris wheel in the city’s chief park, the Prater. The city suffered heavy damage in the last months of World War II, and much rebuilding was done after the war. Nevertheless, the character of Vienna as a whole remains much the same as in the years before 1914.

Vienna is located in northeastern Austria, at the easternmost extension of the Alps in the Vienna Basin. The earliest settlement, at the location of today’s inner city, was south of the meandering Danube while the city now spans both sides of the river. Elevation ranges from 151 to 542 m (495 to 1,778 ft). The city has a total area of 414.65 square kilometers (160.1 sq mi), making it the largest city in Austria by area. Vienna has an oceanic climate and features, according to the Köppen classification, a Cfb (oceanic) climate. The city has warm summers, with periodical precipitations that can reach its yearly most in July and August (66.6 and 66.5 mm respectively) and average high temperatures from June to September of approximately 21 to 27 °C (70 to 81 °F), with a record maximum exceeding 38 °C (100 °F) and a record low in September of 5.6 °C (42 °F). Winters are relatively dry and cold with average temperatures at about freezing point. Spring is variable and autumn cool, with possible snowfalls already in November.

The heart of the historic center is the Ringstraße, a circular boulevard lined with Vienna’s best-known sights such as the Imperial Palace, the Natural History Museum, the Austrian Parliament Building, and the Rathaus, among others. It’s a leisurely walk that any first-time tourist should experience. Another important historical monument in Vienna is the Schönbrunn Palace, the former imperial summer residence and one of Europe’s most breathtaking Baroque complexes.

Vienna reaches across the Danube on one side and climbs into the Vienna Woods on the other. There it includes the 1,585-foot (483-metre) Kahlen Mountain (Kahlenberg) and the 1,778-foot (542-metre) Hermanns Mountain (Hermannskogel), Vienna’s highest point. The Vienna Woods slope to the river in four roughly semicircular terraces, with the Innere Stadt occupying the second-lowest terrace. The city has a mean altitude of 1,804 feet (550 meters), but different sections vary considerably in height.

Vienna is one of the wealthiest regions in the European Union: Its gross regional product of EUR 47,200 per capita constituted 25.7% of Austria’s GDP in 2013. It amounts to 159% of the EU average. The city improved its position from 2012 on the ranking of the most economically powerful cities reaching number nine on the listing in 2015.

Administratively, Vienna is divided into 23 Bezirke (districts). At the core is the district I, the Innere Stadt, which contains most of the city’s famous structures. Surrounding the heart of the city is the Ringstrasse, or Ring, a circular road lined with grand buildings, monuments, and parks. Beyond the Ring are the inner suburbs (districts II–IX). The many palaces, churches, embassies, and other buildings in this area are elegant, though generally less imposing than those in district I. Leopoldstadt (district II) was the area allotted in 1622 to the Jews, who lived there until 1938. In this district is the famous 3,200-acre (1,295-hectare) Prater, formerly the hunting and riding preserve of the aristocracy but since 1766 a public park whose amenities include a stadium, fairgrounds, racetracks, and many restaurants. Beyond another ring road, the Gürtel, lies the outer suburbs (districts X–XX), which are largely residential. Also beyond the Gürtel is the vast Central Cemetery, where many great musical figures and other famous Viennese are buried. Districts XXI and XXII lie on the far side of the Danube; district XXIII is at the southern edge of the city.

There were 14.96 million overnight stays in Vienna in 2016 (+4.4% compared to 2015). In 2014, 6.2 million tourists visited Vienna and amounted to 13,524,266 overnight stays. The main markets for tourists are Germany, the United States, Italy and Russia. Between 2005 and 2013, Vienna was the world’s number one destination for international congresses and conventions. In 2014, 202 international conferences were held in Vienna, making it the second most popular congress location worldwide according to the statistics of the International Congress and Convention Association. Its largest conference center, the Austria Center Vienna (ACV) has a total capacity for around 20,000 people and is situated next to the United Nations Headquarters in Vienna. Other centers are the Messe Wien Exhibition & Congress Center (up to 3,300 people) and the Hofburg Palace (up to 4,900 people).

Vienna has a wide variety of museums and historic houses. Among them are the Albertina, with its immense collection of graphic arts, including engravings by Dürer and Rembrandt; the Kunsthistorisches Museum, with the largest Bruegel collection outside the Netherlands; the Academy of Fine Arts, housing the superb Habsburg collection of Old Masters, especially rich in Flemish and Dutch paintings; the Imperial Treasury, with the imperial crown and the regalia of the Holy Roman emperors and the house of Habsburg; the museums of natural history, ethnology, military history, and technology; the Clock Museum; and the Museum of the City of Vienna, with its exhibits of Viennese history.