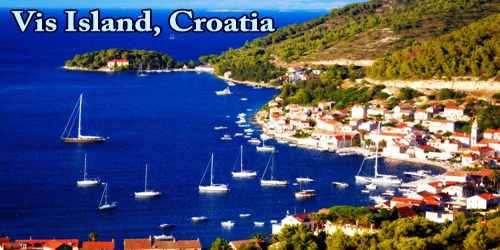 Vis (ʋîːs; Ancient Greek: Ἴσσα; Latin: Issa, Italian: Lissa) island of Croatia in the Adriatic Sea. It is the outermost major island of the Dalmatian archipelago. The farthest inhabited island off the Croatian mainland, Vis had a population of 3,617 in 2011. Vis has an area of 90.26 square kilometers (34.85 square miles). Its highest point is Hum, which is 587 meters (1,926 feet) above sea level. The island’s two largest settlements are the town of Vis on the island’s eastern side (the settlement for which the island was originally named) and Komiža on its western coast.

Vis, Croatia’s least known but most interesting island, was once Yugoslavia’s major naval base. Twenty-six years later, civilians have nurtured a delightfully low-key tourist island. Ferries from Split tie-up in Luka, the busy end of Vis harbor, and with the warships gone, sailing boats now invade each evening. Have a port-side drink while the mass moorings unfold, or stroll along the Riva, to the quieter village of Kut. 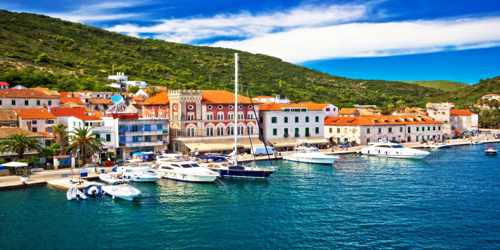 Once known for its thriving fishing industry in the late 19th and early 20th century, the main present-day industries on the island are agriculture and tourism. Vis town and Komiža are also seats of separate administrative municipalities that cover the entire island and nearby islets, which are both parts of Split-Dalmatia County.

In 2017 the movie Mamma Mia! Here We Go Again was filmed on location on Vis. In 2019 GEOPARK Vis archipelago became a member of UNESCO Global Geoparks.

The town of Vis itself contains the ruins of the Greek colony of Issa, founded in 390 BCE. The people were allied with Rome during several of its wars and became part of the empire in 47 BCE. Slav settlers began arriving in the 8th century CE, and during the Middle Ages, Byzantium held sway over the island. Thereafter, it was ruled by Venice, Austria, Napoleon I’s short-lived Illyrian Provinces and the Austro-Hungarian Empire. It became part of the new Yugoslav state in 1918 and of independent Croatia in 1991.

During WWII the island was also home to 1435 Squadron of the RAF flying Mark IX Spitfires in ground support of allied troops fighting in Italy. Major naval engagements were fought in nearby waters: in 1811 between Franco-Venetian and British fleets, the latter being victorious; and in 1866 between Austrian and Italian navies, the first clash of modern ironclad steam fleets, in which the Austrians won the day.

After the war, the Yugoslav People’s Army used the island as one of its main naval bases until abandoning the base in 1989. After Croatia became independent in 1991, its navy did not reclaim most of the facilities, and the many abandoned buildings are being used for civilian purposes and tourism, including tunnels, bunkers, and a secret submarine base. In 2008, 34 mines left over from World War II were cleared from the island.

As has happened with impoverished islands across the Mediterranean, Vis’ lack of development has become its drawcard as a tourist destination. International and local travelers alike now flock to Vis, seeking authenticity, nature, gourmet delights and peace, and quiet. Vis has its own distinct grape, vugava, a white varietal that’s been cultivated here since ancient times.

The island’s main industries are agriculture (mainly viticulture), fishing, fish refining, and tourism. The sea around Vis is rich with fish, especially bluefish (sardine, mackerel, and anchovy). Komiža fishermen of the 16th century developed their own type of fishing boat, the falkuša, which was used until the second half of the 20th century because of its excellent features.

Vis Old Town is filled with a Mediterranean influence and medieval architecture mixed with reminders of its military past.  The town is situated in a protected bay, with cafes and bars dotted along the waterfront.  The bay is beautiful with pristine, shimmering water. Vis has been only recently opened to tourists, and this town reflects a stress-free, relaxed aura. 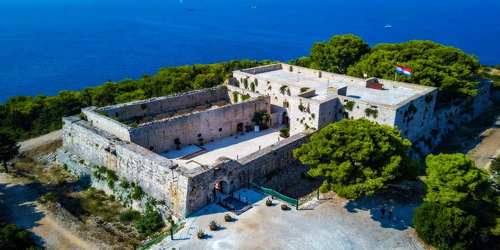 Fort George is a popular spot for cocktails and dining. This British fort was originally named after King George III after the British victory in the Battle of Vis in 1811. Now the fort contains a restaurant and bar, overlooking Vis Old Town.

After the sun sets and visitors are ready to explore the nightlife, one place they don’t want to miss is the 200-year-old Fort George. There visitors will dance the night away at open-air garden parties from 11 pm Tuesdays and twice-weekly all-night yacht parties in August. It’s also an intriguing venue to visit by day.

Vis is accessed only by ferry boat. Jadrolinija services the island using mainly the car ferry Petar Hektorović. There is also a high-speed passenger catamaran service provided by Jadrolinija.