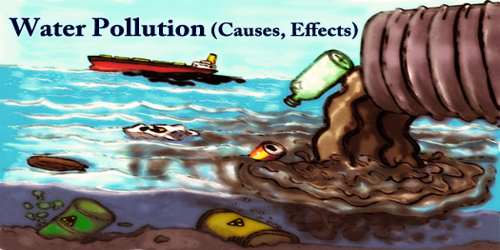 Water pollution occurs when harmful substances often chemicals or microorganisms contaminate a stream, river, lake, ocean, aquifer, or other body of water, degrading water quality and rendering it toxic to humans or the environment.

Water is uniquely vulnerable to pollution. Known as a “universal solvent,” water is able to dissolve more substances than any other liquid on earth. It’s the reason we have Kool-Aid and brilliant blue waterfalls. It’s also why water is so easily polluted. Toxic substances from farms, towns, and factories readily dissolve into and mix with it, causing water pollution.

The organization Global Oceanic Environmental Survey (GOES) consider water pollution as one of the main environmental problems that can present a danger for the existence of life on earth in the next decades. One of the main concerns, is that water pollution, heart phytoplankton who produce 70% of oxygen and remove a large part of carbon dioxide on earth. The organization proposes a number of measures for fixing the situation, but they should be taken in the next 10 years for being effective.

India and China are two countries with high levels of water pollution. An estimated 580 people in India die of water pollution related illness (including waterborne diseases) every day. About 90 percent of the water in the cities of China is polluted. As of 2007, half a billion Chinese had no access to safe drinking water.

Water contamination is categorized based on the source or the nature of the water body it affects. Some of the most common pollution types are:

Surface water pollution: Surface water includes water that is found naturally on the earth’s surface. They include lagoons, rivers, oceans, and lakes. Covering about 70 percent of the earth, surface water is what fills our oceans, lakes, rivers, and all those other blue bits on the world map. Contamination of such water features results from the dissolving or mixing of the water with pollutants. It can be accidental, such as oil spills in the ocean or intentional, like industries eliminating their wastes into rivers or sea.

Groundwater pollution: When rain falls and seeps deep into the earth, filling the cracks, crevices, and porous spaces of an aquifer (basically an underground storehouse of water), it becomes groundwater one of our least visible but most important natural resources. Nearly 40 percent of Americans rely on groundwater, pumped to the earth’s surface, for drinking water. For some folks in rural areas, it’s their only freshwater source. Groundwater gets polluted when contaminants from pesticides and fertilizers to waste leached from landfills and septic systems make their way into an aquifer, rendering it unsafe for human use. Ridding groundwater of contaminants can be difficult to impossible, as well as costly. Once polluted, an aquifer may be unusable for decades, or even thousands of years. Groundwater can also spread contamination far from the original polluting source as it seeps into streams, lakes, and oceans.

Chemicals pollution: Chemicals are the most common type of water contaminants. They affect both surface and underground water bodies. Industries and farming activities are the leading cause. Solvents and metals used in industries can pollute rivers and lakes. Weed, insects, and fungi control in farms using pesticides is the other cause of soil contamination. Chemical contamination also results from petroleum spills.

Thermal pollution: Heat is considered to be a water pollutant because it decreases the capacity of water to hold dissolved oxygen in solution, and it increases the rate of metabolism of fish. Valuable species of game fish (e.g., trout) cannot survive in water with very low levels of dissolved oxygen. A major source of heat is the practice of discharging cooling water from power plants into rivers; the discharged water may be as much as 15 °C (27 °F) warmer than the naturally occurring water.

Marine pollution: One common path of entry by contaminants to the sea are rivers. An example is directly discharging sewage and industrial waste into the ocean. Pollution such as this occurs particularly in developing nations. In fact, the 10 largest emitters of oceanic plastic pollution worldwide are, from the most to the least, China, Indonesia, Philippines, Vietnam, Sri Lanka, Thailand, Egypt, Malaysia, Nigeria, and Bangladesh, largely through the rivers Yangtze, Indus, Yellow, Hai, Nile, Ganges, Pearl, Amur, Niger, and the Mekong, and accounting for “90 percent of all the plastic that reaches the world’s oceans.”

Large gyres (vortexes) in the oceans trap floating plastic debris. Plastic debris can absorb toxic chemicals from ocean pollution, potentially poisoning any creature that eats it. Many of these long-lasting pieces end up in the stomachs of marine birds and animals. This results in obstruction of digestive pathways, which leads to reduced appetite or even starvation. There are a variety of secondary effects stemming not from the original pollutant, but a derivative condition. An example is silt-bearing surface runoff, which can inhibit the penetration of sunlight through the water column, hampering photosynthesis in aquatic plants.

Petroleum (oil) pollution: Petroleum (oil) pollution occurs when oil from roads and parking lots is carried in surface runoff into water bodies. Accidental oil spills are also a source of oil pollution as in the devastating spills from the tanker Exxon Valdez (which released more than 260,000 barrels in Alaska’s Prince William Sound in 1989) and from the Deepwater Horizon oil rig (which released more than 4 million barrels of oil into the Gulf of Mexico in 2010). Oil slicks eventually move toward shore, harming aquatic life and damaging recreation areas.

Nutrients pollution: Even though nutrients are essential for plant and aquatic life, an excess of it is dangerous. Wastewater and fertilizers have a high content of nutrients required for plant growth. Consequently, they cause rapid and uncontrolled growth of vegetation and algae on the water surface when they end up in the water. It leads to clogging of water filters and contamination of drinking water. It also uses up all the oxygen leading to the destruction of marine life.

Radioactive substances: Radioactive waste is any pollution that emits radiation beyond what is naturally released by the environment. It’s generated by uranium mining, nuclear power plants, and the production and testing of military weapons, as well as by universities and hospitals that use radioactive materials for research and medicine. Radioactive waste can persist in the environment for thousands of years, making disposal a major challenge. Consider the decommissioned Hanford nuclear weapons production site in Washington, where the cleanup of 56 million gallons of radioactive waste is expected to cost more than $100 billion and last through 2060. Accidentally released or improperly disposed of contaminants threaten groundwater, surface water, and marine resources.

Pollution of water affects both humans and aquatic life. Most water sources close to cities and urban centers are polluted by garbage and dumping of chemicals, legally or illegally. Below are some of the common as well as adverse effects of polluting water bodies.

Effects on human health: Every year, unsafe water sickens about 1 billion people. And low-income communities are disproportionately at risk because their homes are often closest to the most polluting industries. Life is a cycle, and humanity’s irresponsible behavior often comes back to haunt it. Adding contaminants to water bodies has affected the human family in several ways. According to a 2017 WHO report, 2.1 billion people do not have access to safe water. In 2019, it stated that 785 million people lack access to essential drinking water.

One of the main effects of this is diseases. Waterborne pathogens, in the form of disease-causing bacteria and viruses from human and animal waste, are a major cause of illness from contaminated drinking water. Diseases spread by unsafe water include cholera, giardia, and typhoid. Even in wealthy nations, accidental or illegal releases from sewage treatment facilities, as well as runoff from farms and urban areas, contribute harmful pathogens to waterways. World Health Organization (WHO) notes that there are about 120,000 cholera-related deaths annually. Also, the Fukushima tragedy, for example, increased the prevalence of thyroid cancer in exposed infants by 70%.

Death of aquatic life: Animals and plants that depend on water for life are the most affected by polluted water. Statistics from the Centre for Biological Diversity on the effects of the Deep Horizon spill provides a useful glimpse of the impact of pollution on aquatic life. In the report, the 2010 spill on the Gulf of Mexico harmed over 82,000 birds, 25,900 marine animals, 6165 sea turtles, and an unknown number of fish and invertebrates.

Destruction of the ecosystem: The introduction or elimination of certain microorganisms distorts the ecosystem. Nutrient pollution, for example, leads to an increase in algae, which depletes the water of oxygen, thereby leading to the death of fish and other aquatic life.

Food chain disruption: Pollution disrupts the food chain by moving the toxins from one level in the chain to higher levels. In some cases, pollution can wipe out an entire part of the food chain. Such affect the other organisms by either causing excessive growth, in case the predator dies or death (if it wipes out the prey).

Economic effects: A managing and restoring polluted water body is expensive. For example, Japan declared in 2019 that it is running out of space to contain the contaminated water after the Fukushima disaster. It currently has over a million tons of contaminated water stored in tanks. Research shows that it will cost at least $660 billion to clean up the effects of the disaster.

In normal conditions, it costs more to purify drinking water, not to mention the health cost of treating diseases resulting from contaminated water.

Water pollution may be analyzed through several broad categories of methods: physical, chemical, and biological. Most involve the collection of samples, followed by specialized analytical tests. Some methods may be conducted in situ, without sampling, such as temperature. Government agencies and research organizations have published standardized, validated analytical test methods to facilitate the comparability of results from disparate testing events.

Although pure water is rarely found in nature (because of the strong tendency of water to dissolve other substances), the characterization of water quality (i.e., clean or polluted) is a function of the intended use of the water. For example, water that is clean enough for swimming and fishing may not be clean enough for drinking and cooking. Water quality standards (limits on the number of impurities allowed in water intended for a particular use) provide a legal framework for the prevention of water pollution of all types.