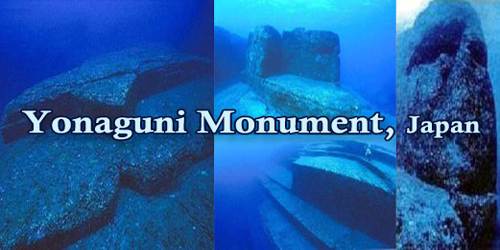 The “Yonaguni Monument” (Japanese: 与那国島海底地形 Hepburn: Yonaguni-jima Kaitei Chikei, lit. “Yonaguni Island Submarine Topography”), is an underwater rock structure that was discovered in the mid-1980s near Yonaguni Island, Japan. It is also known as “Yonaguni (Island) Submarine Ruins” (与那国（島）海底遺跡 Yonaguni(-jima) Kaitei Iseki), and It lies approximately a hundred kilometers east of Taiwan. While some believe the ziggurat-like formation is from an ancient city, others argue that it was naturally created.

The rectangular monument, which was first detected by a scuba diver, is more than 165 feet (50 meters) long and some 65 feet (20 meters) wide. A number of scholars have visited the site, but its origin remains uncertain. According to some, the monument is a man-made stepped pyramid. In addition to many straight lines, some of the rocks purportedly have carvings. Nearby are other formations, suggesting a submerged ancient city. This theory contends that the structures are at least 5,000 years old and belong to a lost civilization possibly the legendary Mu or Lemuria. 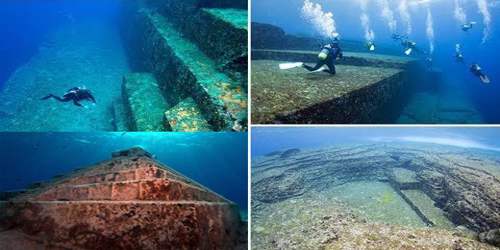 The formations feature “flat parallel edges, right angles, sharp edges, pillars, and columns”. These features led many to believe that the site could be man-made. The last time the area where the ‘Yonaguni Monument’ is submerged, would have been dry land, was 8 to 10 thousand years ago, during the most recent ice age. This makes the monument (if it really was constructed by humans) one of the oldest structures on the planet.

The formations are located below ‘Arakawabana’ (新川鼻; Yonaguni: Araga-bana) cliff which is the southern tip of Yonaguni island, with its main face oriented south-southeast. It is composed of medium to very fine sandstones and mudstones of the Lower Miocene Yaeyama Group believed to have been deposited about 20 million years ago. Most of the rocks in the formations are connected to the underlying rock mass (as opposed to being assembled out of freestanding rocks).

Some experts believe that the structures could be all that’s left of Mu, a fabled Pacific civilization rumored to have vanished beneath the waves. The structures include the ruins of a castle, a triumphal arch, five temples, and at least one large stadium, all of which are connected by roads and water channels and are partly shielded by what could be huge retaining walls.

Other researchers, however, claim that the monument is natural, shaped over the years by underwater currents. They state that the symmetry of the rocks is not as pronounced as reported and that the structure appears to be made out of solid rock rather than distinct blocks, which would suggest a human activity. Furthermore, they argue that the alleged carvings are naturally occurring scratches.

Masaaki Kimura, a marine geologist at the University of the Ryukyus in Japan who has been diving at the site to measure and map its formations for more than 15 years. He was first estimated that the monument must be at least 10,000 years old (8,000 BCE), dating it to a period when it would have been above water, and therefore surmised that the site may be a remnant of the mythical lost continent of Mu.

In a report given to the 21st Pacific Science Congress in 2007, Kimura revised this estimate and dated it to 2,000 to 3,000 years ago because the sea level then was close to current levels. He suggests that after construction, tectonic activity caused it to be submerged below sea level. Archaeologist Richard J. Pearson believes this to be unlikely. Kimura believes he can identify a pyramid, castles, roads, monuments and a stadium. He now believes that these structures are remnants of Yamatai.