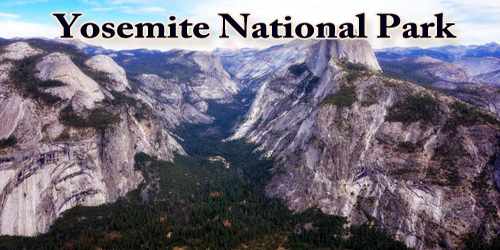 Yosemite National Park (/joʊˈsɛmɪti/ yoh-SEM-i-tee) is an American national park located in the western Sierra Nevada of Central California, bounded on the southeast by Sierra National Forest and on the northwest by Stanislaus National Forest. Yosemite is home to countless waterfalls. The best time to see waterfalls is in the spring. Peak run-off typically occurs in May or June, with some waterfalls often only a trickle or completely dry by August. The most famous among them is Yosemite Falls (2,425 ft) which flows from winter through early to mid-summer.

The name “Yosemite” (meaning “killer” in Miwok) originally referred to the name of a tribe which was driven out of the area (and possibly annihilated) by the Mariposa Battalion. Previously, the area had been called “Ahwahnee” (“big mouth”) by indigenous people.

The most famous and beautiful section of the park is Yosemite Valley, home to big-name tourist attractions, like Half Dome, El Capitan, and Yosemite Falls. Outside the valley, two main roads provide seasonal access to other areas of the park. Glacier Road allows access to stunning views over the Yosemite Valley. Tioga Road crosses the park in an east-west direction and runs through alpine scenery, where you can find lovely, and often less busy, hiking trails. Due to the altitude, Tioga Road opens later in the spring than Glacier Road. While the most famous sites are concentrated in Yosemite Valley, there are things to do all over the park, from hiking, biking, and climbing, to visiting museums and galleries.

The park is managed by the National Park Service and covers an area of 748,436 acres (1,169 sq mi; 3,029 km2) and sits in four counties: centered in Tuolumne and Mariposa, extending north and east to Mono and south to Madera County. Designated a World Heritage site in 1984, Yosemite is internationally recognized for its granite cliffs, waterfalls, clear streams, giant sequoia groves, lakes, mountains, meadows, glaciers, and biological diversity. Almost 95% of the park is designated wilderness.

The most well-known feature of Yosemite is ‘Half Dome’, a massive granite rock face that is sheet on one site and sloped enough for hiking on the other. Ansel Adams produced the most famous photography of Yosemite beginning in 1927 with the now iconic image of Half Dome. He called the valley “a glitter of green and golden wonder in a vast edifice of stone and space.” A gallery of his works can be found in Yosemite Village.

On average, about four million people visit Yosemite each year, and most spend the majority of their time in the seven square miles (18 km2) of Yosemite Valley. The park set a visitation record in 2016, surpassing five million visitors for the first time in its history. Yosemite was central to the development of the national park idea. Galen Clark and others lobbied to protect Yosemite Valley from development, ultimately leading to President Abraham Lincoln’s signing the Yosemite Grant in 1864. John Muir led a successful movement to have Congress establish a larger national park by 1890, one which encompassed the valley and its surrounding mountains and forests, paving the way for the National Park System.

Over 95% of Yosemite National Park is designated as Wilderness, meaning no permanent structures or other services are allowed. If visitor’s like roughing it, heading into this undiscovered section of the park opens up hundreds of square miles of pristine terrain linked by a comprehensive network of trails. Trails continue into the surrounding backcountry areas, including the Emigrant, Hoover, and Ansel Adams Wilderness Areas and the Sierra, Inyo, Toiyabe, and Stanislaus National Forests.

Indian people have lived in the Yosemite region for as long as 8,000 years. By the mid-nineteenth century, when native residents had their first contact with non-Indian people, they were primarily of Southern Miwok ancestry. The native people of Yosemite developed a complex culture rich in tradition, religion, songs, and political affiliations. Making use of the varied local ecosystems, they used plant and animal resources to the best of their abilities. The pattern of oaks and grassland noted by early visitors to Yosemite Valley is probably a direct result of the intentional burning of underbrush practiced by native people.

Yosemite is one of the largest and least fragmented habitat blocks in the Sierra Nevada, and the park supports a diversity of plants and animals. The park has an elevation range from 2,127 to 13,114 feet (648 to 3,997 m) and contains five major vegetation zones: chaparral and oak woodland, lower montane forest, upper montane forest, subalpine zone, and alpine. Of California’s 7,000 plant species, about 50% occur in the Sierra Nevada and more than 20% are within Yosemite. The park contains suitable habitat for more than 160 rare plants, with rare local geologic formations and unique soils characterizing the restricted ranges many of these plants occupy. Ice thickness in Yosemite Valley may have reached 4,000 feet (1,200 m) during the early glacial episode. The downslope movement of the ice masses cut and sculpted the U-shaped valley that attracts so many visitors to its scenic vistas today.

A free backcountry permit is required for overnight stays in Yosemite. Permits are limited and in high demand. Reservations can be made, but the park also reserves 40% of availability to give out on a first-come, first-served basis each day.