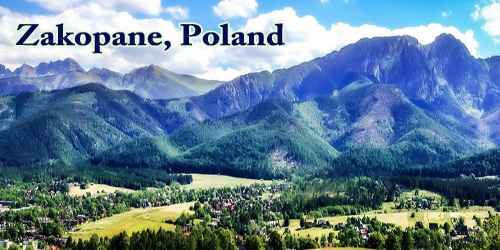 Zakopane is a lovely town in the extreme south of Poland, situated at the foothills of the majestic Tatra Mountains. It is one of the best places to visit in all of Europe. The whole town is like a winter amusement park ski lifts, quaint towns, mountains, blue lakes, and lush forests.

Situated on good rail and highway routes, Zakopane also serves as the cultural center for the area. The Chałubiński Memorial Tatra Museum, containing ethnographic and geologic displays, was opened in 1888. Zakopane is also the location of the Exhibition Hall of the Union of Polish Arts, and it has several notable monuments and a public garden. 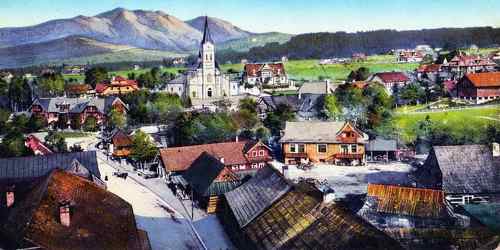 From 1975 to 1998, it was part of Nowy Sącz Province; since 1999, it has been part of Lesser Poland Province. As of 2017, its population was 27,266. Zakopane is a center of Goral culture and is often referred to as “the winter capital of Poland”. It is a popular destination for mountaineering, skiing, and tourism.

The unusual location of the town, hidden between a gentle range of Gubałówka and the rocky Tatra summits was a decisive factor in its career as a tourism center. As early as at the end of the 18th century Zakopane, a small and remote village located at the southern end of Poland, started to attract the first summer holidaymakers. The visitors arrived mainly from Cracow in horse carts, often carrying various domestic equipment, which they couldn’t find in the modest highland peasant cottage.

Zakopane lies near Poland’s border with Slovakia, in a valley between the Tatra Mountains and Gubałówka Hill. It can be reached by train or bus from the province capital, Kraków, about two hours away. Zakopane lies 800–1,000 meters above sea level and centers on the intersection of its Krupówki and Kościuszko Streets.

For the culture lovers, Zakopane is also decorated with museums and Tatra National Park gives nature lovers a chance to explore some stunning flora, fauna, caves, and streams.

Settlement rights were granted in 1578, but Zakopane did not become Polish in character until 1889 when Polish patriot Władysław Zamoyski purchased the area at public auction from a Berlin businessman. In 1924 he donated this property to form the basis of Tatra National Park. The city’s growth began in 1889 with the extension of a rail line to Zakopane; it was stimulated by the creation of the park and the influx of visitors attracted by the area’s winter-sports and mountaineering opportunities.

Before the outbreak of the Second World War, two huge investments in Zakopane had been finished, which secured Zakopane’s status as the winter capital of Poland. During the Second World War uninvited guests started to appear in the town. They were the Nazis and their families who used the confiscated hotels and boarding houses to spend their holidays in. Many of the Tatra tourist guides and Zakopane skiers put their life at risk during the war, helping the refugees to cross the Polish border through the mountains.

The Zakopane Style of Architecture is an architectural mode inspired by the regional art of Poland’s highland region known as Podhale. Drawing on the motifs and traditions in the buildings of the Carpathian Mountains, the style was pioneered by Stanislaw Witkiewicz and is now considered a core tradition of the Goral people.

Zakopane is visited by over 2,500,000 tourists a year. In the winter, Zakopane’s tourists are interested in winter sports activities such as skiing, snowboarding, ski jumping, snowmobiling, sleigh rides, snowshoe walks, and Ice skating. During the summer, Tourists come to do activities like hiking, climbing, bike, and horse ride the Tatras Mountain, and there are many trails in the Tatras. Popular tourist activity is taking a stroll through the town’s most popular street: Krupówki. It is lined with stores, restaurants, carnival rides, and performers.

Previously an art colony, this premier resort town is one of the best places to visit in Europe for anyone who wants to explore the world on a tight budget. Poland is well known for being a cheap destination in Europe and Zakopane is no exception as its super affordable.