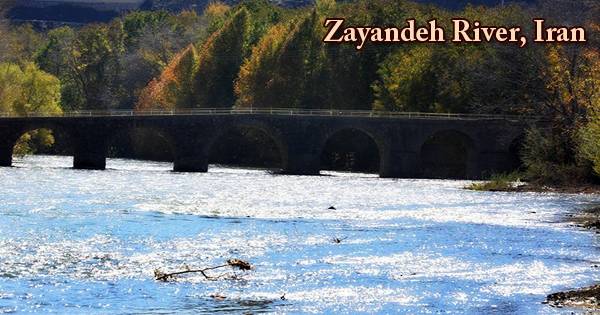 Zayandeh River or ‘Zayanderud’ (Persian: Zāyanderud, from زاینده‎ (zɑːjændɛ) “life-giver” and رود‎ (rʊːd) “river”), also spelled as ‘Zayandeh-Rood’ or ‘Zayanderood’, is the largest river in the province of Isfahan on the central plateau of Iran, flowing from west to east, and the most well-known river in Iran after Karoon. It is one of Iran’s main rivers that has given life to many parts of the world, as is evident by its name, which means “giver of birth”. As a result of the many fields that it irrigates on its course and thus brings them to life, it has come to be known by this name. This river has other names in different sources, too, like Zenderud (alive river), Zendrud, Zarrinrud (golden river), or Zarrinerud. 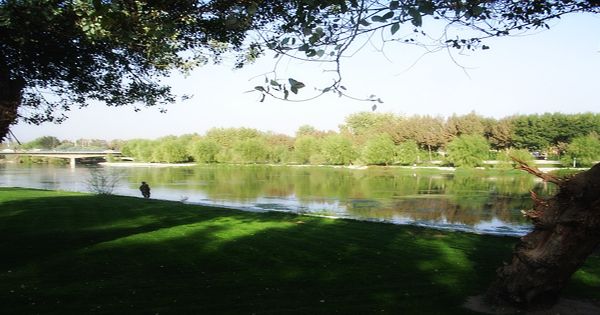 In the Zard-Kuh Subrange of the Zagros Mountains in the Chaharmahal and Bakhtiari Provinces, the Zayandeh begins. Before it ends in the Gavkhouni swamp, a seasonal salt lake, southeast of Isfahan city, it flows 400 kilometers (249 mi) eastwards. Unlike many of Iran’s seasonal rivers, the Zayandeh has substantial flow throughout the year. Many historical Safavid era bridges span in Zayandeh and flow through many parks. Following several years of seasonal dry-outs, the lower reaches of the river dried out entirely in the early 2010s. The main source of this river is situated between the provinces of Isfahan and Lorestan on the hillsides of the Zardkuh of Bakhtiari. Other sources, such as Kuhrang, Cham Darreh, Dimeh spring, also flow into Zayanderud and this roaring river travels to the east and reaches the central parts of the country via the Zagros mountains.

The basin of the Zayandeh River covers an area of 41,500 square kilometers, ranging from an altitude of 3,974 meters to 1,466 meters, with a mean rainfall of 130 millimeters (5 in) and a monthly average temperature of 3 C (37 °F) to 29 °C (84 °F). It has a maximum length of 420 kilometers and a width of between 10 and 20 meters in the valleys and 800 meters in Isfahan. In the Zayandeh River basin, there are 2,700 square kilometers (1,000 sq mi) of irrigated land with water originating from the nine major hydraulic units of the Zayandeh River, lateral valley wells, qanat, and springs. The water of the Zayandeh River has brought life to the people of central Iran, primarily in the provinces of Isfahan and Yazd. Water diverted per person prior to drying-out was 240 liters (63 US gallons/53 imp gallons) per day in urban areas and 150 liters (40 US gallons/33 imp gallons) per day in villages. 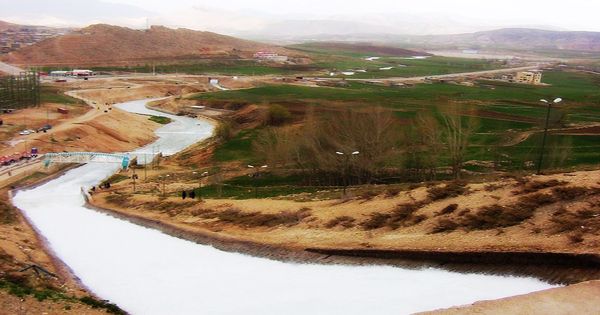 (The Origin of Zayanderud, Koohrang tunnel extracts water from inside the Zagros Mountains)

The river’s flow was measured to be 38 cubic meters per second. The river flow was estimated to be 1.2 cubic kilometers (0.3 cu mi) per annum in the 1970s or 38 cubic meters (1,340 cu ft) per second. The key part of Zayanderud’s unique popularity is definitely attributed to the passage of this city across Isfahan and its historical bridges. Although other bridges over Zayanderud were also built in other cities, the variety and beauty of the historical bridges of Isfahan bound the name of the city to the name of Zayanderud. In the Safavid period, these historical bridges were constructed and have an ancient history of around 400 years. The Koohrang Tunnel helps to connect a portion of the Karoon River’s waters to the Zayandeh River. Such tunnels allow the Zayandeh River to provide water to the Yazd Province, and Kerman Province will also benefit from the Zayandeh River with another tunnel under construction.

There are, however, other bridges that were constructed outside Isfahan over the river and are also popular. The Zaman Khan Bridge in Saman City is one of Zayanderud’s most prominent bridges in Isfahan Province. People have existed for thousands of years on the banks of the Zayandeh River. In a cave site called Qaleh Bozi near Dizicheh, SW of Isfahan, the earliest signs of human occupation along the river can be found. In the 6th millennium BC, a hypothetical pre-historic civilization is theorized to have flourished around the Zayandeh River in Iran. Archaeologists speculate that along the banks of the Zayandeh River, a possible early civilization existed, emerging at the same time as other ancient civilizations emerged alongside rivers in the area, such as the Sumerian civilization in Iraq and the civilization of the Indus Valley in ancient India.

A 50,000-year-old cave containing human and animal bones was discovered by archeological excavations in the Zayandeh River basin. The river Zayandeh crosses the city of Isfahan, Iran’s main cultural and economic center. Shaikh Bahai (an influential scholar and advisor to the Safavid dynasty) built and constructed a system of canals (maadi) in the 17th century to supply Zayandeh water to the suburbs of Isfahan. Water from the Zayandeh River helped the development of the population and the economy, helped set up Isfahan as a compelling focus, and gave a green scene to Isfahan, a city in a desert. Until the 1960s in Isfahan Province, the dispersion of water followed an archive professed to date from the sixteenth century. It divided the flow of the Zayandeh River into 33 sections that were then directly assigned to the region’s eight major districts. The water flow was separated either on a time basis or by the use of variable weirs at the district level so that the proportion could be retained irrespective of the flow height.

Many historical Safavid era bridges span the Zayandeh river bed, and the river used to pass through many parks. Si-o-Se Pol and Khaju Bridge are among Zayanderud’s best-known bridges; two historic bridges that are now Isfahan’s main historical attractions. Isfahan had been an oasis city for decades, known for its surrounding fertile lands and prosperity. Industrial demand for water was limited until the 1960s, allowing scarce water supplies to be mainly used for agriculture. Within Isfahan, roughly most of Zayanderud’s path is situated on two sides on which some green spaces and resorts have been provided. There are also several gardens on both sides of the river in the city of Saman, where several tourist establishments have been set up in recent years. For irrigation, 80% of Zayandeh’s extracted water is used, 10% for human consumption (drinking and domestic needs of a population of 4.5 million), 7% for industry (like the steel companies Zobahan-e-Esfahan and Foolad Mobarekeh and the petrochemical, refinery, and power plants of Isfahan) and 3% for other uses. 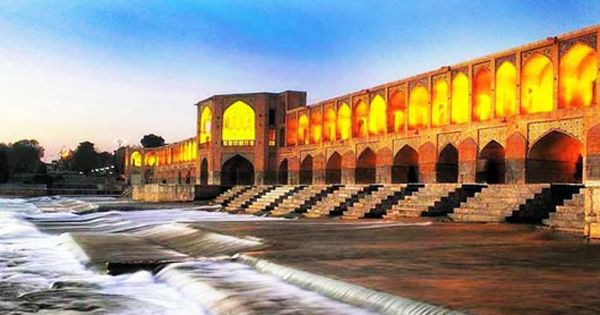 A major hydroelectric project to help regulate water flow and provide electricity production was the Chadegan Reservoir dam project in 1972. The Chadegan Reservoir has helped prevent the Zayandeh River from seasonal floods since 1972. In order to redirect water from the Karoon River to the Zayandeh, there were a variety of tunnel projects. These have helped to provide water in both Isfahan and Yazd provinces for the rising population and new industries. Visitors can find one of the most open sports along Zaman Khan Bridge in Saman City bypassing Zayanderud through various provinces, such as rafting (boating on the roaring water). Zayanderud plays a crucial role in the water supply of Isfahan, Iran, and some of the neighboring provinces, taking the tourism issues apart so that life without Zayanderud is unthinkable for people.