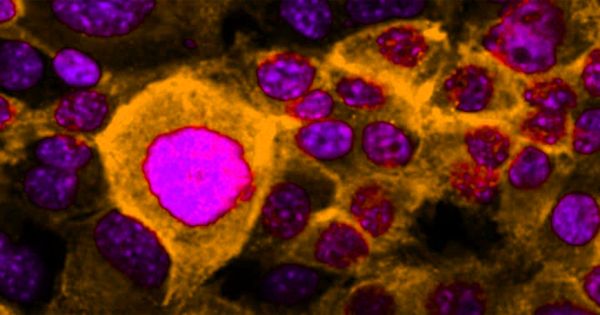 A New Dietary Fiber Improves the Potency of Immunotherapies against Cancer

Many people are unaware that the trillions of bacteria, viruses, and fungi that live in the gastrointestinal tract – collectively known as the gut microbiome – are linked to overall health, specifically cancer.

Manipulation of the gut microbiome to produce “beneficial” commensal microbes, which protect the host from pathogens and can boost immune responses, among other things, could help patients respond better to immune checkpoint inhibitors, a type of immunotherapy.

To that end, researchers at the University of Michigan have created a new dietary fiber formulation that boosts the efficacy of cancer immunotherapies by modulating the gut microbiome. Cancer patients taking immune checkpoint blockers may benefit from consuming this inulin gel dietary fiber in the future, according to James Moon, the John G. Searle Associate Professor of Pharmaceutical Sciences in the College of Pharmacy. The findings were published in the journal Nature Biomedical Engineering.

Researchers at the University of Michigan have developed a new dietary fiber formulation that improves the potency of immunotherapies against cancer by modulating the gut microbiome.

Inulin, a dietary fiber found in chicory root, Jerusalem artichoke, and other plants, is prebiotic that aids in the production of commensal bacteria in the colon. The team was able to provide a rich source of nutrients to allow beneficial gut microbes to expand more in the gastrointestinal tract by formulating inulin into a more colon-targeted inulin gel formulation.

“Consumption of the inulin gel expanded and increased the number of beneficial microbes in tumor-bearing mice,” said Kai Han, the study’s first author, and postdoctoral fellow. “These are advantageous commensal microbes found in cancer patients who respond well to immune checkpoint inhibitors.”

“Currently, the approaches to restoring a healthy gut microbiome include oral ingestion of defined probiotics or fecal microbiota transplantation,” Han explained. “However, developing these as pharmaceutical products would be extremely difficult due to scale-up manufacturing and quality control.”

The human microbiome is emerging as the next frontier in drug development. Evidence linking the potential health benefits of modulating gut microbiota to treating various diseases, including cancer, diabetes, obesity, and neurodegenerative diseases, has fueled intense research interest in the microbiome. A series of recent studies, in particular, have shown that the gut microbiome plays a critical role in cancer patients’ response rate to immune checkpoint inhibitors, according to Moon.

The researchers chose inulin because they wanted something that could be easily translated to the clinic. Inulin is a dietary fiber found in many plants that are widely consumed by the general public. It’s a sugar substitute that’s also found in candies and butter. Researchers discovered that inulin gel coats the gastrointestinal tract much better than inulin, leaving more nutrients for commensal microbes.

According to Han, the inulin gel also works with anti-PD-1 plus anti-CTLA-4 combo therapy (commonly used immune checkpoint inhibitors) to treat a variety of cancers. According to Moon, immune checkpoint inhibitors help 10-30% of cancer patients, depending on the type of cancer, and there is a risk of serious immune-related complications and side effects. Inflammation in the gastrointestinal tract and on the skin, for example, is common. Previous research has suggested that consuming inulin may help with gastrointestinal inflammation, such as colitis and IBD.

“As a result, inulin gel may alleviate gastrointestinal inflammation caused by immune checkpoint inhibitors, and we are currently testing this idea,” Moon explained. “Orally administered inulin gel induces systemic anti-tumor immunity via in situ modulations of the gut microbiome.”