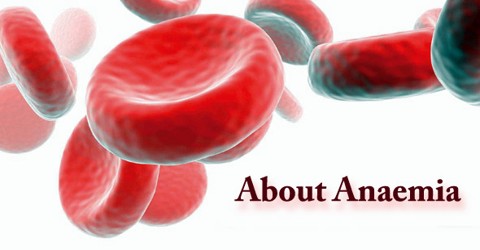 Anaemia is due to lack of haemoglobin in the blood which is below the normal level or due to less than normal levels of red blood cells in blood. It means that the body’s tissues and organs cannot get enough oxygen. Red blood cells are given their colour by a red pigment called haemoglobin – this pigment is also responsible for transporting oxygen around the body. So when there is a lack of red blood cells, there is also a shortage of haemoglobin – and not enough oxygen is delivered to the various tissues and organs. Anaemia that comes on quickly often has greater symptoms, which may include confusion, feeling like one is going to pass out, loss of consciousness, or increased thirst. Anaemia must be significant before a person becomes noticeably pale. It is the most common blood disorder, affecting about a third of the global population. Iron-deficiency anemia affects nearly 1 billion people. In 2013, anemia due to iron deficiency resulted in about 183,000 deaths – down from 213,000 deaths in 1990.

Anaemia diminishes the capacity of the blood to carry oxygen. Patients with anaemia may feel tired, fatigue easily, appear pale, develop palpitations, and become short of breath. Children with chronic anemia are prone to infections and learning problems. Women are more likely than men to have anaemia because of menstrual blood loss. In children, anaemia is most commonly due to insufficient iron in the diet. It is also often due to gastrointestinal bleeding caused by medications, including such common drugs as aspirin and ibuprofen. Types, Causes and Symptoms of Anaemia

There are various causes of anemia. It could be due to:

Anemia most commonly occurs due to nutritional problems. This includes lack of iron in the diet. Iron deficiency is the commonest form of anemia. The poorer nations 30-70% of the people have iron deficiency anaemia.

Certain vitamins like vitamin B12 and folic acid or folate are also essential in the normal production of RBCs in blood. Their lack in diet may lead to anaemia. Both vitamin B12 deficiency and folate deficiency are more common in older people, affecting around 1 in 10 people above the age of 75. There is an inherited condition called Pernicious anaemia where patients find it difficult to use the vitamin B 12 in diet for production of healthy RBCs. Some patients with anaemia have no symptoms. Others with anemia may feel:

Additional Symptoms may include:

On the other hand, if the anemia occurs rapidly (acute anemia), the patient may experience significant symptoms relatively quickly, and even with relative mild fluctuations of hemoglobin levels. Diagnosis and Treatment of Anaemia

To diagnose anaemia, several methods can be used; the most common of which is a complete blood count (CBC), which measures a number of blood components, including the patient’s hemoglobin and hematocrit levels, ratio of the volume of red blood cells to the total volume of blood. A CBC can be an indication of a patient’s overall health and can detect other conditions, such as leukemia or kidney disease.

There is a range of treatments for anaemia, all ultimately aimed at increasing the red blood cell count which in turn increases the amount of oxygen the blood carries. Depending on the type of anaemia, the treatment has to match the cause:

Iron Deficiency Anaemia – Iron supplements or dietary changes. If the condition is due to loss of blood, the bleeding must be found and stopped.

Vitamin Deficiency Anaemias – Treatments include dietary supplements and B-12 shots.