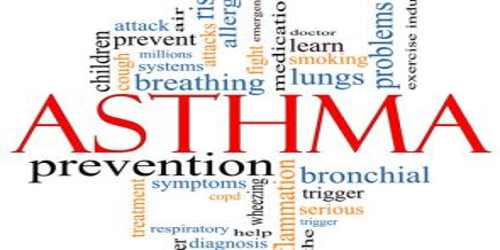 Asthma is a common lung disorder in which inflammation causes the bronchi to swell and narrow the airways, creating breathing difficulties that may range from mild to life-threatening. It is a complex clinical syndrome of chronic airway inflammation characterized by recurrent, reversible, airway obstruction. Airway inflammation also leads to airway hyperreactivity, which causes airways to narrow in response to various stimuli. Asthma is thought to be caused by a combination of genetic and environmental factors. Environmental factors include exposure to air pollution and allergens. Other potential triggers include medications such as aspirin and beta blockers. Diagnosis is usually based on the pattern of symptoms, response to therapy over time, and spirometry. There is no cure for asthma. Symptoms can be prevented by avoiding triggers, such as allergens and irritants, and by the use of inhaled corticosteroids.

The many potential triggers of asthma largely explain the different ways in which asthma can present. In most cases, the disease starts in early childhood from 2-6 years of age. In this age group, the cause of asthma is often linked to exposure to allergens, such as dust mites, tobacco smoke, and viral respiratory infections. In very young children, less than 2 years of age, asthma can be difficult to diagnose with certainty. Wheezing at this age often follows a viral infection and might disappear later, without ever leading to asthma. Asthma, however, can develop again in adulthood. Adult-onset asthma occurs more often in women, mostly middle-aged, and frequently follows a respiratory tract infection. The triggers in this group are usually nonallergic in nature.

Causes, Signs and Symptoms of Asthma

Asthma causes recurring periods of wheezing (a whistling sound when people breathe), chest tightness, shortness of breath, and coughing. The coughing often occurs at night or early in the morning. Asthma affects people of all ages, but it most often starts during childhood. People who suffer from this chronic condition (long-lasting or recurrent) are said to be asthmatic. The inside walls of an asthmatic’s airways are swollen or inflamed. This swelling or inflammation makes the airways extremely sensitive to irritations and increases your susceptibility to an allergic reaction. As inflammation causes the airways to become narrower, less air can pass through them, both to and from the lungs.

The classic signs and symptoms of asthma are shortness of breath, cough (often worse at night), and wheezing (high-pitched whistling sound produced by turbulent airflow through narrow airways, typically with exhalation). Many patients also report chest tightness. It is important to note that these symptoms are episodic, and individuals with asthma can go long periods of time without any symptoms.

Common triggers for asthmatic symptoms include exposure to allergens (pets, dust mites, cockroach, molds, and pollens), exercise, and viral infections. Tobacco use or exposure to secondhand smoke complicates asthma management. Many of the symptoms and signs of asthma are nonspecific and can be seen in other conditions as well. Asthma attacks can be mild, moderate, severe and very severe. At onset, an asthma attack does allow enough air to get into the lungs, but it does not let the carbon dioxide leave the lungs at a fast enough rate. Carbon dioxide – poisonous if not expelled – can build up in the lungs during a prolonged attack, lowering the amount of oxygen getting into patients bloodstream.

Treatment and Preventions of Asthma

The diagnosis of asthma begins with a detailed history and physical examination. Primary-care providers are familiar with the diagnosis of asthma, but specialists such as allergists or pulmonologists may be involved. In addition to a typical history, improvement with a trial of appropriate medications is very suggestive of asthma.

Asthma treatment can vary from inhalers to oral medications to drugs delivered in a nebulizer or breathing machine. Get a better understanding of how asthma medications work and learn about natural asthma remedies as well as ways to monitor patients breathing at home. The key treatments for asthma are steroids and other anti-inflammatory drugs. These asthma drugs both help to control asthma and prevent asthma attacks. Bronchial thermoplasty is a treatment for severe asthma. The procedure uses gentle heat to shrink the smooth muscles in patient’s lungs — the ones that tighten during asthma attacks and make it hard to breathe. The World Health Organization (WHO) recommends decreasing risk factors such as tobacco smoke, air pollution, and the number of lower respiratory infections. Other efforts that show promise include: limiting smoke exposure in utero, breastfeeding, and increased exposure to daycare or large families, but none are well supported enough to be recommended for this indication. Early pet exposure may be useful. Results from exposure to pets at other times are inconclusive and it is only recommended that pets be removed from the home if a person has allergic symptoms to said pet.