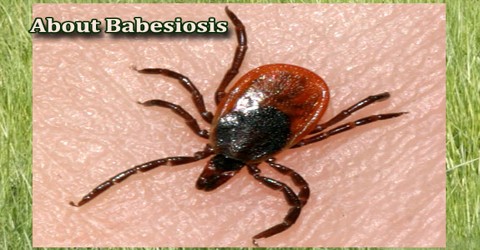 Babesiosis is a disease caused by infection with the parasite Babesia microti. It is a rare infection of the blood caused by a parasite that lives in some ticks. Babesiosis infections are more common in animals than in humans, but cases have been reported in parts of the United States. Babesiosis has been reported most often in the upper midwest and the northeastern areas of the country, especially along the coasts. It is a malaria-like parasitic disease caused by infection with Babesia, a genus of Apicomplexa. Human babesiosis is an uncommon but emerging disease in the Northeastern and Midwestern United States and parts of Europe, and sporadic throughout the rest of the world. It occurs in warm weather.

Babesia species are in the phylum Apicomplexa, which also has the protozoan parasites that cause malaria, toxoplasmosis, and cryptosporidiosis. Four clades of Babesia species infect humans. The main species in each clade are: Babesiosis is considered one of the most significant tick-borne infectious diseases in both domestic and wild mammals, and when it infects humans, it still poses substantial diagnostic and therapeutic challenges. This condition shares a plethora of clinical features with malaria, one of the most important parasitic diseases and can be fatal – especially in the immunocompromised and the elderly.

A majority of human cases of babesiosis are the result of infection with Babesia microti species complex, but may also be caused by Babesia divergens (which infects cattle) or by Babesia odocoilei (which infect cervids). The primary tick vector of Babesia microti is Ixodes scapularis, which is commonly known as deer or blacklegged ticks, and its primary reservoir is the white-footed mouse, which may also harbor Borrela burgdorferi, a causative agent of Lyme disease.

Some people who have babesiosis may not have any symptoms. When symptoms do occur, they are often similar to symptoms of the flu and include: However, sometimes the illness can quickly become serious, and can even cause death, especially in people who have had their spleen removed, are elderly, have liver disease, have kidney disease or have weak immune systems (due to conditions such as the human immunodeficiency virus (HIV), acquired immunodeficiency syndrome (AIDS) and cancer). Babesiosis can affect people of all ages, but most people who get it are in their 40s or 50s. Diagnosis, Treatment and Prevention of Babesiosi

Diagnosis can be made by microscopic examination of thick and thin blood smears stained with Giemsa. Repeated blood smears may need to be examined to make the diagnosis. Antibody detection by indirect fluorescent antibody (IFA) test is a complementary diagnostic test. Isolation of Babesia by inoculation of the patient’s blood into hamsters or gerbils may also assist in diagnosis. Animals inoculated with infective blood typically develop parasitemia (parasites circulating in their bloodstream) within 1 to 4 weeks.

Treatment of asymptomatic carriers should be considered if parasites are still detected after 3 months. In mild-to-moderate babesiosis, the treatment of choice is a combination of atovaquone and azithromycin. This regimen is preferred to clindamycin and quinine because side effects are fewer. The standard course is 7 to 10 days, but this is extended to at least 6 weeks in people with relapsing disease. Even mild cases are recommended to be treated to decrease the chance of inadvertently transmitting the infection by donating blood. In life-threatening cases, exchange transfusion is performed. In this procedure, the infected red blood cells are removed and replaced with uninfected ones. Imizol is a drug used for treatment of babesiosis in dogs. Extracts of the poisonous, bulbous plant Boophone disticha are used in the folk medicine of South Africa to treat equine babesiosis. B. disticha is a member of the daffodil family Amaryllidaceae and has also been used in preparations employed as arrow poisons, hallucinogens, and in embalming. The plant is rich in alkaloids, some of which display an action similar to that of scopolamine. The best way to prevent tick-borne diseases is to avoid being bitten by ticks. Use tick repellents according to their instructions to help prevent bites. Use an insect repellent containing 20% to 30% DEET. Wear light-colored clothing that covers most of our skin when we go into the woods or an area overgrown with grass and bushes. To remove an attached tick, use fine tweezers to grab the tick firmly by the head and pull. Do not use heat (such as a lit match), petroleum jelly or other methods to try to make the tick “back out” on its own. Wash the area where the tick was attached thoroughly with soap and water.