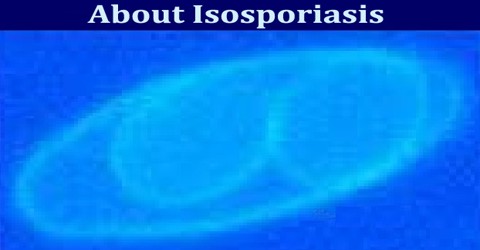 Isosporiasis, also known as cystoisosporiasis, is a disease caused by the protozoan Isospora belli of humans; human disease usually is mild except in cases of immunodeficiency, as in AIDS, where it may cause an intractable diarrhea. The parasite occurs widely, and infections are seen mainly in people with Aids, though outbreaks have also been seen among inhabitants of institutions such as psychiatric hospitals and day-care centres. It can cause severe diarrhoea in infants. It affects men and women equally. The infection is common around the world, including Africa and South America. The incubation period for the infection is about a week. The main reason for developing this infection is by mixing the feces of infected person with food or water bodies. Day care workers who are handling diapers of infected infants can easily spread the infection if they are not washing their hands properly.

An acute, but not blood-stained, and profoundly smelly diarrhoea, accompanied by cramping abdominal pains and a low fever. There can be malaise, loss of appetite and weight, malabsorption, and a low fever. The stools may be fatty/greasy, but nausea and vomiting are uncommon. It can last for weeks, and is especially severe in people with a weakened immune system, as well as in infants and children. Flatulence or fullness of stomach is also seen during this period. The use of trimethoprim-sullfamethoxazole to prevent pneumocystis carninii infections in patients with Aids can also reduce the risk of this infection occurring.

Most cases of isosporiasis can be diagnosed using a stool sample. To do so, the stool is stained with a dye and examined under a microscope. Another way to diagnose isosporiasis is by endoscopy or colonoscopy. These procedures use thin, long cameras inserted down the throat or through the anus to examine the small (and large) intestine. Samples of intestinal tissue are collected and examined in a lab.

It doesn’t respond well to most antibiotics used to treat other diarrhoeal infections. Usually it is managed with trimethoprim-sullfamethoxazole, and by the replacement of fluids lost., as dehydration can be marked In patients with Aids, indefinitely long treatment with these drugs may be needed, to attempt to suppress the infection and limit relapses. Alternatively pyrimethamine and sulphadoxine may be used. Although immune-deficient people tend to respond rather rapidly to treatment, there is a high rate of relapse. The most effective way to prevent isosporiasis is to avoid its sources —mainly potentially contaminated foods or human feces. This is particularly true for HIV-positive people with compromised immune systems raveling to tropical and subtropical countries where water and food could be contaminated. Drinking bottled water and making sure that food is cooked properly can help reduce the risk of isosporiasis while traveling to tropical and subtropical areas.

Good hand-washing and personal-hygiene practices should be used as well. One should wash their hands with soap and warm water after using the toilet, changing diapers, and before handling food. It is also important to teach children the importance of washing their hands, and how to properly wash their hands.