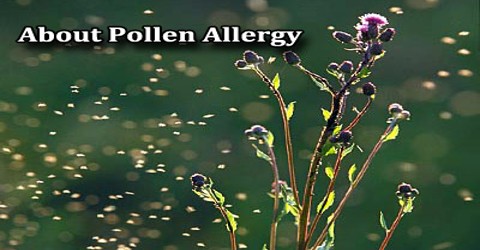 Plants produce microscopic round or oval pollen grains to reproduce. In some species, the plant uses the pollen from its own flowers to fertilize itself. Other types must be cross-pollinated; that is, in order for fertilization to take place and seeds to form, pollen must be transferred from the flower of one plant to that of another plant of the same species. Insects do this job for certain flowering plants, while other plants rely on wind transport. Grasses and trees, too, are important sources of allergenic pollens.

Each spring, summer, and fall, tiny pollen grains are released from trees, weeds, and grasses. These grains hitch rides on currents of air. Although the mission of pollen is to fertilize parts of other plants, many never reach their targets. Instead, pollen enters human noses and throats, triggering a type of seasonal allergic rhinitis called pollen allergy. Many people know this as hay fever. The chemical makeup of pollen is the basic factor that determines whether it is likely to cause hay fever. For example, pine tree pollen is produced in large amounts by a common tree, which would make it a good candidate for causing allergy. The chemical composition of pine pollen, however, appears to make it less allergenic than other types. Because pine pollen is heavy, it tends to fall straight down and does not scatter. Therefore, it rarely reaches human noses. Birch Pollen Allergy: Birch pollen is one of the most common airborne allergens during the spring. As the trees bloom, they release tiny grains of pollen that are scattered by the wind. A single birch tree can produce up to five million pollen grains, with many traveling distances of up to 100 yards from the parent tree.

Oak Pollen Allergy: Like birch trees, oak trees send pollen into the air during the spring. While oak pollen is considered to be mildly allergenic compared to the pollen of other trees, it stays in the air for longer periods of time. This can cause severe allergic reactions in some people with pollen allergies.

Grass Pollen Allergy: Grass is the primary trigger of pollen allergies during the summer months. It causes some of the most severe and difficult-to-treat symptoms.

Ragweed Allergy: Ragweed plants are the main culprits of allergies among weed pollens. They are the most active between the late spring and fall months. Depending on the location, however, ragweed may begin spreading its pollen as early as the last week of July and continue into the middle of October. Its wind-driven pollen can travel hundreds of miles and survive through a mild winter.

The types of pollen that most commonly cause allergic reactions are produced by the plain-looking plants (trees, grasses, and weeds) that do not have showy flowers. These plants manufacture small, light, dry pollen granules that are custom-made for wind transport. In addition, most allergenic pollen comes from plants that produce it in huge quantities. A single ragweed plant can generate a million grains of pollen a day. Pollen allergy symptoms most often include: As with other allergies, the best treatment is to avoid the allergen. However, pollen is very difficult to avoid. There are a few ways to treat pollen allergies:

Over-the-counter (OTC) drugs. Antihistamines block the histamine your body makes. If your nose is stuffy, decongestants can help you breathe easier. Some nasal sprays help allergy symptoms, too.

Prescription medication. If the OTC drugs don’t work, doctor may prescribe something stronger. Some prescribed meds block chemicals other than histamine that can trigger allergies. Others treat the symptoms caused by certain kinds of weed or grass pollen.