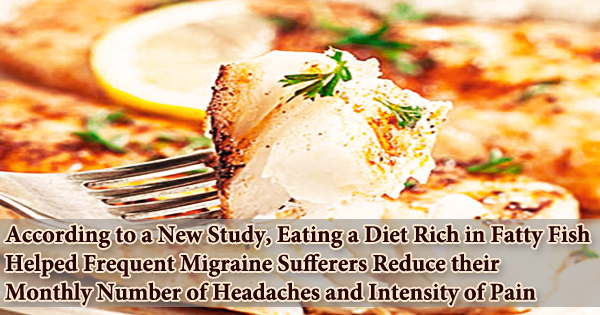 According to a New Study, Eating a Diet Rich in Fatty Fish Helped Frequent Migraine Sufferers Reduce their Monthly Number of Headaches and Intensity of Pain

The team’s earlier research on the effects of linoleic acid on chronic pain was built upon in this study of 182 individuals with regular migraines. Linoleic acid is a polyunsaturated fatty acid found in maize, soybean, and other comparable oils, as well as various nuts and seeds, in the American diet.

Previous smaller research looked into whether linoleic acid irritated migraine-related pain processing tissues and pathways in the trigeminal nerve, the body’s biggest and most complicated cranial nerve. They discovered that a diet low in linoleic acid and high in omega-3 fatty acids (found in fish and shellfish) might reduce inflammation in the pain pathway.

Participants in a 16-week dietary intervention were allocated to one of three healthy diet programs at random. Meal packages with fish, veggies, hummus, salads, and breakfast items were distributed to all participants. One group was given meals with high quantities of fatty fish or fatty fish oils and reduced levels of linoleic acid.

Participants tracked the number of migraine days, length, and intensity, as well as how their headaches affected their ability to perform at work, school, and in their social life, and how often they were required to use pain medicines throughout the intervention period. Participants experienced an average of more than 16 headache days per month, over five hours of migraine discomfort each headache day, and baseline ratings that showed a significant impact on quality of life despite using several headache medicines when the trial began.

When compared to the control group, the diet low in vegetable oil and rich in fatty fish resulted in reductions of 30 to 40% in total headache hours per day, severe headache hours per day, and overall headache days per month. This set of individuals also exhibited reduced amounts of pain-related lipids in their blood. In comparison to the other groups in the research, these individuals reported only small improvements in migraine-related overall quality of life despite the reduction in headache frequency and severity.

Migraine, a neurological illness, is one of the leading causes of chronic pain, missed work time, and decreased quality of life. Over 90 percent of migraine sufferers are unable to work or function properly during an attack, which can last anywhere from four hours to three days.

Migraines are more common in women between the ages of 18 and 44, with an estimated 18 percent of all American women suffering from them. Current migraine medicines typically provide only partial relief and can have significant side effects such as drowsiness, as well as the risk of dependency or addiction.

Chris Ramsden, a clinical investigator in the NIA and NIAAA intramural research programs and adjunct faculty member at UNC, headed the NIH team. Ramsden and his colleagues are experts in the field of lipids, which are fatty acid molecules present in many natural oils, and their function in aging, particularly chronic pain and neurological diseases.

Doug Mann, M.D., of the Department of Neurology, and Kim Faurot, Ph.D., of the Program on Integrative Medicine, headed the UNC team. Beth MacIntosh, M.P.H., of UNC Healthcare’s Department of Nutrition and Food Services, created the meal programs.

“Changes in diet could offer some relief for the millions of Americans who suffer from migraine pain,” said Ramsden. “It’s further evidence that the foods we eat can influence pain pathways.”

The researchers concluded that diet-based treatments that increase omega-3 fats while decreasing linoleic acid sources are more promising than fish-oil-based supplements for helping patients with migraines lower the frequency and severity of headache days while reducing the need for pain medicines. They plan to broaden this research to look at the impact of food on other chronic pain disorders.