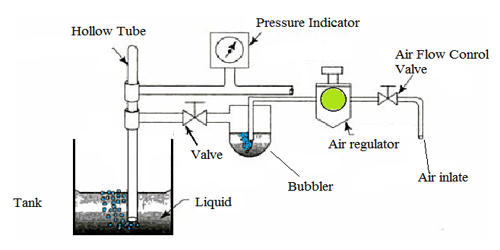 An air purge system is used to flush electrical control equipment with clean air before it is turned on. It is used for level measurement. It is also known as the bubbler method. This ensures that the functionality of the equipment is not affected or damaged by the contaminants from the surrounding environment. This is one of the most popular methods for hydrostatic liquid level measuring system, which is suitable for any type of liquid level. The important considerations for purge air are reliability, cleanliness, and cost.

Air purge systems are employed for control and analytic technology that is exposed to flue gas resulting from an industrial process. The system consists of a source of compressed air, airflow restrictor, sensing tube, and pressure transmitter. When the air pressure from the regulator is increased until the water in the tube is displaced by air, the air pressure on the tube is equal to the hydrostatic head of the liquid in the tube. Purging units are central because they maintain a clear boundary path and also ensure that the optical system of the instrument remains clean during prolonged operation. The only component of the Bubbler System that is exposed to the elements is the sensing tube. Some systems advanced processes serve to prevent corrosion of other system components by flue gas.

The Air Purge System is an inexpensive but accurate means of measuring the fluid level in open or vented containers, especially those in harsh environments such as cooling tower sumps, swimming pools, reservoirs. The multipurpose system incorporates a cleaning, pumping and purging component in one. Its accuracy is independent of the constancy of the density of the material whose level is measured. The system saves time and lowers maintenance while improving the overall operation and accuracy of the instrument.

Applications – This application is advantageous for level measuring applications where it would be inconvenient to mount the measuring instrument at the zero reference level.