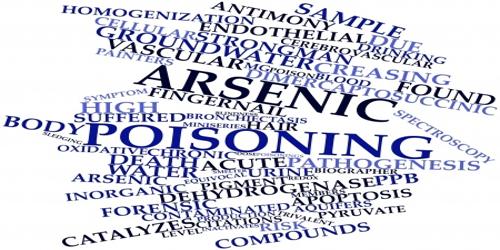 Arsenic poisoning, happens when a person takes in dangerous levels of arsenic. Arsenic is a natural semi-metallic chemical that is found all over the world in groundwater.  It also exists in compounds that may be inorganic or organic.

Arsenic poisoning can cause major health complications and death if it is not treated, so precautions exist to protect those who are at risk. Arsenic is often implicated in deliberate poisoning attempts, but an individual can be exposed to arsenic through contaminated groundwater, infected soil and rock, and arsenic-preserved wood. However, arsenic in the environment is not immediately dangerous, and it is rare to find toxic amounts of arsenic in nature. Sources: Sources of arsenic include:

Occupational exposure can occur in: This is much more insidious and difficult to diagnose.

It is estimated that 29-77 million Bangladeshis i.e. 23 – 62 % of the 125 million populations are at risk of arsenic poisoning. According to some estimates, arsenic in drinking water will cause 5 million deaths in Bangladesh. The World Health Organization (WHO) has called it the “largest mass poisoning of a population in history”. Other countries including the USA, Mexico, China and Chile have discovered arsenic in their water supplies. Chronic arsenic poisoning is likely to become an international health issue and requires research and awareness worldwide. Exactly how arsenic gets into water-soluble form in groundwater remains controversial but some plants have the ability to remove arsenic from the environment.