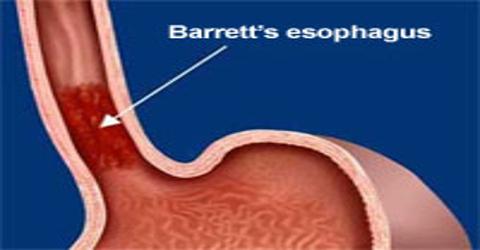 Barrett’s esophagus is a difficulty of chronic gastroesophageal reflux disease (GERD), mostly in white men. In Barrett’s esophagus, usual tissue lining the esophagus — the tube that carries food from the mouth to the stomach — changes to tissue that resembles the lining of the intestine. About 10% of people with chronic symptoms of GERD develop Barrett’s esophagus. One of the major goals of treatment is to stop or slow the development of Barrett’s esophagus by treating and controlling acid reflux. This is done with routine changes and medication. Routine changes include taking steps such as: There are some treatments, including surgery, that are intended specially to focus on the abnormal tissue. They include:

Radiofrequency ablation (RFA) uses radio waves delivered through an endoscope inserted into the esophagus to obliterate abnormal cells while defending the healthy cells underneath.

Photodynamic therapy (PDT) uses a laser through an endoscope to kill abnormal cells in the lining without damaging regular tissue. Before the procedure, the patient takes a drug known as Photofrin, which causes cells to become light-sensitive.

Endoscopic spray cryotherapy is a newer technique that applies cold nitrogen or carbon dioxide gas, through the endoscope to freeze the abnormal cells.