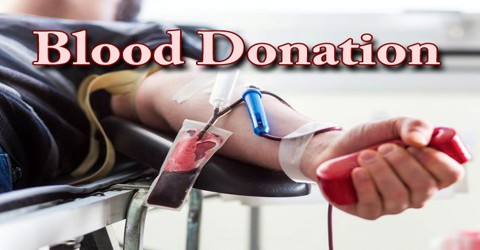 Blood Donation is a voluntary procedure, which accepts the withdrawal of one’s blood by medical professionals, without demanding financial compensation. In the case of a total blood donation, once the withdrawal is performed, the separation of principal blood components is then carried out. In this way, red blood cells (or hematites), platelets and plasma are stored until needed. Blood donation by apheresis implies the separation of cells at the moment of withdrawal, the unnecessary cells being re-injected into the donor. Today in the developed world, most blood donors are unpaid volunteers who donate blood for a community supply. In poorer countries, established supplies are limited and donors usually give blood when family or friends need a transfusion (directed donation). Many donors donate as an act of charity, but in countries that allow paid donation some donors are paid, and in some cases there are incentives other than money such as paid time off from work. Donors can also have blood drawn for their own future use (autologous donation). Donating is relatively safe, but some donors have bruising where the needle is inserted or may feel faint. Blood (or Whole Blood) Donation – This is the most common type of donation, during which approximately a pint of ‘whole blood’ is given. The blood is separated into transfusable components – red cells, plasma, platelets and/or cryoprecipitated AHF.

This type of blood donation usually takes about an hour, though the actual donation takes about 8-10 minutes. People are eligible to donate ‘whole blood’ every 56 days.

During this type of donation, an apheresis machine collects the platelets and some plasma and returns the red cells and most of the plasma back to the donor. Platelets are a vital element of cancer and organ transplant treatments, as well as many surgical procedures as they help prevent massive blood loss.

Plasma Apheresis – Plasma is collected simultaneously with a platelet donation and is collected at select American Red Cross Donation Centers only.

During a plasma apheresis donation, the blood is collected by a machine, which separates the plasma, red cells and platelets and returns the red cells and/or platelets back to the donor.

While donors with Type AB blood can only give red cells to other Type AB recipients, they are the universal plasma donors. The ‘right type’ donation for AB donors may be an apheresis donation of plasma or plasma and platelets.  The donation takes approximately 1 hour and 15 minutes.

Power Red – Power Red is done with the help of an apheresis machine which collects the red cells but returns most of the plasma and platelets to the donor. Red cells are the most transfused blood component, and certain blood types are often in short supply. Power Red from Type O donors and donors with Rh-negative blood types play a very important role in maintaining blood supply levels. Donors need to meet slightly higher hemoglobin and body height/weight requirements in order to be able to give a Power Red. It takes approximately 30 minutes longer than a whole blood donation and allows donors to give two units of red cells. Available in most donation centers and some blood drives. Donors are eligible to give Power Red every 112 days. In patients prone to iron overload, blood donation prevents the accumulation of toxic quantities. Donating blood may reduce the risk of heart disease for men, but the link has not been firmly established and may be from selection bias because donors are screened for health problems. Research published that repeated blood donation is effective in reducing blood pressure, blood glucose, HbA1c, low-density lipoprotein/high-density lipoprotein ratio, and heart rate in patients with metabolic syndrome. Regular donors are often given some sort of non-monetary recognition. Time off from work is a common benefit. Blood is made up of a number of components, including red blood cells, platelets and plasma. Each of these can be used to treat many different conditions. Donated blood or components are given to a patient in a blood transfusion. Blood transfusions are given via an intravenous line into a blood vessel.

Usage varies between hospitals depending on their particular specialties. NHS Blood and Transplant works closely with hospitals to make sure valuable blood donations are used appropriately. The demand for blood from hospitals has fallen due to increased efficiency, but new donors are always needed to make sure there is enough blood to treat those who need it.

Blood can be vital for people with medical conditions or who are having surgery. But blood transfusions can also improve the quality of life for people whose illness has no cure.