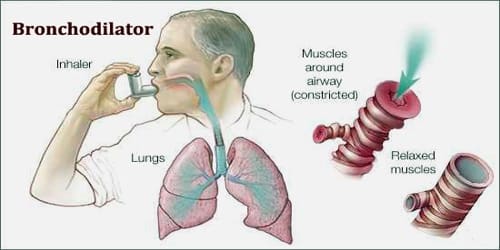 Definition: Bronchodilator is a type of medication used to relax the air passages to help people breathe better. It is a substance that dilates the bronchi and bronchioles, decreasing resistance in the respiratory airway and increasing airflow to the lungs. They are most useful in obstructive lung diseases, of which asthma and chronic obstructive pulmonary disease are the most common conditions. Although this remains somewhat controversial, they might be useful in bronchiolitis and bronchiectasis.

The medications are typically inhaled through the mouth using a metered dose inhaler (MDI) but are also available in liquid, pill, injectable, or suppository formulations.

Bronchodilators are used for treating:

They are often prescribed but of unproven significance in restrictive lung diseases. Beta-2 agonists – Beta-2 agonists (such as salbutamol, salmeterol, formoterol, and vilanterol) are used for both asthma and COPD, although some types are only available for COPD. They’re usually inhaled using a small, hand-held inhaler but may also be available as tablets or syrup.

Drug side effects are usually dose-related and more commonly seen with oral use. The most common include rapid heart rate (tachycardia), heart palpitations, tremors, and sleep disturbance.

Anticholinergics – Anticholinergics (such as ipratropium, tiotropium, aclidinium, and glycopyrronium) are medications that block a type of neurotransmitter known as acetylcholine. Parasympathetic nerves (those associated with automatic function) are the primary source of acetylcholine in the lungs. By blocking the production of these substances, the contractions and spasms in the airways are effectively stopped.

The use of anticholinergics in combination with short-acting β2-adrenergic agonists has been shown to reduce hospital admissions in children and adults with acute asthma exacerbations.

Theophylline – Theophylline is usually taken in tablet or capsule form, but a different version called aminophylline can be given directly into a vein (intravenously) if people’s symptoms are severe. The effect of theophylline is weaker than other bronchodilators and corticosteroids. It’s also more likely to cause side effects, so is often only used alongside these medicines if they’re not effective enough. Additionally, some psychostimulant drugs that have an amphetamine-like mode of action, such as amphetamine, methamphetamine, and cocaine, have bronchodilating effects and were used often for asthma due to the lack of effective β2-adrenergic agonists for use as a bronchodilator, but are now rarely, if ever, used medically for their bronchodilatory effects. General side effects of bronchodilators include:

In most cases, bronchodilators should be taken as normal while pregnant or breastfeeding. Pregnancy may affect the patient’s asthma, so it’s important to continue taking their medication and have it monitored regularly, to ensure the condition is controlled.

Bronchodilators differ in their mechanism of action, how quickly they work, and their duration of action, their uses, side effects, and how they are administered.