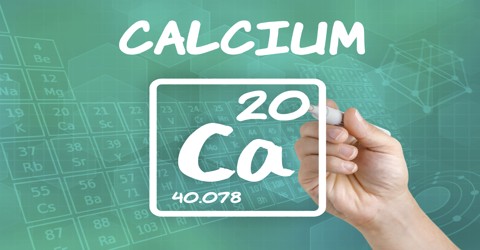 Calcium is a soft, silver-white, metallic chemical element, one of the alkaline-earth metals, found in limestone, marble, chalk, etc., always in combination: it is used as a reducing agent and in fertilizer, and is the essential part of bones, shells, and teeth: symbol, Ca; at. no. 20 Calcium is essential for healthy bones and is also important for muscle contraction, heart action, and normal blood clotting. Food sources of calcium include dairy foods; some leafy green vegetables, such as broccoli and collards; canned salmon; clams; oysters; calcium-fortified foods; and soy foods, such as tofu. Up until the age of 20-25, calcium even builds upon the strength of the bones within the human body. Upwards of 99 percent of the calcium within our bodies is stored within the bones and teeth; however other areas that utilize calcium also store at least small portions of the element. This includes the muscles and the blood in order to regulate muscle contraction, normal heartbeat, and proper blood coagulation.

Calcium is found in a variety of foods, but the amount that your body absorbs varies. Oxalic acid and phytic acid both interfere with the absorption of calcium. Foods rich in oxalic acid are spinach, rhubarb, sweet potatoes, and beans. Foods rich in phytic acid are unleavened bread, nuts, seeds, and raw beans. People will absorb some of the calcium in these foods, but not as much as they would from foods that do not contain oxalic acid or phytic acid. For example, calcium absorption from dried beans is about half of what we absorb from milk, and calcium absorption from spinach is about one-tenth of that absorbed from milk.

A calcium deficiency can trigger life-threatening diseases over time, or generate symptoms such as as seizures and neck pain. Most popularly, osteoporosis has been linked time and time again to an inadequate calcium supply within the body. In the event of a serious shortage, the body will even begin to leech calcium from the bones in order to supply the much-needed calcium into other areas of the body, Souch as: Calcium is tightly linked to many of the roles that vitamin D plays in the body. In bone health and other physiologic systems, calcium is a key player. Calcium is a mineral that must be constantly eaten to build bone and maintain the blood level of calcium. Even though only 1 percent of the calcium in the body is found outside of bone, this form of calcium is critical for many functions in the body. Therefore, its level is maintained in a narrow range in the blood and tissues. Consider some of the key non-bone functions of calcium:

The main role of calcium in the body is to provide structure and strength to the skeleton. In the earliest forms of exoskeleton and in shells, the structural rigidity is generally provided by calcium carbonate. Calcium has a wide variety of applications, almost all of which are associated with calcium compounds and salts.