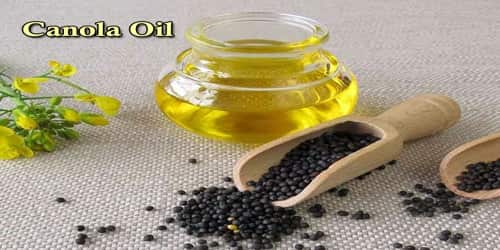 Introduction: Canola oil, or canola for short, originally known as low erucic acid rapeseed, is a vegetable oil derived from a variety of rapeseed that is low in erucic acid, as opposed to colza oil. It comes from the seeds of the canola plant. Once harvested, canola seeds are crushed and the oil contained within the seed is extracted. The average canola seed is 45% oil.

One of the world’s healthiest vegetable oils is extracted from the seeds of the canola plant.

High-protein meal is produced from the other 56% of the canola seed. Canola meal is an excellent animal feed for cattle, poultry, swine, and fish. Production and Nutrient Composition of Canola Oil: Canola oil is made at a processing facility by slightly heating and then crushing the seed. It is refined using water precipitation and an organic acid to remove gums and free fatty acids, filtering to remove color, and deodorizing using steam distillation. The average density of canola oil is 0.92 g/ml.

One study analyzed canola and soybean oils found on store shelves in the U.S. They found that 0.56% to 4.2% of the fatty acids in them were toxic trans fats.

Like most highly refined oils, canola oil is low in essential nutrients.

However, it does contain a little bit of the fat-soluble vitamins E and K.

A typical fatty acid composition of canola oil is:

The oil has many non-food uses and, like soybean oil, is often used interchangeably with non-renewable petroleum-based oils in products, including industrial lubricants, biodiesel, candles, lipsticks, and newspaper inks, depending on the price on the spot market.

Canola vegetable oils certified as organic are required to be from non-GMO rapeseed. Uses and Benefits of Canola Oil: Canola oil is heart-healthy.  It has the least saturated fat of any common cooking oil. In fact, it has less than half the saturated fat of olive or soybean oil. The US Food and Drug Administration (FDA) authorized a qualified health claim for canola oil’s ability to reduce the risk of heart disease when used in place of saturated fat. It has 7% saturated fat, compared to 9% for sunflower oil, 13% for corn oil, and 14% for olive oil.

Overall, canola oil is the third most consumed cooking oil in the world.

Biofuel feedstock is one of the newer uses for canola. It’s the feedstock of choice for Canadian-produced biodiesel because of its exceptional cold weather performance. Compared to fossil diesel, canola biodiesel reduces lifecycle greenhouse gas emissions by 90%.

Regarding individual components, canola oil is low in saturated fat and contains both omega-6 and omega-3 fatty acids in a ratio of 2:1. It is high in monounsaturated fats, which may decrease the risk of heart disease.

The erucic acid content in canola oil has been reduced over the years. It poses no unusual health risks, and its consumption in food-grade forms is generally recognized as safe by the United States Food and Drug Administration.