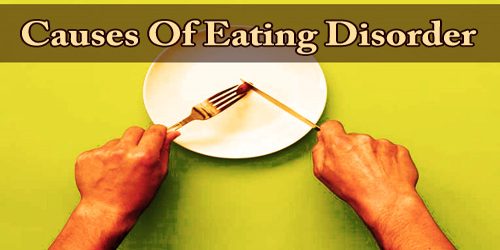 Eating disorders can harm the heart, digestive system, bones, and teeth and mouth, and lead to other diseases. Eating disorders often develop in the teen and young adult years, although they can develop at other ages. With treatment, people can return to healthier eating habits and sometimes reverse serious complications caused by the eating disorder. Treatment varies by disorder and may involve counseling, dietary advice, reducing excessive exercise, and the reduction of efforts to eliminate food. Medications may be used to help with some of the associated symptoms. Hospitalization may be needed in more serious cases. About 70% of people with anorexia and 50% of people with bulimia recover within five years. Recovery from binge eating disorder is less clear and estimated at 20% to 60%. Both anorexia and bulimia increase the risk of death.

The exact cause of eating disorders is unknown; although both biological and environmental factors appear to play a role. As with other mental illnesses, there may be many causes, such as:

Teenage girls and young women are more likely than teenage boys and young men to have anorexia or bulimia, but males can have eating disorders, too. Although eating disorders can occur across a broad age range, they often develop in the teens and early 20s.

Certain factors may increase the risk of developing an eating disorder, including:

There are also many other possibilities such as environmental, social, and interpersonal issues that could promote and sustain these illnesses. Also, the media are oftentimes blamed for the rise in the incidence of eating disorders due to the fact that media images of the idealized slim physical shape of people such as models and celebrities motivate or even force people to attempt to achieve slimness themselves. The media are accused of distorting reality, in the sense that people portrayed in the media are either naturally thin and thus unrepresentative of normality or unnaturally thin by forcing their bodies to look like the ideal image by putting excessive pressure on themselves to look a certain way. Although eating disorders can affect people of any gender at any life stage, they’re most often reported in adolescents and young women. In fact, up to 13% of youth may experience at least one eating disorder by the age of 20.

More recently, experts have proposed that differences in brain structure and biology may also play a role in the development of eating disorders. In particular, levels of the brain messenger’s serotonin and dopamine may be factors. However, more studies are needed before strong conclusions can be made.